The first review today is for historical romance author Shehanne Moore who received a glowing recommendation this week.

Shehanne is also celebrating the release of her latest book. The Writer and the Rake and I will be including that in the Cafe and Bookstore update Monday.

But first on the subject of Loving Lady Lazuli…..

Only one man in England can identify her. Unfortunately he’s living next door.

Ten years ago sixteen-year-old Sapphire, the greatest jewel thief England has ever known, ruined Lord Devorlane Hawley’s life. Now that Sapphire’s dead and buried, all that respectable widow Cassidy Armstrong wants is the opportunity to keep her good name, and prove she is not that disreputable girl. Especially when it means so much to her handsome new neighbor, Devorlane Hawley.

Hawley believes he knows precisely who his new neighbor is, and he’s been waiting ten years to exact his revenge. All he needs is a bit of evidence, which has proved quite impossible to procure. But the lovely widow might just have something else he desires, some other way to sate his vengeance. Deciding a direct approach might be in order, he asks Sapphire to choose her fate—take him as her lover, or take her chances at the end of a rope…

According to Romance Writers of America, romance books garnered $1.08 billion in sales in 2013 and accounted for 34% of the fiction market. With stats like that, I’m wondering why I didn’t choose the romance genre but then I remembered — I have no talent for it.

It’s been decades since I read a bodice-ripper if you don’t count the Outlander series by Diana Gabladon which markets itself as romance, but is really a hybrid — the love child of Romance and Historical Fiction — and I may have never read another one if I didn’t chance upon Shehanne Moore’s blog and struck up a friendship with the Lady Shey.

Now, announcing your desire to read a virtual friend’s book and write a review can be a tricky process even if they don’t live across the street from you because, well, the blogosphere has limits, too, writer’s tend to travel in the same circles, and you just don’t want to hurt anyone’s feelings. Thank GOD that I just adored this book because all that worry is now a moot point. After reading a few chapters of Loving Lady Lazuli, I was hooked. Moore writes a self-described brand of romance that she calls “smexy”— a cross between smutty and sexy — a classic pot-boiler of a book with the trademark characteristics of historical fiction adding to its allure.

Loving Lady Lazuli is the story of Sapphire, the renowned London jewel thief who no one has ever seen. Sapphire’s greatest defense has been her invisibility. Her many costumes and identity changes have allowed her to remain elusive and because of that, the most successful jewel thief in England. But one evening Sapphire makes a terrible mistake. Her “mark”, the famous Wentworth emeralds, are in her grasp, but the escape route is not. Her partners have let her down and there is no way out except a long trek across an open field in winter, and in an evening gown, no less.

Complicating matters, there is a witness, the rich, young, handsome Devorlane Hawley who happens upon the bewitching Sapphire while driving by in his coach. The unsuspecting Hawley has no idea what’s happening when he offers Sapphire a ride. It all happened so quickly, that kiss, that hand where hands should not be when strangers are involved, the pawning off of the Wentworth emeralds into Hawley’s pocket without him even knowing, and her alighting from the coach before he could catch his breath and clear his addled brain. Months later, he’s been enlisted into the army, the rich man’s version of punishment for a theft, preferable to hanging from the end of a noose, but still a high price to pay for a crime he didn’t commit. She caught him all right, with a breathy kiss and a swift goodbye and he will use all his resources to exact revenge.

For ten years Devorlane harbored his enmity, for ten years, he replayed the events of that night, and for ten years he swore that one day he would find and catch Sapphire and make her pay for ruining his life. Ten years of feeding and nourishing that hatred which festered like the wound to his leg when, upon his return, he is met with a sight that makes his heart both soar and shatter — it’s her, Sapphire, sitting in his drawing room. Now who’s caught?
Want to find out? Then read Loving Lady Lazuli, a romantic page-turner of first order. You may want to ditch the tea and crumpets for something stronger!

Read all the reviews and buy the book: https://www.amazon.com/Loving-Lazuli-London-Jewel-Thieves-ebook/dp/B00HW9QTP2

Find out more about Shehanne Moore and her books: https://www.amazon.com/Shehanne-Moore/e/B00CMBK7BW 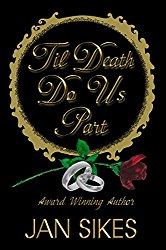 The next review is for Jan Sikes and the fourth book in her series that follows the life of Texas Musician Luke Stone. A passionate love story set in the rowdy raucous honky-tonks of Texas in 1970. Nothing could have prepared Darlina Flowers for the reckless Texas rogue musician, Luke Stone, to come stampeding into her life like a team of wild horses. Their love ignited into an ever burning flame only to be split apart by fate and circumstance and separated by walls and bars. Luke Stone is arrested and falsely convicted of a crime he did not commit.  Based on the compelling true story of Rick and Jan Stone.

About Til Death Do Us Part

Veteran Texas musician, Luke Stone, has cheated death more times then he cares to remember. He’s been everything from a simple farm boy to a rowdy roughneck, a singing star to a convict and finally a husband and father whose goals consisted of building a home and raising a family…which he did. Now, with a chance for a second music career, he knows the sand in his hourglass is running thin.

His anchor in life and true love, Darlina, stands at his side determined to help make the dream a reality. But, his aging body is sabotaging every effort and the only thing that keeps him going is sheer will power and the love he has for Darlina. When faced with being confined to a wheelchair for the rest of his life, Luke draws on every resource to continue to function and contribute to their home and to society.

This is a story of inspiration, endurance and most of all undying love. When Luke and Darlina face life-altering situations that would destroy a lesser man and woman, they draw on each other’s strength and determination to face them. Will fate allow Luke to sing his last song?

Remarkable conclusion to the true series of the life and love of Luke and Darlina (aka Rick and Jan Sikes). ‘Til Death Do Us Part had me rejoicing for their happiness as cook-outs, weddings, etc. highlighted their quality time together. Yet, I was equally heartbroken over the many health issues Luke had to endure. With Darlina at his side through it all, my heart broke for her also. So sad, and so inspiring.

A tiny glimpse into some Texas politics emerged as Darlina was requested to come up with $2,000.00 for Lukes parole. She complied. The old saying,”money talks, justice walks” was not completely applied to this instance. After $2,000. was paid, Luke received his parole.

This book speaks volumes to me. I will never forget the owls.

Special thanks to author, Jan Sikes, for sharing all four books in the series! Well done! I highly recommend the entire series! 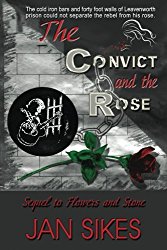 Find out more about Jan Sikes and her books: https://www.amazon.com/Jan-Sikes/e/B00CS9K8DK

Thanks for dropping by and if you are an author who has received a great review that you would like to share then drop me a line to sally.cronin@moyhill.com. If you are in the bookstore then I will feature either in this promotion or the Cafe and Bookstore update.  Please let me know. Thanks Sally