I first published the following story in February of this year and at the time Donata Zawadzka had just been introduced to me by Paul Andruss.  Tales from the Irish Garden was just a twinkle in my eye, but I was already writing some stories down to be included.

Eight months on and I am delighted to say that Donata has now produced four wonderful illustrations that I will be using as part of the artwork for the collection. Because I loved this illustration so much, I have also bought the original to use in the book with this story.

Tales from the Irish Garden, follows on from Tales from the Garden which was set in Madrid.  Queen Filigree will be forced to relocate from her home in the sun in Spain to her cousin’s kingdom in Ireland… expect some misadventures along the way. New characters such as Jeremy the Donkey will play their role in making Queen Filigree welcome, and there will be badgers, mice and eagles…

This story was prompted by the stunning illustration by Donata Zawadzka and you can find out more about this talented artist after the story. 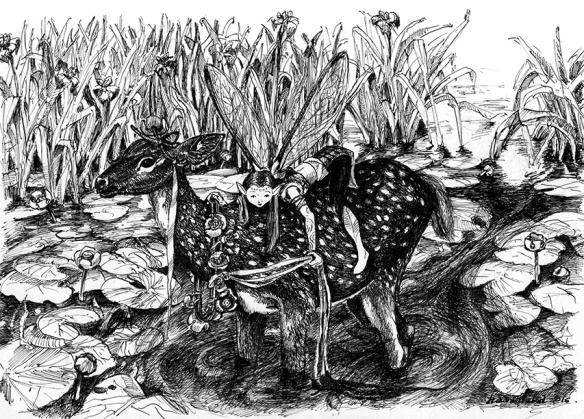 Princess Persephone slowly and painfully regained consciousness, and keeping her bleary eyes closed, tried to establish exactly where she was. Her wings might have been gossamer thin and delicate, but right now they felt like a ton of bricks. Her head was pounding and it seemed that her body had been stretched over a barrel that was making munching noises.

She felt obligated to make some form of protest at this treatment, but found that her mouth was so dry, her tongue was glued to the roof of her mouth. By all the gods, including Zeus and Hades, what had someone done to her? The last thing she remembered was drinking some gold label, honey nectar made by the Lerpersian brewery in a cave near Glendalough. She was sure she had only had a couple; it had tasted as sweet and innocent as its name.

The crunching and chewing sounds continued beneath her, and finally she managed to open her eyes; nearly falling off the barrel. In front of her face was a delightful tiny straw hat, perched between two very large ears sticking out at right angles. Persephone burped in a very un-regal manner and covered her mouth with a shaky hand.

‘Are you talking to me?’ she heard a rather squeaky voice from somewhere in front of her. Persephone managed to raise herself up into a sitting position and without making too many sudden moves, surveyed her surroundings.

‘Hello, is anybody there?’ She glanced from left to right, carefully manoeuvring her still weighty wings. She waited expectantly; head tilted to one side.

‘It’s about time you woke up you little madam,’ the voice seemed clearer now that the chewing sound had ceased.

‘I have been carrying you all night and my feet are killing me.  Which, if you are wondering, is why we are in the middle of this stream of cold water.’ The head attached to the hat and ears in front of her swung around, so that one very large brown eye was staring up at her.

Persephone was now very confused and began to suspect that someone had slipped a Micky Finn into her class of honey nectar last night. Her mother Queen Filigree had warned both her daughters that some boyo might take advantage of the visiting princesses to the festival, and to make sure they kept an eye on their drinks at all times. She was in so much trouble, and no doubt she had managed to ditch Narcissus at some point and would get it in the neck; a frequent occurrence.

She had to get out of this hallucination as quickly as possible and find her way back to the festival site. She must find her sister quickly and return home with her, otherwise she would have her wings clipped for the next month, and be locked in the dungeons in the palace under the oak tree for good measure.

She tried to slip off her mount into the water, and in the process discovered that she had been riding a sizeable spotted deer. What was even weirder was that it seemed to be decorated with bits and pieces of her sister’s eclectic outfit she had been wearing last night. Including that saucy fascinator now perched between its ears.

‘Oh no you don’t missy,’ a protesting voice issued forth from beneath her. ‘Now that you are sobering up, you can undo the damage you did last night.’

‘Damage, what damage?’ Persephone was becoming irritated by this badgering that made her head pound even more. ‘I’m the one who has been drugged and stuck in the middle of this hallucination with you; so back off.’

Having finally managed to slip off the back of the deer, Persephone found herself up to her knees in the freezing water. She was also now on the level of the animal’s head and could look straight into those big brown eyes that appeared to be vaguely familiar.

‘Now do you get it you little spoilt brat?’ The harshness of the words and tone were slightly alleviated by the sight of several lotus blossom stems hanging from the sides of the deer’s mouth.

The enormity of the situation had a sobering effect on Persephone as she lifted her legs in and out of the icy water. Things were beginning to come back to her and this was definitely not good. Not good at all.

She clung to the neck of creature. and as she felt the big heart thumping away beneath her hand, it brought back the hypnotic sound of the drums reverberating around the camp fires at the festival last night. As the honey nectar had taken effect, she had felt herself released from her regally ingrained decorum; rising to her feet to dance in time to the intoxicating beat.

Despite her sister’s repeated protestations, Persephone had been swept away with the other revellers, in a wild and organic melee. She swayed as she remembered the thrill and the fever of that freedom.

‘I see it’s coming back to you madam, and you better sober up fast because I am not carrying you any further.’

Persephone decided that if she was not to freeze her sparkly boots off, they had better move from the stream on to dry land. She gently grasped the halter of flowers around the deer’s neck, leading her onto a grassy bank strewn with daisies. These proved irresistible to the animal, who dipped her head to chew enthusiastically.

Persephone lay back in the softness of the emerald coloured grass and white and yellow flowers for a moment; then shot upright and placed her head in her hands.

‘What you have done missy, is to cast a spell on me last night, just because I was trying to stop you making a Lerpersian of yourself in front of all those strangers.’

The deer wandered over and her fascinator fell off her head and into Persephone’s lap. Her sister picked it up between shaking fingers and looked up into the eyes that she knew so well.

‘You better be able to fix it missy, otherwise mother is going to exile you to live alone on Inishtooskert for the rest of your life,’ a hint of maliciousness crept into the vitriolic tirade.
‘You will never meet a Prince Charming there, will you?’

Persephone could tell that Princess Narcissus, who she often told people was aptly named, was getting more and more riled up and that never bode well.

‘I know, I know, don’t worry I can fix this,’ and with that she scrabbled around in her hessian bag that was still thankfully slung around her body. Desperately she searched the deep and dark interior looking for her spell book. Finally, just as she thought that it had fallen out as she had rolled drunkenly around on the deer’s back, her fingers closed over the spider’s web cover.

The dark brown eyes of her sister looked on expectantly as Persephone flicked through the book of spells, one minute nodding her head, and then the next shaking it in frustration. Then with a huge sigh of relief, she found what she was looking for.

She stood up shakily, and placing her right hand on the large wide forehead of the deer, she uttered the required antidote to the original spell.

‘Flabbergast and Flippity Gibbet with a twist of flighty fingers of fidgeters, return my sister to her original body,’ she paused and then added a little insurance policy. ‘And befuddle her brain into forgetting all that passed last night.’

Which is why, the disgraceful shenanigans of the young Princess Persephone, have remained a secret until today; and are only being revealed to you, the select few.

©sallycronin Tales from the Irish Garden 2017

I think you will agree that Donata’s work is stunning. Perfect for children’s books, fantasy and fairy tales and of course book covers.  I am so looking forward to sharing the other illustrations that she has completed for the book.

I hope you have been entertained by the excapades of Princess Persephone.. I am sure that she will be getting up to more mischief in the future.. not so sure about Princess Narcissus!   Thanks Sally