In the last few health column posts I have covered the upcoming influenza season with news of a mega-vaccine and how to boost the immune system to prevent infection. I also mentioned the preventative and therapeutic properties of Echinacea and  in this post I want to follow up with another herb with similar properties but is not quite as popular. 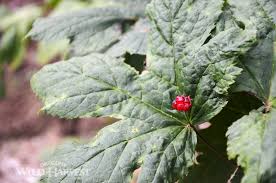 Echinacea is an herb that might help prevent infections from colds and also help alleviate the symptoms if you actually caught one. Goldenseal has similar properties and also has a number of other reported medicinal properties including being anti-bacterial, anti-viral, anti-fungal as well as being full of nutrients. It contains Vitamins A, C and E, B-complex, calcium, iron and manganese.

Like Echinacea, Goldenseal was used by the Native American Indians, in particular the Cherokee, for centuries in their pharmacy of natural herbs. Its distinctive yellow colour also made it a perfect dye for clothes and blankets.

Goldenseal is a member of the buttercup family and it is the root that is used in medicine. Originally it was most probably used for infections and to treat irritations of soft tissues, especially the eyes.

The mucous membranes of the body are found in the nasal passages, throat, digestive tract, respiratory tract and urinary tract. They are slimy to the touch in order to prevent bacteria sticking to their surfaces and reproducing and causing infection. They are also the first surfaces to become inflamed and irritated when we catch an infection. Goldenseal works by increasing the immune system energy and also increasing the circulation right under the surface of the membranes, which helps eliminate the waste faster and speed up the healing process.

There are a number of conditions that involve mucous membranes that can be helped by taking the herb – apart from colds and flu – including sinus infections, mild bowel inflammations, upper respiratory infections, urinary tract infections and eye irritations.

Quite a potent combination is to take both Echinacea and Goldenseal when you begin an infection. As you may know, Echinacea stimulates the immune system by increasing the activity of the white blood cells that destroy harmful bacteria and viruses.

Would love your feedback of course.. thank you and have a great week.. Sally