This week we dive into the archives of Jaye Marie and Anita Dawes.. and a post from Jaye about a change in her writing process.

Moments of Madness by Jaye Marie

I did something stupid today. In fact it began a few weeks ago, when the tiny germ of an idea slipped into my mind and wouldn’t go away.

It was something my friend Bru (February Grace of http://februarywriter.blogspot.com) had said about how she often wrote and blogged from the comfort of her bed. The poor girl has days when she is too ill or uncomfortable to get up, but still wants to do what she loves most, which is writing. I have this mental picture of her, snug and comfy in her pyjamas, ensconced in bed with her trusty laptop, and the idea just took root in my head and began to grow.

Not that I want to write in bed, but with my ever increasing workload, I have to make even more time available to me. Who knew the writing and self publishing world would create this much work, I certainly didn’t in the beginning.

For a long time now I seem to spend most of my evenings with puzzles and Sudoku while the family watch television. I love most of the programmes and it is good to relax at the end of the day, but find it increasingly hard to see them properly as my distance glasses make me so very giddy and ill I cannot wear them. Consequently I find myself just listening and limit my eyesight to things I can do on my lap as my reading glasses are fine.

I have discovered that I cannot read while the television is on, but can manage other things, like writing notes. You can see where I am going with this, can’t you?

The thought of having a laptop has interested me ever since the family members bought theirs, but always dismissed the idea as pretty stupid as I am basically a technophobe. You know, someone who hates technology with a passion, usually because we are hopelessly unable to grasp the basics, let alone all the clever stuff.

I have struggled to learn how to use a computer, my mind obviously not properly equipped with the necessary bits to understand or implement the information that I do eventually manage to discover.

This is where it has paid dividends to be one of the most stubborn people on the planet. Something I am more than proud of, as because of this, I have achieved much more than I think I would otherwise have done.
Computers are brilliant but confusing, time saving but frustrating, and I am more than sure they lead to insanity, at least in my case.
But… I have mastered my computer, how hard could a laptop be?

I saw one I like the look of, a combined laptop with a tablet which made it very versatile. Just what I needed to make better use of my evenings.

It arrived yesterday. As I unpacked it, the shiny red alien exterior gleamed in front of me. I looked at it and thought, ‘Now what do I do?’

The instructions were sketchy to put it mildly, apparently all the information is on the machine and you learn as you go. (That’s if you get as far as switching it on) I was instantly terrified.

What on earth had I done?

I ignored it for over an hour and went about my business, but found myself sneaking looks and wondering if I could possibly…

To cut a long story short, I did finally pluck up the courage to turn it on, and for several hours I blundered about, pressing this and swiping that, until I had a rough idea of what to do. What made it worse for me I think was that it came with Windows 8, where I am used to Windows 7, but having said that, it is a marvellous piece of equipment and I should be able to accomplish a load more work with it.

Once I have ironed out all the wrinkles, both its and mine of course!

I think we have all been there, done that and got the t-shirt when embracing new technology. I have always felt it is something to do in private where making the initial errors can be dismissed as practice.. then emerging into the world fully fledged.  Thanks to Jaye for sharing her technological adventure.

Most people may know me as one-half of the writing partnership, Anita & Jaye Dawes, and I have come to writing quite late in life. I always used to think I didn’t have an ambitious bone in my body, content to potter about with my many craft hobbies. Always preferring to be in the background and invisible if at all possible.

And for the last ten years since my retirement, that’s what my life has been like. I love books and have read my way through stacks of them, so when my sister-in-law Anita needed someone to edit and type up her manuscripts, I was happy to help and that’s when I discovered my vocation.

Then one day everyone was talking about “Indie” or self-publishing. Now, I knew only too well how hard it was to be published the traditional way, so I became very excited at the prospect of being able to do it ourselves.

At first, I concentrated on publishing Anita’s books. It wasn’t quite as easy as they made it sound, but with my usual stubbornness I kept at it, learning more and more as I went along, and somewhere along the way I starting thinking about a story that had been nibbling away in the corner of my mind for months.

I tried to ignore it, but before too long, The Ninth Life demanded to be written and turned out to be a Mystery/Thriller. I am reasonably pleased with the outcome, basically to be honest, because my characters took charge and practically wrote it for me! They had quite a say with the sequel too, and I am proud of our achievements!

I also enjoy running a website/blog and all the wonderful people I continue to meet from all around the world. I learn something new every single day and it is much appreciated.

Connect with Jaye on Social Media. 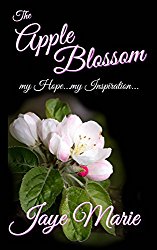 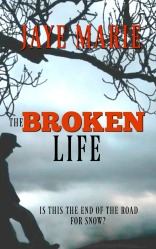 A review for The Apple Blossom

I did wonder why there was a picture of apple blossom on the front cover of this book, which is a very short (14 pages) but factual story of the author’s thoughts and feelings on her diagnosis and treatment for breast cancer (the treatments are not described in too much detail). However, the significance of the apple blossom became apparent as I read on. I finished the book in 20 minutes, and can sympathise entirely with Jaye Marie’s dread of radiotherapy, as I underwent 30 of these treatments myself for a different type of cancer earlier this year.

The book was well formatted, and I found only a couple of typos. Doctors, nurses and radiologists try their best to make us as comfortable as possible during our treatment, but at the end of the day a course of radiotherapy is something that ultimately augments a cancer sufferer’s capability to endure. We can take along CD’s to try and blot out the clicking of the tomography machine, but it is unfortunately an endurance test. Well done to Jaye Marie though, for passing the test with flying colours!

Read the reviews and and buy the books: https://www.amazon.com/Jaye-Marie/e/B00O2ZUFOK

Next week a Christmas short story from the other member of this writing partnership.. Anita Dawes.

The Christmas promotions have begun and there are a number of ways that you can participate and here are two posts to show you how.