Welcome to another piece of Flash Fiction from children’s author Jemima Pett. She mentioned when she sent through the short story that it mirrored her life growing up… as you will see.. What it must be like for the fairy on top of the Christmas tree….

Christmas Past by Jemima Pett

The fairy clambered over the pine needles and came face to face with the globe of blue and white swirls on its golden surface. It was a grand reunion. She remembered when she’d first seen it, that Christmas in 1968 when everyone was watching the pictures from the spacecraft. She rested a while, contemplating Christmases past.

She’d been with this tree for years now, ever since she was a wee thing not long out of fairy-school. There had been another one. She’d played with that for two years and learned about the Outside from it, since that was where it spent the rest of the year. She would have liked to go outside with it and guard it properly, like a fairy should, but it said it was safe the rest of the year, and the fairy could rest in peace and quiet once her main task was done.

This tree lived in a box, like she did, once the season was over. They used to live at the top of a cupboard, but now they lived under the stairs. It wasn’t as quiet, but it was safe.

Each year when she came out of her box, she looked around to check where she was. For the first twenty years it had been a pleasant, east-facing room with a chimney and a coal fire. There was one long chair and two armchairs. The family sat and watched the picture box in the corner, or read books, or played games. She used to watch them do that, wondering if she could ever learn how to count money to buy Mayfair. Each year the children grew taller, then they disappeared. The girl always came back, and the middle son usually came for the day. She didn’t know where the others went, although the eldest came to see her now.

One Christmas she had a surprise. She was in a completely different place. This was a very light room, facing south, and it was always warm. The picture box was in a different corner, closer to her, and was much larger. The adults were, well, greyer than she remembered them, and the children were taller than ever. The same size as the adults in fact. About five years later there was a baby again, she came with the middle son and another woman the fairy hadn’t met before. It was nice having children around again. That continued for about five years, then they didn’t visit but her two old people went out, maybe to see them, she thought.

Another twenty years passed before anything else exceptional happened. She was taken aback when she found herself climbing the tree in a new place, in a bay window right next to a road. The room was low and dim, and quite small, although pleasant enough with pretty furniture. They were so close to the road she could watch the children going up and down the pavement, going to and from school, and then other people hurrying past, going up the hill in the morning, and down it again in the evening. The girl of the family was the only one in the house, and she went out in the morning and joined people going up the hill, too. The following year the room was even smaller. The tree was perched on a box in a corner by a bookshelf. All the furniture was squeezed into one room. She wondered what was happening, but the girl was there, and people visited, and they had a nice Christmas, so the fairy assumed all was well.

The following year the tree was in another new place, this one. Some years she was in the front window, and others she was in the corner of the living room. The tree didn’t have any comment to make, but then trees aren’t given to making comments. She would have liked a little conversation though. It could be lonely being a fairy.

She looked at the blue and white swirly globe. She could just make out her face in it. She was looking a little older, wings a bit tattered round the edges, but she was still as dainty as ever. I’m not as fit as I was, though, she muttered as she started her climb up to the top branch. There were no swans clipped on the branches now, but there were some pretty shiny birds who didn’t have much conversation. The big snowball had gone, and so had many of the old ornaments. The pretty purple bell was there, joined by more bells, small glass ones with ornaments making the clangers, and larger, wooden ones, beautifully decorated, who had introduced themselves very politely and explained they’d come from India. There was a reed-woven llama on a long string that spoke of a lake high in the mountains of Peru. There were matching gold and red globes with elegant decorations that told her of a much smaller tree they had decorated in the small room where the road was so close.

Christmas tree 2012She climbed past the icicles, only two of them now, but they were even older than her. Old. It was funny being a fairy on a Christmas tree. Work hard for a few weeks once a year, and count the years go by. She reckoned she must be the same age as the girl, now grey-haired, who sat and enjoyed her Christmas once again with her brother.

This was a nice house, she thought, as she did every year. She was lucky to have found a family that looked after her. She climbed past the little angel ornaments, one with a light, one with a lamb, another with a star and the last with a little tree. They were older than her too.

She reached the final ascent. She climbed over the end of the tinsel, shinned up the twig to the top light, and took up her place.

She always made sure her family had a merry Christmas. 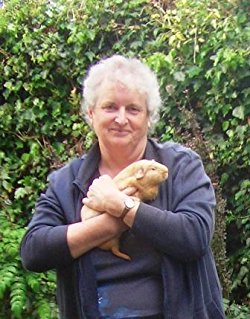 When Jemima Pett discovered the words ‘portfolio career’ she realised she was an example of a new trend – having not only a number of different jobs, but in totally different fields. These included social work, business management, computer technology, environmental research. The thread running through all of them was communication – and that continued in her spare time with writing and editing club magazines, manuals, reports… Jemima loved words, loved to learn and to apply her learning to the real world.

Eventually the world just wasn’t big enough, and so she went back to inventing her own, as she had as a child. First came the Realms, a feudal England run by princes in castles who just happen to be guinea pigs – although you can read them as people equally well. Then came the Viridian System, a planetary area on the outskirts of known space where a frontier mentality mixes with big business and tourism. Her next project could be anything from a D&D fantasy type world, to a children’s picture book about the real adventures of her guinea pigs, who live with her in a small village in Norfolk, UK.

One of the reviews for Book 7 of the Princelings Series Willoughby the Narrator.

I loved hearing Willoughby’s whole story, and thought the addition of some of his tales when he’s telling them was a nice touch.

Geoffrey was often sought out for his memoirs of Imperial Airways in Africa. After his death in 2005, he left a box of memorabilia including his photograph album and a set of tapes dictated between 1995 and 2004. His daughter, J M Pett, has laboured over the contents, producing this book to place the information out in the wider world. More content and links to archive material are on the website http://whitewaterlandings.co.uk.

“a remarkable and significant piece of aviation and colonial history… shining through his memoirs is a capacity to ‘make do’…, and the sense of the Imperial ‘family’ as a source of identity, support and obligation away from home. … he reveals anxiety and frustration,cynicism for arbitrary authority… Told fondly, plainly and modestly, with touches of humour, Geoffrey’s story reads easily and lingers long. The text is equally delightful as family history, autobiography, and colonial history.” — Professor Gordon Pirie, Deputy Director of the African Centre for Cities, University of Cape Town, and Editor of the Journal of Transport History

Read all the reviews for all the books and buy: https://www.amazon.com/Jemima-Pett/e/B006F68PVE/

My thanks to Jemima for this lovely story in tribute to the fairy on the top of the tree.. Don’t forget to thank yours this year… Sally