You might be surprised to know that Marcia Meara is a Christmas fanatic… especially when it comes to trees and her collection of Santas.. some of which are 70 years old.. But, seeing is believing and here is just a handful of photos in evidence.

More Christmas at the House of 1,000 Santas by Marcia Meara

Okay, for those of you interested in such things…few though you may be…here’s another peek at what a 50-year collection of Santas looks like. Because I didn’t get everything put out this year, thanks to an unrelenting editing deadline, these pictures were taken 3 Christmases (and a dozen or so Santas) ago. Things are pretty much the same, except for a bit less this year, because…as I mentioned…deadline! Hope this puts you in the holiday spirit…or makes you want to avert your eyes. Whichever makes you happier.

A full-length photo of my six-foot tall Santa, with no lights out on the tree this time. 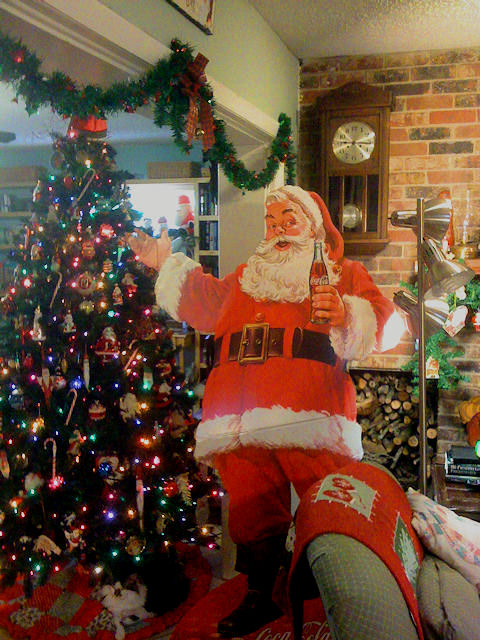 My library tree, with St. Nicholas on top. 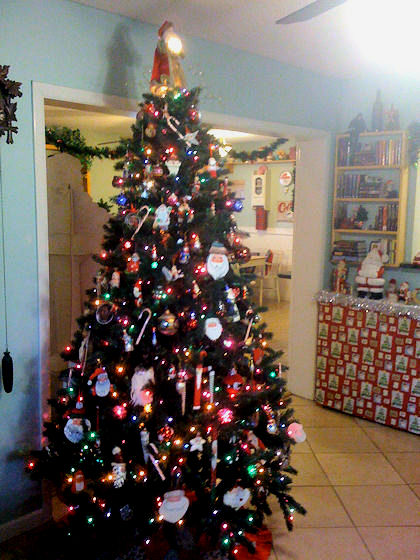 The Pass through from the library to the kitchen and the Holly Jolly Santa shelf. 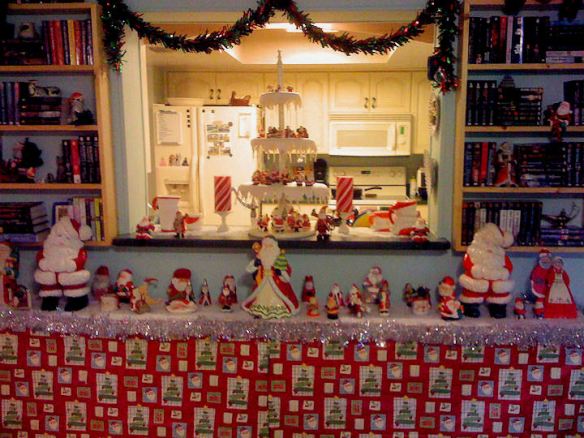 On the kitchen side, my collection of miniature Santas, one of which is over 70 years old. 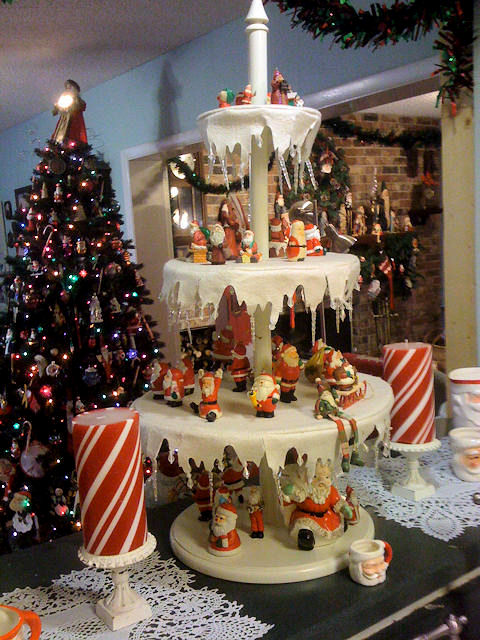 And last, a blurry overview of the family room. If you prefer warm, traditional, and cozy, this is the spot. (Over 50 Santas on that mantel, btw.) If you like frosty snowmen and icicles, the living room’s where you’d want to hang out. Me, I love both, and have room for both now, so, what the heck. I’m not a less is more kinda person. In fact, I’m pretty sure more is more, especially at Christmas!

And speaking of Christmas, my sincere and happiest wishes to all of you. May you have the best one, EVER! 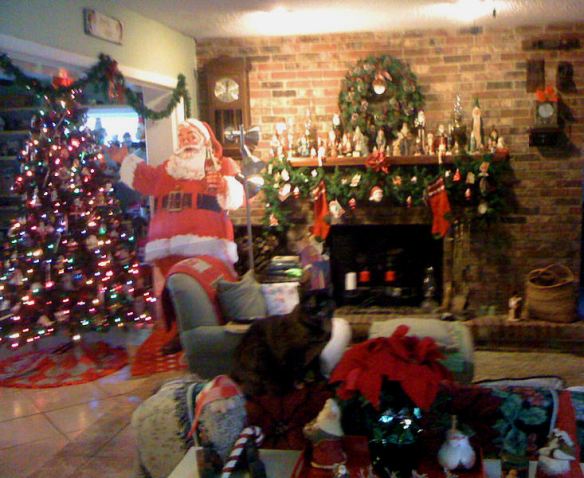 You can see more of Marcia’s amazing collection: https://marciamearawrites.com/2014/12/23/more-christmas-at-the-house-of-1000-santas/

Marcia has selected this piece of festive music to share with you. George Winston with Carol of the Bells

Marcia Meara is a native Floridian, and lives in Sanford, just north of Orlando, with her husband of 30+ years, four large cats, and two small dachshunds. When not working on her books and blogs, she spends her time gardening, and enjoying the surprising amount of wildlife that manages to make a home in her suburban yard.

At the age of five, Marcia declared she wanted to be an author, and is ecstatic that a mere 64 years later, she finally wrote “Wake-Robin Ridge,” her first novel. Making up for lost time, she has published five more novels and a spinoff novella over the last four years.

Now for an update on the recent release by Marcia Meara, The Emissary – A Riverbend Spinoff Novella which follows the story of a previous character in the series. 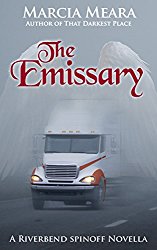 Was Gabe Angelino, the mysterious truck driver in Finding Hunter: Riverbend Book 2, really an angel, as Willow Green believes? Or was he simply a good man, determined to help a stranger in need? Find out, as author Marcia Meara reveals the truth in the first Riverbend spinoff novella, The Emissary.

An angel’s work is never done—that’s part of the gig. But angels hadn’t been created to deal with such a vastly over-populated planet, rife with misery, suffering, and general chaos. Helping souls in peril has become a nearly impossible job, and even angelic tempers are frayed.

The archangel Azrael has had enough. He believes he’s found a way to ease their burden while saving jeopardized humans, too—hired help.

When Jake Daughtry lost his life rescuing a total stranger from certain death, he was on the fast track to Heaven. But that was before Azrael pulled him right out of line at the Pearly Gates. Now, as an Emissary to the Angels, Jake is taking to the highway in a quest to help souls in trouble. But the innate stubbornness of human beings bent on self-destruction is a challenge unlike any he’s ever faced.

It’s up to Jake and Azrael to bridge the gap between humans and angels. Will they ever convince the Council of Angels this endeavor is worthwhile? Can Jake figure out how to play by Azrael’s complicated rules? Will Azrael ever master the use of contractions in general conversation?

To find out the answers, hop on board Jake’s big red-and-white semi and travel the roads from the Florida Keys to north Georgia on an adventure that will make you laugh hard and cry even harder.

A recent review for the book.

As a spinoff, I wouldn’t recommend reading this before the Riverbend books, unless you don’t mind plot spoilers. If you read Finding Hunter, and wondered what was up with the mysterious Gabe Angelino, this book will answer all your questions.

This is a perfect read for this time of year–cozy, magical, and even set in winter. Jake Daughtry, AKA Gabe Angelino, died–and then the angel Azrael put him to work helping lost souls. There’s liable to be some issues along the way–angels aren’t the cuddliest of people, and Jake has a bit of a sense of humor–but there’s also going to be wonder, and hope, and examples of humanity’s best and worst.

At 105 pages, this story packs a lot into a short amount of time, making it a great read for a busy season, without the story being rushed. It wraps up satisfactorily at the end, but leaves more room for the next adventure. And in between–is a sweet story, full of faith without hitting too heavily on dogma, willing to have a little fun with the idea of angels, and the emissaries they might need to get their jobs done.

The relationships between the characters grow pretty quickly like any novella, but are engaging for all that. There’s not as much space for lovely descriptions of the landscape, but there are song titles and funny place settings at the chapter headings, such as “close to here but not far from there.” It’s a story of journeys, physical and spiritual, and always in motion. No matter the tragedies that form obstacles along the way, you know that there will be a happy ending coming, because this is that kind of book–the sort that wraps you like a warm blanket. A great read for fans of Marcia’s work, and fans of cozy mysteries with a bit of the supernatural.

Read the reviews and buy the book: https://www.amazon.com/Emissary-Riverbend-Spinoff-Novella-ebook/dp/B075Y2T3CL

A selection of other books by Marcia Meara 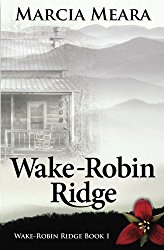 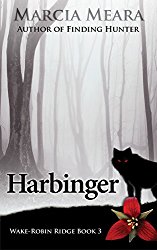 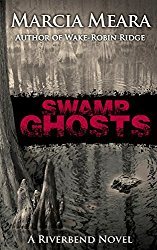 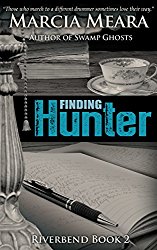 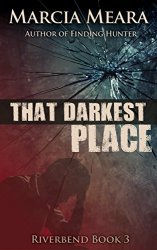 Read all the reviews and buy the books: https://www.amazon.com/Marcia-Meara/e/B00EUCXRU4

My thanks to Marcia to sharing this post in Christmas week and I am sure that you join me in wishing her and her family a Merry Christmas too.. thanks Sally

40 thoughts on “Smorgasbord Posts from Your Archives – More Christmas at the House of 1,000 Santas by Marcia Meara”