Welcome to the Sunday interview and this week my guest is author Billy Ray Chitwood.  Before we find out which of the questions Billy Ray has chosen to respond to… here is his official biography.

An Appalachian hill boy from east Tennessee, Billy Ray Chitwood has family roots that go back to tenth century England and a hamlet just north of London called Chetwode.

Billy Ray received his Bachelor of Arts degree from Lycoming College in Williamsport, Pennsylvania, taught high school ‘Advanced Writing’ in Lorain, Ohio. He has served honorably and proudly in the United States Navy. Aside from sales/marketing management positions with top textbook publishers, he has been a model and an actor in film, stage, television. He is still active in his own business as the CEO of Chitwood, Inc.

Billy Ray has written fifteen books, most of which you will find on amazon and amazon UK. Many of his novels of fiction were inspired from actual crimes. His first book, “The Cracked Mirror – Reflections Of An Appalachian Son,” is a fictional memoir which has much factual and historical accuracy about the author’s own life.

Currently, Billy Ray spends his time on the Cumberland Plateau in Middle Tennessee with his lovely wife, Julie Anne, and their feisty but lovable Bengal cat named George.

Time to hand over to Billy Ray and discover more about something he lost, music and bearskin rugs,

Welcome Billy Ray and can you tell us what is the most valuable thing you have lost and did you ever find it?

One of my most productive periods as an author was during residence in historic Southeast Arizona – historic because the residence was close to Tombstone (‘The Town Too Tough to Die’), home for a while to Wyatt Earp, Doc Holliday, the ‘Shoot-out at the OK Corral’, and legendary bad guys and Indians).

My writing at the time focused on ‘The Bailey Crane Mysteries’ which was to be a 7-book series. The first book – “An Arizona Tragedy’ – was finished. The second book – “Stranger Abduction” – was finished except for final editing. Both manuscripts were placed in individual boxes. These books were written on my ‘Star-Writer’ word processor…did not have a laptop at the time.

During a subsequent move, the “Stranger Abduction” manuscript was lost…the only manuscript missing of the many already written and in their boxes.

I searched for weeks trying to find it as I had started the publishing process (too many-too fast, I must add). While each book in the series stood alone, each still followed the aging and woes of the central character, ‘Bailey Crane’. Angry, dumbfounded, I finally re-wrote “Stranger Abduction” as a stand-alone book. It’s my belief it is much better than the original that was lost.

What is your favourite music genre and why?

I’m an incurable ‘Romantic’ so I’m a ballad-type of guy. Back in my ‘lotus-eater’ days, there was nothing more soothing, more overwhelming for the emotional-me than ‘Ole Blue Eyes’ Frank Sinatra, Dean Martin, Tony Bennett entertaining me and my lady…with, of course, some wine, cheese, and grapes on a bearskin rug!

Those were the moments when dying, taxes, and tomorrow were never considered and nowhere on the immediate horizon. Fellow ‘lotus-eaters’ will know of what I write here. Somehow, without the music, those moments would not be the same. So much of me is still there in those moments.

Sally here.… I hope that this will provide another bearskin and wine moment Billy Ray….

Do you prefer the beach or the mountains and why?

The beach… If I’m a ‘Romantic’, you know it’s got to be the beach! I’ve got to be able to see the horizon and wonder just what’s beyond. That’s not all! There’s the sun, the waves caressing the shore, the smell of salt water, and those yummy yellow polka-dot bikinis incessantly walking by – with one hopefully lying next to me on the beach towel. Now, this should not be surprising to anyone… I’m seriously impaired, incurable beyond redemption, and my epithet should read: ‘Here lies Billy Ray – The Spirit of his Day!’ I’m just saying… PLUS, there are tons of space in front of me!

Do you prefer cats, dogs, or neither?

I love both cats and dogs. ‘Lady Gray’ is our recently added fur-buddy… Interesting story: ‘Lady’ was an outdoor cat, kept showing up at our backdoor morning, noon and evening for ‘handouts’…which Julie Anne was eager to accommodate. On some occasions, ‘Lady’ would come in, but, then dash out, not quite sure of the situation. Finally, she came in for keeps, pregnant and in need of Vet treatment. She is now at home, wants nothing from outside, not even her siblings. She sits on the back of a stuffed chair and watches her friends romp outside. 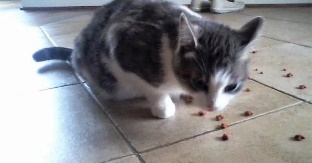 And one very lucky ‘Lady Gray’

If you could choose a different career, what would it be and why?

I would be a golfer – and a writer’! They blend nicely. Hey, I’m out in the sun, at least, most of the time…and, I don’t even mind playing in the rain. There is one proviso: my game would have to be in the professional range of competition. I’m way too much of a ‘Ham’ and maybe I get rich swiftly and have all the pretty ladies ‘following’ my action. On the side, you understand, I’m writing my ‘Best Sellers’! What a perfect fit!

Sally here... you wanted birds following you around the course Billy Ray.. here are a few for you, plus an alligator, turtle and squirrel. Hazards when you play in the big leagues. Courtesy of PGA Tour Channel where you will find more of the same and all the action of the tour.

Here is a small selection of Billy Ray’s books

It is a sunny Sunday in May, 1993. After church, a mother and her lovely fourteen-year old daughter walk three miles to a country store for cigarettes and ice cream. It is a walk members of the family often take in this rural Sulphur Springs Valley area of southeastern Arizona near the Mexican border.

They never make it home…

The deputy sheriff of the county believe there has been a ‘stranger abduction’.

There are lots of action, interesting characters, and romance to go with this fictional account of an incident inspired by true events…events that brought tragedy to a shaken family.

Can you imagine anything more frightening than a mother and daughter disappearing from a quiet rural road? That’s exactly the tale that Billy Ray Chitwood relates in Stranger Abduction. This is a fictitious account of an actual event. A mother and daughter walking home from the store, happy and eating ice cream when evil pounces. The way the author wove this tale around all the characters involved is gripping. I discovered many sub-plots in this book and sometimes that doesn’t work. But, in this book, it worked perfectly and I had no trouble following along. This is a chilling, well-written story that will keep you on the edge of your seat, break your heart and then mend it slowly but surely. A great read!

Read the reviews and discover and buy the books: https://www.amazon.com/Billy-Ray-Chitwood/e/B00502520Q

If you would like to participate in the Getting to Know You series… here is how, with the questions to select your five from: https://smorgasbordinvitation.wordpress.com/2018/04/22/the-new-series-of-the-smorgasbord-sunday-interview-geting-to-know-you-and-i-will-go-first/