I have lived with a severe overgrowth of Candida – I was only in my early 40’s but I felt so old – no system in my body seemed to be functioning efficiently, and it kept getting worse, however much sugar I put into my mouth for energy!!! 22 years ago, doctors who unfortunately were not all savvy about nutrition were not helpful. I was at my wits end until I managed to join the dots and researched Candida for myself.

As I mentioned in my last post it used to be the practice to come off all yeast and sugars, natural or otherwise and for six weeks or so follow a very rigid diet. I do think that it is a good idea to reduce the levels of your yeast in the diet simply because it comes in combination in so many processed foods with sugar, who as regular readers know, I consider to be the real cause behind so much of our ill health today.

Things have moved on – the fact is that most natural produce is absolutely fine to eat. This includes mushrooms which as a fungus are usually one of the first foods to be banned on a Candida Diet.

In the last 18 years I have experimented with natural ingredients in and out of my diet and I have found no reaction to mushrooms or any other natural food on my Candida levels. I have however, reacted quickly to drinking too much alcohol, eating cakes, sweets, biscuits, fizzy drinks, processed sauces, ketchup, soy sauce, milk chocolate with low cocoa content, processed cheap fruit juices etc. In the case of alcohol it is possibly the combination of yeast and sugar (or too many glasses) – and if you look at the ingredients of a great many processed foods it is the sugar content that is likely to be the main culprit.

I have some key indicators for a rise in levels of Candida overgrowth in my system. The inside of my ears begins to itch irritatingly and my eyes start watering. If I continue to consume sugars in excess I can develop thrush symptoms. 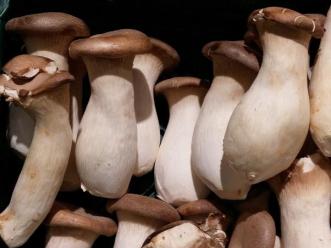 Mushrooms might be a fungus but they are also immune boosting foods and some are actively anti-candida. Mushrooms are on my Food Pharmacy list and I eat at least two or three times a week. Especially on a non-meat day as they have an impressive list of nutrients that make them a great alternative.

According to the ancient Egyptians, over 4,000 years ago, eating mushrooms granted you immortality. The pharaohs even went as far as to ban commoners from eating these delicious fungi but it was probably more to guarantee that they received an ample supply. Mushrooms have played a large role in the diet of many cultures and there is evidence that 3,000 years ago certain varieties of mushrooms were used in Chinese medicine and they still play a huge role in Chinese cuisine today.

There are an estimated 20,000 varieties of mushrooms growing around the modern world, with around 2,000 being edible. Of these, over 250 types of mushroom have been recognised as being medically active or therapeutic.

More and more research is indicating that certain varieties, such as Shitake and Maitake, have the overwhelming potential to cure cancer and AIDS and in Japan some of the extracts from mushrooms are already being used in mainstream medicine.

Apart from their medicinal properties, mushrooms are first and foremost an excellent food source. They are low in calories, high in B vitamins, Vitamin C, calcium, iron, phosphorus, potassium and zinc – and supply us with protein and fibre. They are versatile and they are easy to cook and blend with other ingredients on a daily basis. For vegetarians they provide not only protein but also the daily recommended amount of B12 a vitamin often lacking in a non-meat diet.

Mushrooms of all varieties will boost your immune system in the fight against Candida and are more beneficial in your diet than out of it.

Aged cheese is usually banned from a yeast free and sugar free diet but I have found no major problems when using as part of a balanced diet. It is unlikely that by the time the cheese has digested and reached the gut that it is in a form that is utilised by the fungus. Cheese on toast or cauliflower cheese once or twice a week should not cause you a problem and provides variety and nutrients to feed your body.

I do caution you however if you have a weight problem and are trying to lose weight.. A little cheese from time to time is okay but how many of us actually have that kind of restraint?  Also if you suffer from gallbladder disease you will have to monitor your fat intake carefully and you will find that cutting right back on cheese to a very occasional use to be the best option.

So, now you have bread still in your diet (yeast and sugar free such as Irish Soda Bread) and also mushrooms and cheese.

Thank you for dropping in and if you have any questions fire away.. If you would like to as a private question then my email is sally.cronin@moyhill.com. I am only too pleased to help in any way I can. thanks Sally