Over the last two weeks there has been a recall of over 50 products containing frozen sweetcorn, due to fears that it has been contaminated with listeria. Although listeria is killed when food is cooked at the right temperature, the fear is that many people will use frozen sweetcorn, thawed in salads but not reheated.

Listeria outbreak forces supermarkets including Tesco, Sainsbury’s and Aldi to recall MORE frozen products due to fears they may be contaminated – taking the list to 50

If you go to the article you will find the full list of the 50 products recalled in the UK: Daily Mail – Recall list for frozen sweetcorn products.

It is known that the sweetcorn originated in Hungary and that some of the contaminated batches were packaged in Poland. It was produced by a Belgian firm called Greenyard, which says it is Europe’s second biggest seller of frozen vegetables and fruit, at a plant in Baja. The company has factories across Europe, including two in Britain.

The Hungarian authorities shut down the Baja plant on June 29 and issued a recall of frozen vegetable products produced between August 2016 and June 2018. However, The European Food Safety Authority, which has been investigating the outbreak, said this does not mean that the threat is eliminated.

It warned: ‘New cases could still emerge due to the long incubation period of listeriosis of up to 70 days; the long shelf-life of frozen corn products; and the consumption of corn bought before the recalls.’

Greenyard said the recall ‘involved include frozen corn, peas, beans, spinach and sorrel. The recall initiative of these products does not imply that they are contaminated.

Here is my post from last year – Food Safety – Listeria – An invisible and unwanted visitor.

We often hear horror stories of insects or small animals found in food that we buy – let me tell you the worst thing is to find only half an insect or small animal after you have eaten the rest of the food!!

There is no doubt with careful hygiene and thorough cooking methods in the home the risks are minimised, but more and more we are becoming social animals who eat out in restaurants, or who compromise, and buy ready prepared meals in our local supermarket.

I cannot say in all honesty, that everything that I put into my mouth, is prepared by me alone from fresh, guaranteed organic sources. With the best intentions in the world it is impossible not to have food in your house that has not passed through several human hands before reaching our table.

Although food handling regulations are much tougher, I am afraid the reality is that many of those hands will have been unwashed!

The best that we can do is prepare from scratch when possible, and ensure that we cook all food to the correct temperatures, that are sufficient to kill the majority of bacteria and viruses. 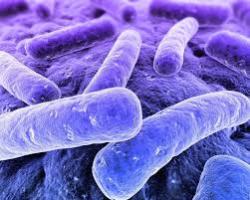 In this post I am going to focus on Listeria, which is a genus of rod-shaped bacteria found in animal and human faeces, on vegetation and in some soil and water. It is a parasite that thrives in warm and cold-blooded animals, including of course humans.

A member of the Listeria family is called monocytogenes and can cause the illness listeriosis. It is unfortunately very resistant to a number of first line defences, such as freezing, drying and to some extent heating. It can grow in temperatures ranging from just above freezing to 113 degrees Fahrenheit, including the temperature range we use for refrigeration.

The most common source of infection is ready to eat meat foods, including hot dogs, cut meats, dry sausage and pre-cooked poultry. Although the preparation of dairy products such as soft cheese includes pasteurisation, the food can become contaminated after cooking. It can also apply to vegetables that have been processed such as pre-prepared salads on the shelves of supermarkets.

Who is at most risk of infection?

As is usual in these cases the very young and very old are the most vulnerable. However with listeria, pregnant women are definitely at risk, which is why it is usual to recommend they do not eat products such as soft cheese during their pregnancy. They are at risk of miscarriage or premature labour, and the infection of the new-born baby.

Anyone who is already ill, and has a weakened immune system, will be susceptible especially those undergoing cancer treatments. Certain medications can leave you open to infection such as cortisone.

Most healthy children and adults are resistant to Listeria, and most people who are infected will recover within a few weeks. There have been cases however that have developed into life threatening conditions such as blood poisoning, meningitis or encephalitis.

What are the symptoms of a listeria infection?

One of the problems connected with detecting the presence of the virus is the length of time between contamination and the first symptoms appearing at usually around three weeks. It is further complicated by the varied nature of the symptoms, but the most common ones are similar to the flu with a fever and muscle aches. There will likely be a gastric upset and in most cases stiff neck, headache and confusion.

Most of us with a robust immune system will recover without intervention but those who are vulnerable, such as babies and toddlers, the elderly and pregnant mums, are at greater risk.

The danger in the case of a pregnant woman is that she might only experience mild flu like symptoms and be unaware of the danger to her unborn child.

How do we prevent infection?

It is impossible to eradicate Listeria completely but you can take precautions that will limit your exposure.

On the subject of pasteurised milk vs. raw milk

The governmental guidelines are that you should not drink milk that has not been pasteurised. Even if you live on a farm, milk straight from the cow could have been contaminated by the animal’s faeces. There is a trend in recent years to drink raw milk and there is some nutritional sense to the argument and Ireland has recently made it legal to buy raw milk from farmers and recognised outlets. Here are some of the reasons that the campaigners state are important to be taken into consideration.. I have also included a link for you to head over and check it out.

A recently published study of over 8,300 children in rural parts of continental Europe found a significant reduction in asthma development of 41% for raw milk drinkers. They were also half as likely to develop hay fever as those who drank shop bought or boiled milk. This research has linked the benefits to whey proteins in the milk which are destroyed in the process of pasteurisation (1).

The first raw milk conference was recently held in Prague. Some of the study results included significant reductions in asthma, atopy and allergies in children who drink raw milk. In most of these studies the children drinking raw milk lived on a farm. The children in the control groups usually lived in rural areas but drank shop bought, pasteurised milk (2).

A small study has shown children who are allergic to shop bought milk and react immediately to its consumption are able to tolerate raw milk without experiencing any adverse affects (2).

You may not have heard of glutathione but it is a potent anti-oxidant manufactured in our bodies which keeps vitamins C and E (also anti-oxidants) in their reduced, active forms. Anti-oxidants are essential to keeping free radicals and other toxins under control and one of the most foundational of these is glutathione. Raw milk is one of the best sources of the amino acids needed to manufacture glutathione; unfortunately these are denatured in the pasteurisation process thus preventing the body from manufacturing it (3).

You can find more information on raw milk: http://rawmilkireland.com/nutrition/

More ways to safeguard yourself against listeria.

How do you treat listeriosis?

If you develop a stomach upset with flu like symptoms and a stiff neck it is likely that you have listeriosis although a blood test would be needed to confirm that diagnosis. Go to your doctor and if he determines that is the problem you will be treated with antibiotics.

If you live in the UK or Republic of Ireland where there are Tesco and Aldi stores selling their own brand sweetcorn, please check your freezer for any of the suspect packets. Most appear to be home brand cheaper products that most supermarkets offer. The vast majority are sourced from safe and regulated suppliers but if they contain sweetcorn you should take precautions.

The stores have removed already from their freezers so going forward there should be no further problem.