Over the next few weeks I will be covering the last two major systems in the body that have a huge influence on our health from the moment we are born until we die. Our reproductive systems generally conform to a set pattern of development, however there are times when nature has its own agenda, resulting in changes that we are now embracing more fully.  I am going to begin with the female reproductive system, how it works and links to posts that I have written on related diseases such as breast cancer.

This post is not just for women but also their partners. Understanding how your own body works is important.. but it is also important for the men in our lives to understand how our bodies work too. Very often in a relationship it is our partner who notices changes to our bodies or our behaviour that can indicate a health problem.

What is under the skin. 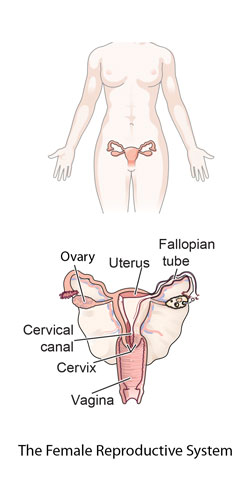 We usually spot when something is out of place externally or when there are lumps and bumps that look dodgy. The problem is that most of us do not know when something is wrong with organs or systems that run automatically beneath our skin, until a problem occurs.   Women are well aware of monthly changes in our bodies which is a good indicator that there might be something wrong or that we might be pregnant. But what about when we stop having our periods and the physical indications are no longer there.

In my own articles in the next few weeks, I am going to take a basic look at the reproductive system and then other areas of health that tend to be more female specific.

Whilst it is not my intention to lecture on anatomy, it is very useful if you have some idea of how a system is put together and the main organs involved.

As part of my nutritional career I have worked with individuals and couples who were intending to have a baby or who were experiencing fertility problems. Part of that process was to understand what makes a woman unique physically.

The reproductive system and where it begins at conception.

In humans it takes male and female sex cells to make a baby. These sex cells are called gametes and the male is sperm and the female is the egg or ovum. These sex cells usually meet in the female reproductive system – although in this day and age they could also meet in a petri-dish in a fertility clinic.

Humans pass on certain characteristics of themselves onto the next generation such as hair or eye colour and in some unfortunate cases inherited diseases. Genes are the special carriers of these characteristics and a child can inherit from both its mother and father and also the ancestors of its parents going back many generations.

The aim of the female reproductive system is to produce healthy eggs (ova), to facilitate sexual intercourse so that the egg can be fertilised (then called a zygote) and protect and nourish the resulting embryo and foetus until it is fully developed and then give birth.

The female reproductive system is housed within the pelvis. Externally, the vulva (cover) is located between the legs and protects the entrance to the vagina and the other reproductive organs inside the pelvis.

There is a fleshy area just above the vagina called the mons pubis and two pairs of skin flaps called the labia (lips) surround the vaginal opening and contain the clitoris. Also, between the labia are the openings for the urethra (carrying urine from the bladder) and the vagina.

Internally, the vagina, uterus (womb), fallopian tubes and ovaries are protected by the pelvic girdle and are responsible for the production and fertilisation of the egg and the protection of the foetus as it develops to full term.

The vagina is a tube approximately 8 to 12 centimetres long in an adult woman. It has muscular walls and can expand and contract as needed. Normally it is contracted but when expanded it can accommodate the head and body of a baby during the final stages of labour.

As with any of the body’s airways and passages the vagina has a lubricating mucus membrane as a lining. This protects it from bacterial infection and also keeps it moist and prepared for sexual activity. The vagina has three major roles; as an entrance and stimulator for the penis, to provide a safe birth canal and also a path for menstrual blood expelled from the uterus each month.

The opening to the vagina is partially covered with a thin sheet of tissue called the hymen, which has probably caused more problems for women than any other part of the reproductive system. Virginity or the lack of was judged on whether this tissue was intact on a girl’s wedding night and in royal circles it was essential that courtiers be present to testify to a blooded sheet as evidence of the bride’s virtue. In some cultures it is still considered critical that this evidence is produced despite the fact that in many cases the hymen has already been ruptured at some point in a girl’s normal activities or that the hymen has not been stretched or torn sufficiently to bleed. This resulted in some sleight of hand by bride’s and their female relatives who resorted to spotting sheets with chicken blood to avoid recriminations. Hence the voyeuristic behaviour by senior courtiers or family members in time gone past on the first night of the honeymoon.

The vagina joins to the womb at the thickly walled cervix (neck) which is extremely narrow outside of pregnancy but can expand sufficiently to allow the baby’s head to pass through it on its way out of the womb.

Despite the fact that the womb is only about 7 centimetres long and 5 centimetres wide it contains some of the strongest muscles in the body. It can expand to hold sextuplets and contract sufficiently to send a baby out and into the birth canal during labour. This pear shaped organ is also vulnerable to infections; cancers and benign tumours called fibroids which are one of the leading causes of its removal (hysterectomy).

In the second stage of the menstrual cycle the womb recognises that the hormone levels indicate that there has been no fertilisation of the egg that has passed through the fallopian tube within the last two weeks. Blood and tissues from the inner lining of the womb detach and leave the body via the vagina. Usually this lasts three to five days and in the first few months after puberty it is likely to be irregular. As with the other areas within the reproductive system women can experience problems with this process. Many women suffer from irregular, heavy and painful periods throughout their teens and often up to their first pregnancy when in many cases the menstrual cycle can settle down. Some women suffer from menstrual problems right up to their menopause and there is usually a hormonal or dietary imbalance involved that requires correcting.

At the upper corners of the womb are the fallopian tubes, which are the connection to the ovaries. The fallopian tubes are around 10 centimetres in length and look a little like a long piece of spaghetti with a narrow opening the size of a needle. At the ovary end, fronds wrap around the egg sacs waiting to catch eggs as they are released.

Tiny hairs then propel the egg back down the fallopian tube to the womb. Fallopian tubes can be damaged by infections or can become distorted preventing the passage of the eggs through the tube or allowing sperm to enter and fertilise them.

The ovaries are two oval shaped organs situated either side of the womb. They produce, store and then release eggs into the fallopian tubes in a process called ovulation, which takes place once a month halfway through a woman’s reproductive cycle.

When a baby girl is born she has already got 400,000 eggs in her ovaries that will remain inactive until she reaches puberty. This is the time that hormones kick in for both boys and girls and the reproductive cycle is begun.

The eggs develop and mature inside follicles which are tiny fluid filled sacs in each ovary and midway through each cycle one egg is released into the fallopian tubes.

The pituitary gland located in the central part of the brain, releases hormones that in turn stimulate the ovaries to produce the female sex hormones including oestrogen. Breasts will develop and towards the end of this first stage of puberty the ovaries begin to release eggs monthly as part of the menstrual cycle.

There are a number of problems associated with the ovaries including ovarian cysts and more rarely ovarian cancer. There is also a hormonal condition called polycystic ovary syndrome (pcos) which is the result of too many male hormones being produced by the ovaries. This results in cysts forming on enlarged ovaries and usually becomes apparent in a girl’s teenage years.

Next time a look at the Endocrine system and the hormones that drive our reproductive system.  When they say it is all in the mind.. it is!

Thank you for reading the post and your feedback is always welcome. Thanks Sally