Although Lateef’s main instruments were the tenor saxophone and flute, he also played oboe and bassoon, both rare in jazz, and also used a number of non-western instruments such as the bamboo flute, shanai, shofar, xun, arghul and koto. He is known for having been an innovator in the blending of jazz with “Eastern” music. Peter Keepnews, in his New York Times obituary of Lateef, wrote that the musician “played world music before world music had a name“. 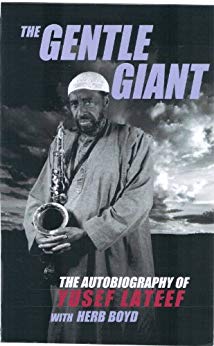 Lateef wrote and published a number of books including two novellas entitled A Night in the Garden of Love and Another Avenue, the short story collections Spheres and Rain Shapes, also his autobiography, The Gentle Giant, written in collaboration with Herb Boyd. Along with his record label YAL Records, Lateef owned Fana Music, a music publishing company. Lateef published his own work through Fana, which includes Yusef Lateef’s Flute Book of the Blues and many of his own orchestral compositions.

Let’s enjoy some of his music…….

“Blues for the Orient”, recorded in 1961, is from the album “Eastern Sounds” which explores incorporating Middle Eastern music in fusion, and hardbop.* Check out Lateef’s amazing interpretation of « Blues for the Orient » on the oboe. This laid-back album is filled with tonal and polytonal improvisation highlighting Lateef’s commitment to world musical fusion. Lateef, as usual, plays more than one instrument in this production, he introduces the Chinese xun* (globular flute) in the opening track. This album showcases Lateef’s original compositions as well as love themes from the films ‘Spartacus’ and ‘The Robe.’ Lateef is joined on this recording by Barry Harris on piano, Lex Humphries on drums, and bassist Ernie Farrow.

*Hardbop – a subgenre of jazz that is an extension of bebop (or ‘bop’) music.

*Xun – a globular, vessel flute from China. It is one of the oldest musical instruments in China and has been in use for approximately seven thousand years

The innovative “The Centaur and the Phoenix”, recorded in 1960 on the Riverside label, takes you in many directions – soulful blues, lush ballads, and many Eastern influences, highlighting Lateef’s outstanding flute work. It illustrates Yusef’s interest in expanding the orchestration of jazz. Yusef made a point of not calling his music jazz, rather “autophysiopsychic”, meaning music coming from one’s physical, mental, and spiritual self. The instrumentation he used in this recording was quite unusual at the time: this nonet* included bassoon, oboe, and two trumpets. What makes this album stand out is the balance Lateef achieves with this large group, always an asset, never a distraction, allowing his flute, oboe, tenor sax, or arghul* to rise above it all in brightness, grace and joy. He is accompanied by Ben Tucker on bass, Josea Taylor on bassoon, Lex Humphries on drums, the young Joe Zawinul on piano, Tate Houston on baritone sax, Curtis Fuller on trombone, with Clark Terry and Richard Williams on trumpet.

*Nonet – A musical composition for nine voices or instruments.

*Arghul – a musical instrument which has been used since Ancient Egyptian times and is still a traditional instrument in Egypt and Palestine. lt is a double-pipe, single-reed woodwind instrument that consists of two tubes: a melody pipe with between five and seven holes and a longer drone pipe. Its tone is similar to that of a clarinet, although a bit more reed-like.

“K.C.Shuffle” is the opening song from the album “Part of the Search”, recorded in 1974 at Atlantic Records, an album that breaks the traditional mode of recording commercial albums in that it consists of 11 songs with seven interlude tracks ranging in length from 1 to 23 seconds. Because of the album’s musical diversity it offers sort of a history of jazz in styles and expressions including Kansas City jazz, R&B, and doo wop. Lateef doubles on tenor and alto and is accompanied not only by his trio but by a big band, a string quartet, background vocals and a variety of electric keyboards and guitarists. Aside from doubling on tenor and alto sax, Lateef also plays the flute, bamboo flute, pneumatic bamboo flute, oboe, bells, and tambourine.

“Yusef Lateef’s Little Symphony” – in four movements (produced by Lateef, recorded, mixed and mastered by Norman Blain, and remastered by Dennis King) is imaginative, moving, and provocative. This is not surprising from a musician who dedicated his career to change and musical freedom coming from jazz’s rich history of improvisation and spontaneity. Billboard described this album as ‘an atmospheric four-movement classical/jazz composition.’ “Yusef Lateef’s Little Symphony” received a Grammy Award in 1988 for Best New Age Album despite the fact that Lateef had no prior association with the genre. Lateef played all of the instruments that appear on this album (reeds, flutes, shannie, gourdophone, kalangu, water drum, and percussive sitar), overdubbing each track himself.

As always we would love to receive your feedback.. thanks Sally and William