Time for the second post from fantasy author Charles E. Yallowitz who has a wonderful blog where you can find stories, thoughts on life, book related posts and poetry. I will be sharing more on those subjects in the next two weeks. I selected this post which is from February this year, because like Charles I find that the emphasis on what is considered normal to be concerning.

We are urged to embrace our uniqueness on one hand and then taken to task if we don’t conform to a standard that has not been set by the people who know us, but by the media, fashion industry, entertainment industry and our own governments. As someone who was morbidly obese for ten years, I certainly did not conform to what was considered normal. I am sure that you will find this post as thought-provoking as I did.

What’s Wrong With Being Odd? by Charles E. Yallowitz 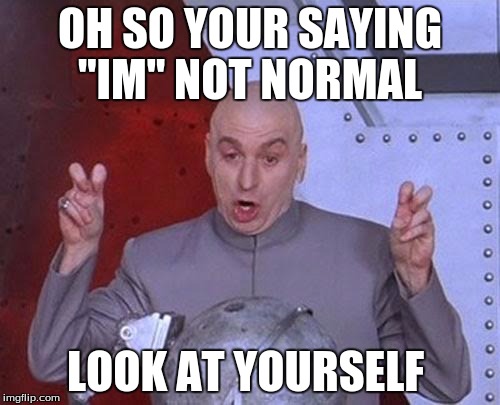 Lately, I’ve been thinking a lot about how people and society tend to declare what is normal. Part of this has probably stemmed from my son being special needs and seeing how the world responds to him. We seem to take ‘normal’ for granted even though I can’t even truly define it for this post. You hear people point out oddities more than normalcy, which makes it feel like being odd is the only way to be an individual. Yet, we’ve also stigmatized many differences including those that require special attention or medical help. Overall, I have the opinion that most humans cannot exist without seeing something ‘beneath’ them. That flawed person to make you feel superior because then you’d be the one at the bottom. It’s fairly sickening.

Yeah, this is a pretty heavy post for a Sunday, which is usually light here. I just couldn’t get this topic out of my mind. Especially considering many of my ‘abnormalities’ that people have picked on:

Many of those are physical issues and I don’t even have control over some of them. Others are choices, but they are things that make me happy. So, the judging of society covers things that are both beyond our control or within our control. Isn’t it strange to genuinely bash someone for getting happiness out of something that isn’t hurting anyone? Yet, we see it happen all the time because it might not be a ‘normal’ interest. My list is actually pretty mild compared to others who are marked as ‘abnormal’ simply because of who they are. Why do we have to define a normal anyway? Is it really that important to have this label that is used more to ostracize than include? Been thinking about this for a long time and I can’t figure it out. In fact, it tends to make me tired and want to spend more time in Windemere.

I will say that one thing I enjoy at my job is seeing how the students interact. Every week, I see or hear at least one encounter where someone who would be an outcast during my school days be included in something. Not because a teacher told them to, but because they wanted that person there. Gives me some hope for the future.

Anyway, what does everyone else think about this topic? I know it’s rather touchy and I’m not asking anyone to declare their oddness. Just let me know what you think about normal and abnormal. Maybe you can figure out and explain this to me, especially since everyone has has one thing that makes them ‘odd’. I mean, how can you have normalcy without people being identical? It just doesn’t really make sense to me.

I am sure that has given you something to think about and thanks to Charles for allowing me access to his very extensive archives.

A selection of the most recent books by Charles Yallowitz

A recent review for War of Nytefall: Book Three – Rivalry

I am not someone who typically loves books that are centred around vampires. I have never had much of a fascination with them, (perhaps this comes from Romanian roots and the eye-rolls that go along with those roots,) however, I feel like the author has created a new and interesting breed of vampire in his Dawn Fangs. They extend the normal parameters that one expects with vampires and I like that they are not all simply humans, but other species as well. They have a range of personalities, which, is nice to see.

This book is not light on action and there is always something happening to capture the reader’s attention. It is a bit gorier than some of the other works set in Windemere, but one should probably expect that when the book is about vampires. I like the various settings in the book and the author does a good job of visual imagery and transporting the reader to a new location each time the characters move on to a different place. There has been quite a lot of character development and some fantastic new arrivals since the first book in the series.

All of that being said, I do have some fundamental issues with this book, as with the other books by this author. I want his characters to take themselves more seriously. I can appreciate a moment of levity here and there when it is called for, but sometimes, I feel like you never get to feel the pain these characters truly feel, because there is usually comedy of one variety or another involved. For me, this takes away from a serious situation and makes it seem superficial, casting the same unfortunate glow on the characters. I want to hurt and feel pain when the characters I have grown to love are feeling it. I want to feel their joy and triumph when they overcome an obstacle or share something special. I don’t always want the two things to be mixed.

It seems to me, that the author is fully capable of producing material that will shock and please an audience and could grow these books into something much bigger than they are. Still, I feel he is holding back. Perhaps is afraid to offend the audience with too much darkness when exploring the depths of his characters? I personally think any author with the talent to write such creative works, should not be afraid to express themselves fully and take ordinary to extraordinary by not worrying so much about what the audience may think.

In any case, there were a lot of good things about this book, and a lot of reasons that you might want to pick it up and give it a read. I, for one, love the tournament style fighting–which is kind of Roman Colosseum with added magic. I enjoyed the suspense of those fights and never knowing what kind of opponent the characters were going to face.

Overall, this is a good book, written by a highly talented author who is good at provoking the reader’s imagination.

Read all the reviews and buy the books: https://www.amazon.com/Charles-E-Yallowitz/e/B00AX1MSQA

About Charles E. Yallowitz
Charles E. Yallowitz was born, raised, and educated in New York. Then he spent a few years in Florida, realized his fear of alligators, and moved back to the Empire Stare. When he isn’t working hard on his epic fantasy stories, Charles can be found cooking or going on whatever adventure his son has planned for the day. ‘Legends of Windemere is his first series, but it certainly won’t be his last.

Links to connect to Charles on websites, blogs and social media.

Thank you for dropping in today and I will be sharing more of Charles’s posts from his archives over the next two Saturdays.

25 thoughts on “Smorgasbord Posts from Your Archives – #PotLuck – What’s Wrong With Being Odd? by Charles E. Yallowitz”