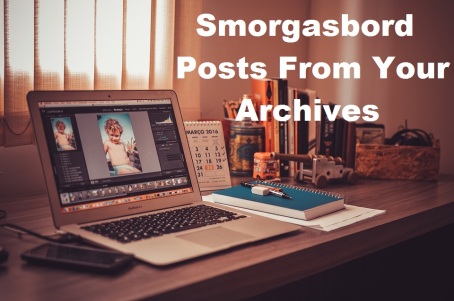 Time for another post  by Paul Andruss who gave us plenty to think about in terms of poetry in part one of According to the Muse yesterday: Part One 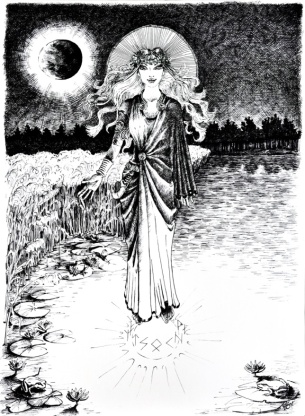 So saith the Muse: Now you see poetry lies in what is written, not how it is written, or even how it looks written, you understand poetry is no mere academic exercise but an irrepressible urge. A writer without passion is naught but a scribbler Pilgrim. Artists have no choice but to strive, for poetry is the soul. And shall I tell you what lies in a poet’s soul?

Pilgrim: No! No you’re ok… That was lovely thanks, but I’ve gotta get…

Muse: It’s a rhetorical question. This is a never-to-be-repeated offer: a lesson from the Muse. You’ll get such a sip from the cauldron of inspiration it will blow your socks off and you’ll never look at a poem in the same way again. And that, my boy, is the first step to becoming a poet.

Pilgrim: Alright then, hit me.

Muse: And don’t think I won’t!

You may believe poetry is all unicorns and rainbows. Wrong. Poetry is fear. Man did not invent poetry Pilgrim. Poetry was birthed in forgotten aeons before man was dragged up from the apes to stand beside the angels. Poetry always existed, unknown and unshaped. Man merely gave it voice, words and reason.

Stripped of language, culture and intellect, poetry is the primal scream of naked panic at descending darkness. Poetry comes from the blind abject terror of believing unless you beseech the gods correctly the sun will not rise tomorrow; the rains will not fall; spring will not come; plants will not grow and the herds will not return.

Predators in Africa make more kills during the new moon. On moonless nights, lion attacks on humans increase threefold. It is not lunacy driving the wolf to howl at the full moon, it is a poetic lament for an empty belly. Does it surprise, man also sings to the goddess Moon and her daughter the hearth fire to keep him safe?

Unlike animals, man knows he is mortal. It drives the two warring forces in his soul. Eros, or lust, is the will to survive no matter what, to seek communion, to create life and art. Thanatos is chaos, death, war, melancholia, and fear.

Man is not simply afraid of death. He dreads when and how it comes. He frets if and how he will be remembered. He believes his only choice is dying ignominious and forgotten, or departing in a blaze of glory.

Beside her the lonely crochet
Lay patiently and unstirred,
But the fingers that would have work’d it
Were dead as the spoken word.

It is not bad. Let them play.
Let the guns bark and the bombing-plane
Speak his prodigious blasphemies.
It is not bad, it is high time,
Stark violence is still the sire of all the world’s values.

Pilgrim: Not though I don’t believe you Muse, but what about humour?

Muse: Scared chimpanzees make the same facial expression as a smile and the same sound as a laugh. Why do strangers passing on a narrow track often say hello or excuse themselves with a smile? What is humour if not something to laugh off fear and threat?
Poetry is never humorous Pilgrim, though rhyme often is. Rhyme is a delight. A game of ambiguity and wit played with devices of semantics and grammar to the point of absurdity.

The common cormorant or shag
Lays eggs inside a paper bag
The reason you will see no doubt
Is to keep the lightning out
But what these unobservant birds
Have failed to notice is that herds
Of wandering bears may come with buns
And steal the bags to hold the crumbs.

According to the Norse Skalds, rhyme is not poetry. Skalds, drunk on poetic mead, considered rhymesters only sipped the drops spilt by Odin as he fled with his stolen prize.

Pilgrim: And what about love? Surely, the greatest poems are love poems.

Muse: Does not the fear of loss, betrayal and rejection haunt love? Ask any mother if she worries over a child. Ask any lover. While some stories end with ‘and they lived happily ever after’, those that don’t, deal with loss.

Cold in the earth—and the deep snow piled above thee,
Far, far, removed, cold in the dreary grave!
Have I forgot, my only Love, to love thee,
Severed at last by Time’s all-severing wave?

Come, walk with me,
There’s only thee
To bless my spirit now –
We used to love on winter nights
To wander through the snow;
Can we not woo back old delights?
The clouds rush dark and wild
They fleck with shade our mountain heights
The same as long ago

All religions offer prayer in song: Christian, Jew, Muslim, Buddhist, Hindu, Taoist, Shinto. Even the angels in heaven sing their praises. Poetry is the source from which all art flows: dance, music, song.

Incantation, meaning to sing and chant, comes from Proto-Indo-European, the ancient mother tongue that gave rise to of Sanskrit, Persian, Slavic, Celtic and the other European languages. The Proto-Indo-European word means to speak with the voice of a god. When the gods speak through prophets and poets, the listeners become intoxicated. It is for this reason the Irish God of eloquence, Ogma Sun Face is shown leading men bound with golden chains running from the mouth of one to the ear of the next.

Because gods speak through poets, poetry is not meant to be easy. Poets are held in high regard because they suffer and sacrifice for art. Odin gave an eye at the well of Mimir for a sip of poetic inspiration. Druidic poets took 25 years to learn poetic lore, including scores of epic poems.

Homeric poets could recite 25,000 lines of epic poetry. Lines burn into minds in the fearful knowledge, one misplaced rhyme would cause everything to be irrevocably lost. A practice continued in Greece and Rome as part of a child’s education; learning by heart Homer’s Iliad and Odyssey. Poetry is meant to be spoken and heard, not read.

Pilgrim: Not read? The world’s oldest written text is a poem. In the Epic of Gilgamesh, written four thousand years ago, Gilgamesh seeks immortality only to learn the gods have made death man’s fate. Writing preserved that poem for us.

Muse: Killing poetry in the process. As soon as poetry is written down, it dies.
When science and logic won the battle for men’s souls, the godless Greeks shrank poetry to an intellectual game. Aristotle claimed to analyse poetry. Broke it down into different parts and drew up rules for its application. I was split into nine muses, one for each liberal art, and reduced to a handmaid of Apollo… me, the goddess Muse!

Apollo, a mouse demon, only conquered my shrine a Delphi once the sacred aether had left in its rocky cleft. My pythoness, a slave of unscrupulous priests, was made to sprout gibberish over piles of smouldering laurel, for them to interpret according to their schemes.

I am no handmaid of gods Pilgrim. I am their mother, bride and undertaker. Before a sterile satellite, I was the White Goddess governing the tides of life and death, of women and water. My new, full and old moon faces lit the night, or consigned men to darkness and dread. I was spinner, weaver and cutter of the thread. The morning star, heralding dawn; the evening star bringing the sun home; the midnight star the heavens revolved around: keeper of the pearl-rimmed cauldron frothing with poetic mead. My name meant illumination of thought and I was worshipped as mind, struggle and offering. Then I became memory, practice and recitation.

Odin, like Hermes, is the god of thieves. His ravens Thought and Memory swept the nine realms gleaning news. Learning I governed the nine worlds with charms written upon the World Tree Yggdrasil, Odin thought to steal my power, the power of the Norns. Knowledge made Grimnir arrogant. He hung on Yggdrasil for nine days without food or drink until his flesh felt rough as bark and when the runes travelled over his skin, he greedily gathered them in.

The Norns (The Nordic Fates):
Andruss adapted from Gehrts’ lithograph

Men entombed me in books, captive within grand libraries at Athens, Ephesus and Alexandria. Mistaking knowledge for wisdom those arrogant fools believed themselves gods. Where are those monuments to conceit now? Consigned to flame; their writings ash.

Only the Druids’ poets refused to write my secrets down. Though versed in Greek and Latin, they lived by my code:

They knew books destroyed poetry and encouraged the unworthy. Had not the sea god Manannan kept the Irish alphabet of trees in a crane skin bag, immune to magic, lest it corrupt men with literacy?

Yet the druids were slaughtered by Caesar; all their wisdom, all their gods, lost, the only survivors Apollo, Odin, Hermes and Thoth. The gods who imprisoned me ensured immortality by hiding inside the written word. Or was it man who made gods subjugate me? For what are gods but inventions of man?

Under gods, man thought me tamed. Then man forgot the gods. But poetry remained. A poet seeking to invoke no longer knows how, he thinks to flatter and seduce and if he succeeds, in blind fumbling excuse, believes I allow because he understands a woman’s needs. As if setting a rose in my hair like I were a Andalusian girl kissed breathless against a Moorish wall under a hot Alhambra moon with him urging my yes, putting hands on me and kissing my neck while I thinking as well him as another draw him down to the perfume of my breasts with his heart drumming like mad in the expectation of my yes. The bloom and the breast is not his to possess or caress until my liberal yes, for this is woman talking and I am sick of love. Yes I am no more his than a snatch of song heard on the jessamine breeze or a flower of the mountain born to die. So let me be yes set me free from the inky bars of this prison page to roll off the tongue careless as a lover’s air whistled on Palma Violet scented breath let loose in an empire of senses where guileless yes is yes, a paradise garden of delight, a sensual world pregnant with life.

(According to the Muse her soliloquy must be read aloud)

Paul Andruss is a writer whose primary focus is to take a subject, research every element thoroughly and then bring the pieces back together in a unique and thought provoking way. His desire to understand the origins of man, history, religion, politics and the minds of legends who rocked the world is inspiring. He does not hesitate to question, refute or make you rethink your own belief system and his work is always interesting and entertaining. Whilst is reluctant to talk about his own achievements he offers a warm and generous support and friendship to those he comes into contact with.

Paul is the author of two books and you can find out more by clicking the image.

Connect to Paul on social media.

You can find all of Paul’s previous posts and gardening column in this directory: https://smorgasbordinvitation.wordpress.com/paul-andruss-myths-legends-fantasy-and-gardening/

Thank you for dropping in today and as always please leave your questions and comments for Paul… thanks Sally.