Welcome to the new series of the Sunday Interview..Human in every sense of the word.

As humans there are five main senses that we rely on to navigate through this world.  And there is one that we all possess but do not necessarily use all the time…

For some people however, one or more of those senses do not function and we can only imagine the challenges this results in.

I don’t know about you, but I take my senses for granted, expecting to see my surroundings when I wake up each morning, hear the birds sing, feel the bedclothes as I throw them back, and the carpet beneath my feet. I expect to taste the marmalade on my toast, and smell the coffee I am about to drink. I also rely on my sixth sense, the one that people cannot really define, that somehow keeps me from making an error of judgement.

Scientists believe that we have other senses that are also important but that we have lost touch with over our evolution. But for this interview series I would like to focus on the six senses I have mentioned.

I would like you to write from 300 to 600 words about one or more of these senses.

We often associate significant events with our senses… the first time we heard a certain piece of music, touched an object or someone that had a profound effect on us, the first sight of a newborn baby or an event unfolding before our eyes, smelling a flower or eating a new food for the first time that was amazing.

You can choose to write about one sense or all of them, including that elusive sixth sense we have clung on to from the early days of man.

Please use the 300 to 600 words and if you need more that is fine, use what you need to engage us and our senses.

Meeting a ball of fluff and falling in love.

I had to give up my Lassie collie Sabre when my marriage broke up in 1977, and I was devastated at the time. Part of me desperately wanted another dog, and part of me was scared to lay myself open to more heartbreak, even when I remarried in 1980. I was able to use career and living abroad as an excuse for eighteen years, until we moved back to Ireland the first time in 1997. We ended up buying a house on two acres, part landscaped gardens with half an acre as a wild meadow. Perfect for a dog.

We decided it was time. For years we had joked about when we would get a ‘Sam’… the name I had already chosen, and I knew that I wanted another Lassie Collie.. They were hard to come by, but luckily my father-in-law lived opposite a renowned dog show judge, who gave me the number of a reputable breeder. I rang and they told me that a litter had been born, sired by their own champion, literally 10 kilometres from our new house. The pups were three weeks old and the breeder gave me the number to arrange a visit.

David was working in Dublin every day, but I rang and arranged an appointment for as soon as possible. When I arrived I discovered that the owner was not there, but his wife took me through to see the mother and the three pups, two girls and a boy. They were just fur balls at the time.. and only just brave enough to explore the back yard. She handed me the boy and I looked into two button eyes that shone with mischief… I tucked this milky scented ball of fluff under my chin and felt a small tongue on my neck. A shiver ran through me and I started to cry. I had never felt this instant a connection with anyone or anything before.  Even writing this today, I still feel his soft fur and remember his scent over twenty years later.

I was so embarrassed, but the owner’s wife understood and just left us alone for a few minutes. When she came back to see how we were getting on, I had no hesitation in telling her that I wanted him. I knew that there was no way that this pup was not going to be a part of our lives. I paid for him there and then, and reluctantly left, promising to come back in three weeks with David to meet him.  I told her that he was going to be called Sam, and she said that they would use that from now on when handling him.

We went back when he was six weeks old, and I called him when we came out of the kitchen. He immediately raced over and begged to be picked up…in fact his two sisters came with him, and the owner told me that their two year old daughter had been calling them all Sam!

After I had enjoyed a snuggle and kisses, I handed him to David and he too was captivated. It was tough to leave without him, but we arranged to be back in two weeks to pick him up.

That was the start of the most amazing non-human relationship I have ever had. That dog knew me better than I knew myself. When David went to Madrid a year later, it was just me and Sam except for every six weeks when I went to Spain, and I left him with two amazing carers. For over three years we did everything together, including driving over 2000 kilometres from Ireland to Madrid to join David in our home there.

That began a whole new adventure, and that bond that we made in those first few minutes, was never broken until the day I held him as he went to sleep. 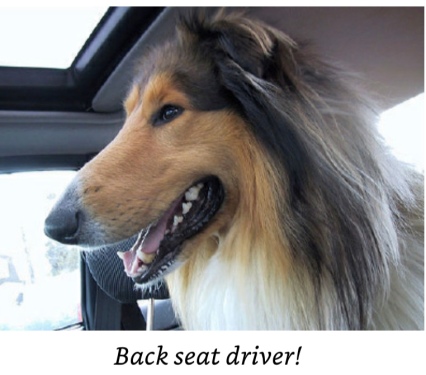 If you have been on the blog before, either as an author in the Cafe and Bookstore or in the Posts from the Archives, I already have your book, blog and social media links.

All I need is a word document of your 300 to 600 word piece with any photos attached to the email sally.cronin@moyill.com

If you are new to the blog, then I will need your Amazon and Blog link, main social media links (in full please) If there is no bio on either Amazon or your blog please provide one, along with a bio photo. And then your 300 – 600 words with any photos attached to the email sally.cronin@moyhill.com

I appreciate that this a slightly different format to my usual Sunday Interview shows, but I hope that you will take on the challenge. It also means that even if you have been interviewed here before you are very welcome…

Look forward to hearing from you …. thanks Sally.