This is the third post from the archives of Tasker Dunham. The blog is a personal memoir about growing up in Yorkshire in the 1950s, 1960s, 1970s and later. It is not always about Yorkshire, nor is it entirely memoir, but most of it is. I have selected this post, because I am sure that if you are around the same vintage (66) you to will have memories of before and after the Internet.

Research Before The Internet by Tasker Dunham as evoked by
A.S. Byatt – Possession: a Romance (5*)

The novel, Possession, evokes for me exactly what it was like to carry out research before the age of the internet, when we had to go to libraries to look things up in books and journals, and even use primary sources. More on this below.

It may also be the cleverest novel I have ever read: in fact I read it twice, partly because I enjoyed it so much and partly because a lot of it went over my head the first time through.

To describe the book first, the plot concerns two nineteen-eighties scholars who discover correspondence between two fictional Victorian poets revealing a previously unknown love affair. It is a discovery of immense historical significance, akin, say, to finding revelatory private correspondence by major literary figures such as Alfred Lord Tennyson or Christina Rossetti. As the two present-day scholars investigate the lives of the poets, they themselves are drawn into a relationship echoing that of the two Victorians. The two stories are revealed in parallel through five hundred pages of narrative, fictional poetry, letters, journals and diaries. So as well as the two love stories, and a cracking mystery story, A. S. Byatt has created substantial bodies of work attributed to the fictional poets and numerous pieces of writing attributed to other characters.

I struggled the first time through because: (i) the Victorian setting is rich in classical, biblical, literary and contemporary references of the kind with which educated Victorians of the time would have been very familiar but most of us today are not; and (ii) the nineteen-eighties setting alludes to numerous arcane and specialist approaches to textual analysis and criticism; e.g. we learn one of the scholars is trained in post-structuralist deconstruction. It found my own education sorely lacking.

Some might say the author is simply showing off, but essentially she is poking fun, and is abundantly able to do so because of her sweeping knowledge of Victorian and modern scholarship, poetry and literature. Some might say this is self-indulgent, but surely that is what all writers are. Her descriptions of beautiful things are dazzling, be they Victorian bathrooms, snowfall, the North York Moors or libraries. The 1990 Booker judges were clearly impressed.

That she put this sumptuous book together before 1990, before the internet, makes the achievement all the more impressive. She has not simply googled a tapestry of ideas and stitched them in, it stems from a lifetime’s study and expertise.

And that is what Possession strongly evokes for me: the pleasure and excitement of academic work before the age of abundant electronic resources and the internet. Anyone whose university days predated the turn of the century, perhaps researching a thesis or dissertation, or a final-year project, will find Possession brings it all back. You feel as if you are researching the Victorian poets yourself.

For me it was the light and quiet in a corner of the  top floor of the Brynmor Jones Library at Hulltop floor of the Brynmor Jones Library at Hull, looking through the raked windows across the city to the distant Humber where bogies high above the river crossed slowly back and forth spinning the Humber Bridge suspension cables. Later it was the darkness and claustrophobia of the open stacks deep in the bowels of the John Rylands Library at Manchester.

The silence; the decades of collected journals; the Dewey Decimal index; the chance discovery of a promising book next to the one you were looking for; deliberately mis-shelving books so that no one else can deny you them the next day (I plead guilty, but I never stole anything, unlike one of the scholars in Possession); pages of handwritten notes from volumes piled six or seven high on your desk; coloured pens and paper clips, sore fingers; treasure-trails through the impenetrable Science and Social Sciences Citation Indexes (the SCI and SSCI); flip-lidded index card boxes; inter-library loans; journal offprint requests; scratchy, smelly, chemical photocopies; microfilm readers; hours following leads and loose ends which led to nowhere; puzzling new words and terminology in need of clarification; flashes of insight on encountering new ideas and making what you hoped, but rarely were, entirely original associations. More than anything else, the Csikszentmihalyian  sense of flow: the buzz of your own thoughts, total immersion in the task at hand, suspended in time so that nothing else seemed to matter.

Through the nineteen-nineties things gradually changed. It became possible to research whole topics instantly and with plausible thoroughness through just a screen in an austere book-free room. Things were never the same again. I was still recommending books for my courses into the new century, but in rapidly changing subject areas such as computing, and even the social sciences, some of the university lecturers I knew stopped using print sources completely.

I hung on to my collection of academic books until retirement when they had to go. I kept a few that no one wanted, and ones that had once been especially useful and dear to me. 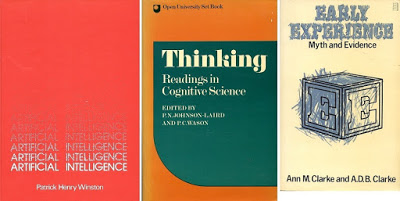 Key to book ratings: 5* would read over and over again, 4* enjoyed it a lot and would recommend, 3* enjoyable/interesting, 2* didn’t enjoy, 1* gave up.

What are your memories of pre-Internet research… and do you still hang on to your old reference books?

I grew up in Yorkshire and worked in Leeds before going to university late, and then lived in various places around the U.K. before moving back to Yorkshire where I now live with my wife and family. I have worked in accountancy, computing and higher education, as well as in temporary jobs in factories. This memoir is based on people, places, things and events I knew, with some names and details altered to avoid difficulties. I tend to post two or three times each month.

Some items recall people and experiences, others try to give things a humorous slant, and some are of the “look how the world has changed” kind.

Thank you for dropping by and I hope you will head over and check out the rest of Tasker’s archives … and as always love to get your feedback.. Sally.