It is now July 1986 and we manage to get a weekend away with our friends before my niece Emma arrives from England for three weeks. We head off to San Antonio and plan to raft down the Guadalupe.. and no doubt drink margaritas. This is my letter home to my parents in the UK after our trip.

We are just about recovering from our weekend away, although some injuries may take a little longer to heal! It was action paced and a lot of fun and accommodations were interesting to say the least.

The condo only had two bedrooms and a sleeper sofa between the 8 of us. Paul and Kyle shared one bed, Debby and Anna another, Walter and Alison, David and I shared the living room with two in the sofa bed and the two of us on cushions on the floor. Debbie and I were up at 7.00 cooking breakfast for everyone which got their attention as bacon aromas drifted through the condo.

We set off for the river at 8.30, laden down with coolers of beer and wine with sandwiches for lunch, plastic bags and elastic bands (reasons later) and two rubber tubes (for the coolers). We arrived at the rafting centre and rented two, one for the four boys and one for us four girls. We attached the rubber tubes to the backs of the rafts and placed the coolers of liquid refreshment inside them to keep everything cool. Once we were under way the plastic bags were filled with river water and sealed until each boat had 20 or so each, and then the war began. We all ended up in the water at one time or another but quickly dried in the sun.

We got to the rapids and rocks where we disembarked whilst the rafting company crew got us prepared for the next section.. We we poised between two rocky sections and were told to get in the boat as quickly as possible and they would push us down the small cascade to the next river section. I was last one in and had one leg in the raft and the other by side of the chute when the guy pushed the raft. But my leg was trapped between two rocks and I was jerked off my feet and back into the water. Luckily the raft was not too far down the chute and they caught it so I could get in. Unfortunately I now have a very painful and bruised shin bone. I had it looked at by a medic at the centre at the end of the ride, and luckily it was not broken but I still have to use a stick. They say should be fine in a few days!  I seem to be accident prone. I am sure that the three beers I had in the first couple of hours had nothing to do with it!

It took six hours in total to navigate the river and a bus took us back to the centre where we had left our cars. A quick change and with me hobbling, we descended on a fantastic Mexican restaurant along the river walk in San Antonio that had a large outside area. The meal was amazing, almost as good as Pappasitos… and we had a great time. It ended up with two mariachi bands having a contest at each end of the table for nearly an hour and they ended up playing “Felice Navidad” as they had run out of things to play. We all sang along and soon all the other customers joined in for several choruses.. I can only assume that passersby thought we were all nuts in the middle of summer.

When we got back we headed down to the river that ran alongside the condo, and it was shallow enough to sit in the cold water for half and hour and it did my leg a lot of good. We then all slept like logs and then headed home in the morning. We were in bed by 10pm and I still needed a siesta yesterday to catch up.

Today I have done a big shop ready for Emma’s arrival, shampooed the carpet and been for a couple of swims to try and ease my leg, which as predicted, is feeling a bit better today.

And we have made plans for our trip home in September.  David is running an exhibition in Manchester from the 10th, so I will come home to see you for the first week and then go up and join him before we go to Prescott together to see what his company has planned for him next year. It will be lovely to be back for your anniversary on the 11th having missed last year and looking forward to seeing everyone at the party.

Better get an early night before the great day tomorrow… so looking forward to seeing Emma, and the gang will all be here on Saturday for a curry lunch to meet her, and we will ring you on Sunday to tell you all about it.

Please find enclosed a photo taken by the pool a few weeks ago… we have some new members to the group….. 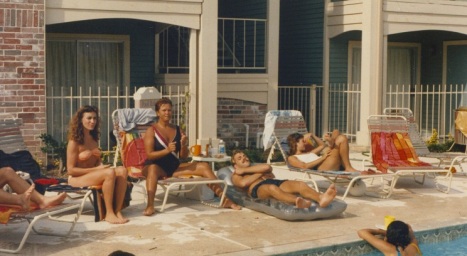 If you would like to read any of the other letters from the two years we lived in Texas and our travels you can find them in this folder: https://smorgasbordinvitation.wordpress.com/letters-from-america-1985-1987/

Thanks for dropping in and your feedback is always welcome.. Sally.