This week on the Carrot Ranch Flash Fiction Challenge by Charli Mills – Charli has asked us to write a story using the Mexican Day of the Dead as a prompt.. anywhere that it takes us.

She had loved her stepfather, and he had always treated her as his own. She understood and respected his wishes when it came to the headstone when her mother died. But now he was gone too, and rather than be buried in this plot, he had chosen to have his ashes scattered in the memorial garden.

She reached out and touched the new headstone that had replaced the original and hoped that her mother and father would now be at peace. 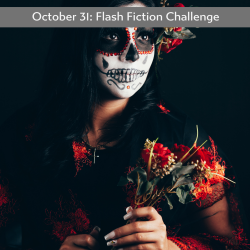 If you would like to participate in this week’s challenge, you have until November 5th. https://carrotranch.com/2019/10/31/october-31-flash-fiction-challenge/