Stories have always played a part in Christmas celebrations and over the next few weeks I would like to share your festive tales… and you can find details of how to participate at the end of the post.

Delighted to share a story by Victoria Zigler today, from the book Ulrike’s Christmas and you can find details of how to buy this book and Victoria’s many other children’s books after her story. 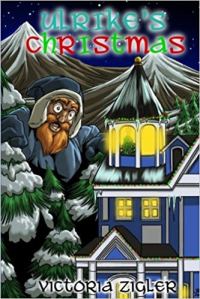 The Tinsel Story by Victoria Zigler

Many years ago, in a tiny but neat little cottage at the edge of a small village, there lived a very poor family. They had so little food that there were times when they went to bed with empty bellies, and the clothes on their backs had seen better days. But they were a kind family, who were always willing to share what little they did have if they felt someone else’s need was greater than their own, and if they had something to share, of course.

Because they were so poor, each member of the family, right down to the very youngest child, had to work hard every single day. Those that were old enough would do what they could each and every day to try and scrape together enough money to pay the bills and put food on the table. But it was never quite enough, and the only reason they even had the luxury of a fire was because the little village where they lived was surrounded by woods, and the youngest children, who were too small to have a trade, would help by gathering sticks and things to burn, and sometimes to sell to people who were too busy – or possibly too lazy – to gather their own firewood.

When Christmas time arrived, the family knew there would be no feast for them to look forward to. Still, the little family felt they couldn’t let it go by uncelebrated, and so all of them set off in to the woods to fetch a tree, which the Father chopped down, and they all helped to carry home. It was exhausting work, especially since there was no food in the house, so they all had empty bellies. But they smiled and laughed together anyway, because they were grateful to just have one another.

Of course, the family had nothing to decorate the tree with. But they set it up in pride of place just the same, and gathered around it to admire it, just as they would have had it been the most beautifully decorated tree in the entire world.

The time it had taken to fetch the tree meant that not only was there no food to be had that night either, but the supply of firewood was so low that they could only make the very smallest of fires, which did very little to keep away the chilly Winter wind. But not one of them complained about the ache in their empty bellies, nor how much the cold made them shiver beneath their too thin blankets. Instead they thought of their beautiful tree, and whenever they did they smiled and forgot everything else… Just for a while.

Now it happened that a spider shared the little house with the family, and this little spider had seen the family’s kindness. In fact, he’d had the opportunity to be grateful for it himself in the past when the Mother had left his web intact instead of destroying it as most people would do. And so, as he watched the little family huddle together to try and keep as warm as they could, he decided he would do something kind for them in return.

That night, the little spider waited until he was sure each and every member of the family was asleep, and then he scurried to the tree, using strands of his web to help him climb to the very tip. Once he was right at the top of the tree, he began to spin strands of his web this way and that, twisting around and under branches, weaving in and out of pine needles, and generally scurrying all over the place in that tree, leaving a trail of his web wherever he went.

By the time the little spider was done, he was exhausted, and gladly scurried off to his own favourite sleeping web to rest, reaching it just as the sun was rising in the Eastern sky that Christmas morning.

A short while later, the little family awoke to find their tree changed. No longer were the branches bare, but instead they were covered in fine threads that glittered like strands of silver and gold in the light from the morning sun.

As he drifted off to sleep, the little spider heard the cries of joy and surprise coming from the mouths of the amazed family, and smiled to himself, knowing he had made it happen, and feeling very glad he had done so.

A small selection of other books by Victoria Zigler 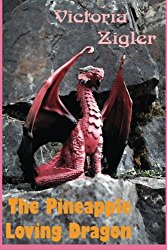 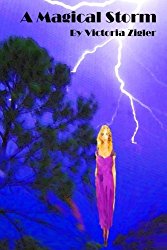 One of the recent reviews for Witchlet on Goodreads

The Witchlet is a lovely story about a nine year old girl, Paige, who is a witch. Paige is an obliging girl who is happy to assist other people in need but she has a quick temper and bears a lot of unjustified guilt due to an unfortunate accident, when she was only three years old, when her uncontrolled magic powers resulted in her cousin being injured and permanently disfigured. Paige’s aunt has never forgiven her and when she comes to visit, Paige’s mother hides all indications that she is a witch.

Paige is frustrated and the reasons are threefold: 1. her father was not able to cope with the idea of her being a witch and left her and her mother to manage on their own, 2. people do not have faith in her abilities initially due to her age and she is tired of being treated like a child, although she is one and her powers don’t change that fact, and 3. her guilt and her aunt’s attitude towards her which are things she has been unable to change.

In this book, Paige performs an act of magic which saves the life of a three year old girl, a feat for which the girl’s grandmother is extremely grateful. When Paige’s aunt comes to visit after this piece of magic, certain disclosures and events are put in motion which will change life for Paige. Will these changes result in positive changes to Paige’s life? You’ll have to read the book to find out

You can download all the other books in all formats and audio from Amazon: Amazon UK

and on: Amazon US

Victoria has a great many reviews on Goodreads and I suggest that you head there first to read: Goodreads

My name is Victoria, but most of my friends and family call me Tori. Feel free to do the same.

Born in the shadow of the black mountains in Wales, I now live by the sea in the south-east of England with my husband, Kelly, a degu named Joshua, a pair of chinchillas named Mollie and Maizie, and a West Highland White Terrier named Lilie.

Having battled with glaucoma since birth, I now find myself completely blind. But I didn’t let that stop me from chasing the dream I’ve had since I was a young child: the dream of being a published author. I’ve loved to read and write since I learned how, and always wanted to get my work published. Finally, in 2012, I made that dream come true by self-publishing eBooks via Smashwords. Three years later, I began using CreateSpace to make my books available in print. So now I’m a published author of children’s fiction, as well as a couple of poetry collections; all of which are available in multiple eBook formats, and as paperback books.

Reading and writing remain my favourite things to do, apart from spending time with my husband, and our rodent gang, of course. I also enjoy doing crafts (such as card making and knitting). Plus, I dabble in things like roleplaying games (such as Dungeons And Dragons) and figure games (such as BattleTech and Monsterpocalypse) from time to time, and enjoy watching movies and TV shows as well as listening to music. On top of that, I have an interest in history, especially stone age and Egyptian history, and in space exploration. I also love almost anything to do with animals and nature. I have to say “almost” because I’m not too keen on spiders and creepy crawly things, though can pretend they don’t exist if they don’t come too close to me.

My thanks to Victoria for her lovely story  and I would also like to invite you to share your fiction here too in December with one of your stories.

If you are already in the Cafe and Bookstore then please send the following to sally.cronin@moyhill.com:

If you are new to smorgasbord the please send the following to sally.cronin@moyhill.com:

Thanks for dropping in and I look forward to hearing from you soon with your stories.