Children’s author Annabelle Franklin with a modern twist on an old fairy story and a cautionary tale..

Once upon a time there was a beautiful princess called Clelia. She lived in a magnificent palace with her mother the King and her father the Queen. (No, readers, that’s not a misprint – her mother wore the trousers, and her father was a Queen in every sense of the word.) They ruled over the prosperous kingdom of Chelsitania, where everyone was posh.

The King and Queen had one great sorrow: they couldn’t find a suitable husband for their daughter. Clelia had been spoiled rotten and was such a brat that no self-respecting prince wanted a bar of her.

On her sixteenth birthday and with Christmas approaching, her parents gave her a golden ball. ‘This is a rubbish present,’ she said sulkily. ‘I wanted a German sports car.’ And she flounced out into the courtyard.

She sat down on the low wall surrounding the lily pond and gazed into its murky depths. Then she spotted a frog sitting on one of the lily pads.

Maybe this ball isn’t so useless after all, she thought, remembering the old tale about the frog who turned into a prince. And she threw the ball into the pond.

‘Oh dear,’ she said to the frog, ‘I seem to have dropped my ball in the water. Can you bring it back to me?

‘Ribbit?’ cried the princess. ‘What does that even mean?’

‘Oh, you’re useless,’ said Clelia. She got up and stamped back towards the palace.

She’d just reached the door when she heard something hit the ground behind her. Turning round, she saw the golden ball lying on the crazy paving.

She looked at the frog, who was still sitting on the lily pad. ‘Thank you!’ she said, picking up the ball. ‘Now, I guess you want me to do something for you.’

‘That’s right,’ said the frog. ‘Sorry about the “ribbit” routine – it was my feeble attempt at a joke, but I’m afraid it fell flat.’

‘Well, not to worry,’ said the princess. ‘We can’t all have an amazing sense of humour. So, what’s the deal?’

That wasn’t quite how Clelia remembered the old tale, but she wasn’t too worried. Once he’d turned into a handsome prince, she’d be happy to stay with him and have his children.
That night’s banquet was a grand affair. The King wore her best suit and the Queen was decked out in his finest gown and wig. All the most important people in Chelsitania came to the feast.

They were just starting the soup when the frog hopped up on the table.

‘Ee-ww!’ said the Queen, recoiling in disgust. ‘Somebody take that away!’

‘No!’ said Clelia. ‘He has to eat from my plate and drink from my goblet.’

‘How absolutely vile,’ said the Queen.

The King smiled ruefully at her guests. ‘Teenagers, eh? What can you do?’

To tell the truth, Clelia wasn’t too happy about having the frog on the table either. But she told herself it would all be worth it in the end.

It was an embarrassing meal, because the frog drank a lot of wine and kept telling stupid jokes that no one found funny. The more he drank, the stupider the jokes got.

At bedtime Clelia had to lift the drunk frog onto her pillow, as he was incapable of hopping up there. He snored and belched and farted all night, keeping her awake. She began to wonder what sort of man he would be once he was a prince.

Had she made a terrible mistake?

As if reading her thoughts, the frog woke up and said, ‘I’m sorry about tonight, I was nervous.

All those people, you know. It’ll be different once we’re married – we’ll be great together, you’ll see!’

At last, Clelia dropped off to sleep. In the morning, she and the frog woke up at the same time.

‘Bloody hell,’ he groaned. ‘My head feels like it’s been eaten by an owl.’

‘Shut up,’ said Clelia. ‘It’s time for the magic.’ Steeling herself, she leaned across and kissed him. ‘God, your breath stinks.’

Then she realised he was still a frog.

‘WTF?’ she shrieked. ‘You were meant to turn into a prince!’

‘Was I?’ said the frog. ‘I don’t remember that being mentioned. Still, never mind. I’m sure I’ll get used to living in the palace.’

‘Are you saying I still have to marry you?’

‘Well, tough,’ croaked the frog. ‘You know what happens in Storyland if you don’t keep your side of a bargain.’

Clelia knew only too well the terrible things that could happen in Storyland if you didn’t keep your side of a bargain. So, with great reluctance, she married the frog, and consoled herself that at least he wasn’t Bluebeard.

The moral of the story is, never sleep with a guy on the first date.

Annabelle Franklin is the author of two children’s books, ‘Gateway to Magic’ and ‘The Slapstyx’. Her short story ‘Mercy Dog’ has been published in award-winning anthology ‘Unforgotten: The Great War 1914-1918′ (Accent Press). She is a member of Swansea and District Writers’ Circle, and her short story ‘Haunted by the Future’ appears in the Circle’s 2016 horror anthology ‘Dark Gathering’.

Annabelle lives on South Wales’s stunning and magical South Gower coast. She shares her chalet home with two rescued sighthounds and blogs from the Literate Lurcher, well her two lovely hounds do.. Pearl and Millie.. quite the pair. 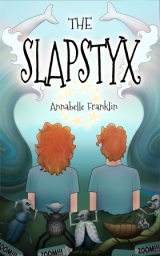 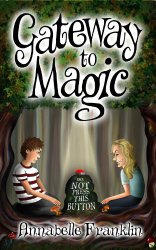 One of the reviews for Gateway to Magic on Goodreads

Steven Topcliff loves nothing more than sitting at home and playing videogames. But when his cousin Tracy visits she entices him to take a trip to the woods and when there she dares him to press a big red button. But what will happen if he presses it, and will he dare to do it?

I can’t believe how much I loved this book! ‘Gateway to Magic’ is an amazing fantasy adventure that reminds me a lot of tales like Alice in Wonderland. Steven’s cousin Tracy is an annoying girl and dares him to press a button which will take him to Fairyland. He doesn’t want to do it but he doesn’t want to appear scared either. The story is told in the third person and is so well imagined, I’m really amazed at how enjoyable this book really was.

It’s not really a spoiler to say that Steven does press the button and ends up in Fairyland. The adventure starts right away when Steven meets a strange character and there’s never a dull moment after that. The tale moves across different locations in Fairyland, the action is quick but you never get confused over where you are despite the fact that there are so many strange and unusual things about Fairyland. Along the way Steven has several adventures, all the while trying to get back home. These adventures are all so well imagined and so interesting that I couldn’t put the book down, constantly trying to see what happened next!

The characters in the story are well thought out, I particularly love Nigel and all the scenes with him. Not only are his circumstances funny but because of what he is, there are constant funny moment throughout the book. Steven’s character is an interesting one that many kids will recognise even though he’s not always that likeable. However I liked the way he developed through the story and it’s something some kids might recognise in themselves too.

I won’t go into any details about the rest of the story but it is really amazing with so much happening and a brilliantly good ending that is very satisfying. I liked the interesting twist of the question at the end. This story really has an amazing and almost ‘Alice in Wonderland’ wacky feel to it. Franklin has done an amazing job of creating a tale and fantasy world that is so, detailed, so different, and yet believable. I actually read and finished this book in one day I was that engrossed.

I’d really recommend this book to any keen readers of fantasy. Though aimed at children some adults with an imaginative mind might enjoy reading this too, I certainly did! It’s a brilliant book from start to finish and made all the more interesting by the videogame element. I can’t wait to read more of this author’s work!

And read more reviews and follow Annabelle on: Goodreads

My thanks to Annabelle for sharing her story and I know she would love to hear from you.. Thanks Sally.