This is the second post from regular contributor to the archive posts, author Janet Gogerty.

Janet explores a subject that relevant to all of us who have works in progress… and then find when we get around to finishing the project the world has moved on from the original start point, including events, locations and technology.

How long does it take to write a novel? 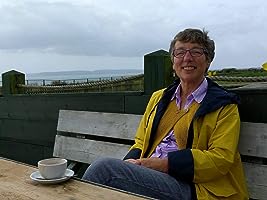 How long does it take to write a novel? I am going to go for 2014 as the conception of my latest novel ‘At The Seaside Nobody Hears You Scream’. The character of Tobias Elliot Channing, the holder of a degree in psychology and registration as a private investigator, first appeared in a short story ‘The Ambassadors’ in Audio Arcadia’s audio book anthology imaginatively titled Short Stories Volume One.

It then appeared in a paperback edition An Eclectic Mix Volume One in 2015, with a wonderfully colourful cover. Toby’s actual birth had come about when our exercise for writers’ group was to create a detective character. The story idea came from Pete at my other writers’ group – write something inspired by the painting The Ambassadors by Hans Holbein the Younger which hangs in the National Gallery.

In February 2014 the Valentine’s Night Storm gave me an idea for the start of A Story, but what the story would be I had no idea. Compared with other natural disasters in the world our storm in Britain was a minor event, but three people were killed. Our house shook during the night even though we are ten minutes walk from the cliff top, further along the coast, at Milford-on-Sea, a Valentine’s romantic dinner turned into a disaster movie; a ‘freak’ wave picked up shingle and smashed it through the panels that make up the front of the art deco building, the diners were eventually rescued by army vehicles. Metro: Dream Valentines Day meal turns to nightmare.

The weather forecasts warned everyone to stay away from the coast the next morning; so we walked ( okay I dragged Cyberspouse, saying it would be fun to take the scenic route to the local shops ) to the cliff top to see high tide. It was exciting, no chance of being blown off the cliff as you could lean into the south westerly coming off the sea and taking your breath away. But as we clung to the low fence on the cliff top and peered over we got a shock, piles of smashed wood washed over by the waves, rows of beach huts reduced to matchwood. And that is when I had my idea; but you will have to read the novel to find out why Ellen Green was so afraid when she looked over the edge of the cliff that morning.

Fed up with waiting for me to get on with writing the novel, Toby Channing drove his camper van into two very different novellas I was writing, which along with The Ambassadors are part of the collection ‘Someone Somewhere’ published in 2017. ‘Someone For The Weekend’ and ‘Durlswood’ became two of his strangest cases.

What has happened in the intervening two years? Lots of blogging and writing; strangely only five months pass during the novel and the passing of time makes no difference to Tobias Elliot Channing because he is firmly fixed in 2014. It is just as well this novel had a fixed starting point, because writing novels ‘in the present’ is just about impossible. How the world has changed in the past five years…

Thanks to Janet for sharing her journey to publishing her latest novel, and I am sure that like me you have a similar tale to tell… Thanks Sally

25 thoughts on “Smorgasbord Posts from Your Archives 2020 – How long does it take to write a novel? by Janet Gogerty”