I had just turned 16 when I saw this movie when it hit the cinemas in the UK.  I was mesmerized, but not because of the stunningly talented Barbra Streisand, but because I had an enormous crush on Omar Sharif.  My parents had taken me to see Laurence of Arabia in the cinema when I was ten and then to Doctor Zhivago in 1965…Both had amazing musical scores and the title tracks are legendary.

However, I immediately fell in love with Fanny Brice and she stoked the flames of my desire to become an actress and singer. As with all the musicals that I loved, as soon as the score was available in the music shops I had bought and memorized all the lyrics. This song also hit the romantic button to perfection, and I was willing her to get to that liner with every ounce of my being. 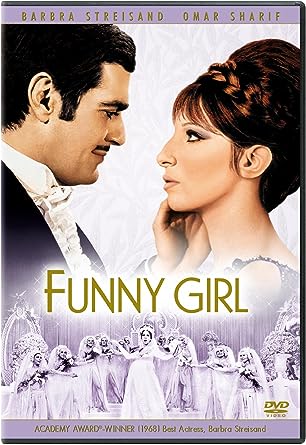 The film was directed by William Wyler and the screenplay by Isobel Lennart, based on her book. The film loosely follows the career of Broadway star Fanny Brice and her relationship with gambler Nick Arnstein. The film was produced by Fanny Brice’s son-in-law Ray Stark with lyrics by Jule Styne and Bob Merril. Barbra Streisand had played the role on Broadway and now won the Academy Award for Best Actress for the film version.

Two songs stand out for me one being His Love Makes Me Beautiful, and the wonderful Don’t Rain On My Parade.

Buy the film: Amazon US

I hope you have enjoyed this musical interlude and more in a couple of weeks….thanks Sally.