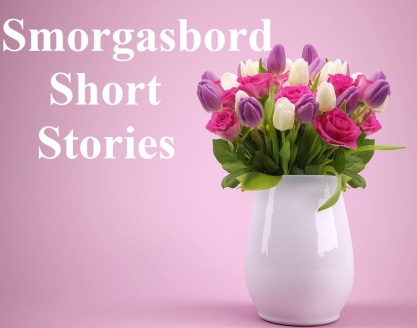 Usher Matthews was a good looking man. Tall, with jet black hair inherited from his Italian grandfather, he could charm the birds out of the trees… or out of a nightclub and into the back of his car which was as flash as he was. The life and soul of any party, he would splash the cash and whilst the fairer sex adored him, males clustered around him on the off chance some of his luck with the girls might rub off.

He had fallen into the estate agency business through sheer luck when he left school. His best friend’s father owned several offices in the surrounding county and he offered Usher the opportunity to join the firm along with his son as a trainee. His friend soon discovered that he was unable to come out from under his friend’s shadow, leaving to join the army, but Usher was born for the job. He worked his way up to branch manager in an exclusive area by his mid-twenties, and as a salesman he excelled. Sometimes his unsuspecting clients would wonder why they ended up with the house they did. Good old Usher always popped round and reinforced all the positives about the property they might have overlooked even when the back wall of the house subsided.

Usher rarely took any of his expanding group of acquaintances home to the modest terrace house where he was brought up. To be honest, his parents, who were quite shy and retiring, had no idea how they had produced this charismatic son of theirs. His father privately wondered if he had not been switched at birth; especially on the rare occasion he joined Usher down the pub for a pint. He would sit there quietly sipping his beer and watch as people gathered to bask in the radiance that emanated from his offspring.

More and more he refused his son’s infrequent invitations. Eventually he and his equally mystified wife sold their home and moved to Bognor Regis to retire. Usher barely noticed their departure and would phone once in a while and threaten to come down for a weekend. His parents soon realised that these promises were empty, resigning themselves to the fact that their son was far too involved in his own life to be bothered about them.

Whilst apparently an open book as far as the world was concerned, there were a couple of things that Usher liked to conceal from people. One was his pathological fear of snakes that did not enhance his macho and gym-toned public persona. At five years old his well-meaning parents had bought him a Jack-in-the box type toy for his birthday. He had screamed like a girl when a two foot and very life-like banded snake had launched itself at him from the stupid thing.

The other secret was his little gambling habit. He did love those horses but unfortunately they did not love him. This had not been too bad when property was selling like hotcakes, but with the downturn, his commission was as extinct as a Dodo. This little matter was resolved by the charm offensive, seduction and marriage to Rebecca, the daughter of a multi-millionaire retailer who gave them a rather nice cash settlement on their wedding day. Just in time, as recently the account with his bookie had plummeted deeply into the red. Their frequent telephone conversations had become downright hostile.

Apart from the gambling there were also some other side activities that Usher kept from his wife who would look at him adoringly when he walked through the door each evening. She seemed to accept that he needed to work late a couple of evenings a week, taking potential clients to dinner or showing properties in the longer summer evenings. He was careful to make sure that he didn’t bring home evidence of his dalliances, thinking himself rather clever at having his cake and eating it.

His wife was pretty enough he supposed, but he also thought she was not very bright. He did however appreciate the generous monthly allowance that her father paid into his daughter’s bank account which he offered to manage for her. She had agreed readily enough, and to his knowledge never bothered to check her bank balance. Usher decided to do a little mining into the account and gradually syphoned off thousands of pounds to cover his debts over the next few months. To celebrate he suggested that he and Rebecca head off to Thailand for a second honeymoon.

They stayed at the best hotel close to the sandy white beach where the calm waters invited the visitors in for swimming and water sports. For the more adventurous, deep sea snorkeling was on offer, and surprisingly the normally reserved Rebecca, took to the activity like a duck to water. She headed off with one of the undersea guides every day for several hours returning exhausted and full praise for her guide’s patient tutelage.

Usher was a little miffed if he was honest at not being the centre of attention. He got a bit bored lying by the pool and sipping a selection of exotic drinks off the cocktail menu. He spent some time flirting with some of the younger bikini clad sun worshippers; knowing that he would be unlikely to get away with anything more in these restricted confines.

At the start of the second week Rebecca suggested that he might come with her out to a small reef just a five minute swim off shore. Taken by surprise by her rather seductive smile and the sight of her now bronzed body in her bikini he nodded his agreement. He donned his mask and after some tips from Rebecca on how to breathe and dive with his apparatus, they headed away from the beach.

He had to admit it was pretty stunning seeing all the brightly coloured fish and coral life and he relaxed into the adventure. Suddenly, his wife appeared right in front of him with her hand behind her back. She gestured to him to rise to the surface.

They both removed their masks and as the warm water lapped around his neck he saw Rebecca’s gloved hand reach out towards him rapidly. He felt an excruciating pain in his neck and looked down to see the brightly coloured, writhing body of a snake. As his vision blurred he screamed like a girl and stared at his wife treading water calmly.

As his eyes met Rebecca’s cold and steady gaze, she mouthed just one word.