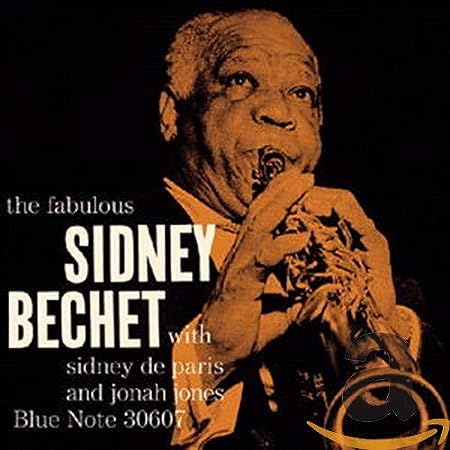 Who was the New Orleans jazz pioneer who did most to make this music a unique art form? When this question is asked, the name of Louis Armstrong invariably comes to mind, and rightly so. But there is another jazz musician whose name deserves to be coupled with Armstrong as the greatest of the New Orleans Jazz players. His name is Sidney Bechet.

Sidney BechetBechet was born in New Orleans in May 1897, just three years before his compatriot, Louis Armstrong. Although the two boys grew up in the same city, their home environments were worlds apart. Armstrong grew up in dire poverty, living alternately with his mother and a succession of “stepfathers” and his grandmother, and spending time in a reform school.

Sidney Bechet, who was of Creole ancestry, grew up in a middle class environment. His father, Omar, who was a shoemaker, played the flute as a hobby. Indeed, music had an important role in the Bechet household, as Sidney’s four brothers also played instruments.

His brother, Leonard, played the clarinet and trombone, and it was to the former instrument that eight-year-old Sidney was attracted. Leonard, whose main interest was the trombone, passed along his clarinet to his younger brother.

At first, Sidney played in the family musicales – waltzes, quadrilles, the polite music of the middle class. But as he grew into adolescence, Sidney was attracted to the syncopated music played in the dance halls and brothels in the Storyville District of New Orleans.

As a boy, he would watch the street parades in which jazz bands played. Young Sidney was so attracted to the music, that he often played hooky from school. And as he became more proficient on the clarinet, Sidney played in local jazz bands, such as the Young Olympians. His playing so impressed Bunk Johnson, the legendary cornet player, that Sidney was invited to join Johnson’s band, the Eagle Band. Sidney gained much experience, playing in dance halls, and for picnics, and parties.

Bechet left New Orleans for the first time when he was 19, traveling to Chicago with pianist, Clarence Williams and his variety show. Bechet’s big break came in 1919 when the composer-conductor Will Marion Cook asked him to join his Southern Syncopated Orchestra for an engagement in London.

Here Bechet came to the attention of the noted Swiss Conductor, Ernst Ansermet, who conducted the music of Stravinsky for the Ballets Russa. Ansermet wrote in a Swiss musical Journal, “The extraordinary clarinet virtuoso Bechet is an artist of genius!”

Here is a selection of Sidney Bechet’s music…

The romantic and endearing “Petite Fleur” was composed by Sidney Bechet in 1952 as an instrumental and lyrics were added in 1959 by Fernand Bonifay and Mario Bua. Bechet merges the beautiful virbrato and fluid melodic motion of his soprano saxophone with that of his clarinet in this piece which quickly became a jazz standard. Shortly afterwards Paddy Roberts, a British songwriter, added a new set of lyrics “Petite Fleur (Little Flower)” prompting a recording by Teddy Johnson and Pearl Carr. Monty Sunshine with Chris Barber’s Jazz Band recorded the song as a clarinet solo and it became an international hit peaking at #5 on the US Hot 100 and #4 on the UK charts. The British super star Petula Clark recorded “Petite Fleur” in French for her hit album “Hello Paris” in 1962. “Petite Fleur” remains a treasure in La Chanson Française.

“Perdido Street Blues “, composed by Juan Tirol, was originally recorded by the Duke Ellington Orchestra, of which he was a member, in 1941. In 1944 Ervin Drake and Hans Lengsfelder added lyrics. This New Orleans style jazz blues gets off with an amazing clarinet solo, exuberant and bursting with life and Louis Armstrong joins his friend Sidney Bechet to make this blues a work of art. Perdido in Spanish signifies ‘lost’ or ‘indecent’ and refers to Perdido Street in New Orleans.

“Moulin à Café ” is from the album of the same name and was released in 1950 on the Vogue label. This album is emblematic of all that is associated with Bechet, who is accompanied by the Claude Luter Orchestra. Claude Luter was a French clarinet player who worked with Bechet many times during his séjours in France. The recordings are a mixture of studio sessions and live concerts and highlights the mastery of his clarinet, reminiscent of the sorrowful vocals of Bessie Smith or Big Mama Thornton. What makes Bechet’s work so poignant is his ability to vocalise his instrument with great emotion. Moulin à Café is the result of of a seven year relationship with Claude Luter, out of which he created and recorded many of the hits that cemented his career.

“La Nuit est Sorcière (Night Is A Witch)” is a ballet composed by Sidney Bechet in 1953 based on the choregraphy of Pierre Lacotte. Bechet wrote this ballet fusing the New Orleans style of jazz with symphonic variations of classical music. The ballet takes place in an attic with the sleepwalker and his servant. The servant hypnotizes his master and takes him on an extraordinary adventure. One night his fiancée, guided by his brother and his sister, tries to awake him up, but fails. However, the young man eventually puts up a fight with his servant and comes back to his senses, finding happiness again. This recording was done under the baton of Jacques Bazire with l’Orchestre Symphonique de Paris. The Ballet was directed by Marcel Martin and features Pierre Lacotte, Josette Clavier, and Gene Robinson. The recording was released on Vogue.

My thanks to William for sharing this incredible music with us and thank you for dropping in today.  As always your feedback is very welcome.