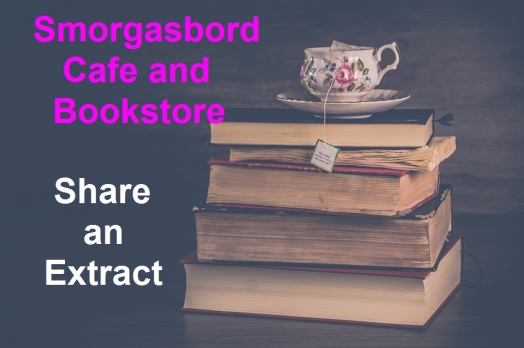 Welcome to the new Cafe and Bookstore  New Series 2020 – Share an Extract with an opportunity to show one of your earlier books some love and attention by sharing an extract.. Check out the above link for all the details.

Desperate to find a version of reality she can live with, Miira Tahn sets out to explore Innerscape, but along the way she discovers there are other worlds open to her as well. The HUBs connect Innerscape to every location in the virtual universe, and some, like the gaming world of the Shogunate, prove to be a lot of fun.

Back in Innerscape, however, a darker game is unfolding. Someone wants the Burned Man silenced, but only the AI knows which body is where, and it’s immune to threats. People, however, are so much easier to manipulate.

Caught in a web of intrigue and deceit, Miira and her friends become pawns in a game where losing means death.

‘The Godsend’ is the second book of the Innerscape cycle and corresponds to Episodes 2 and 3 of the original series.

An extract from the book – Home is where the heart is

Despite it being the end of spring, the day was overcast and sullen when the taxi bearing Kenneth Wu drew up in front of his house.

“We have arrived,” the onboard AI said politely. But Kenneth refused to take the hint. Instead, he stared up at the immaculate little Victorian cottage as if he had never seen it before.
When he was a kid, the house had been a waypoint, a place to rest before going on to some place else, and little in his adult life had changed that sense of transience. Now though, he would have to go inside and stay there, licking his wounds until something happened to kick-start his life again.

But what if nothing ever happened? What if that house swallowed him whole and never let him go?

“Dear Passenger,” the taxi’s AI said apologetically. “I must ask that you vacate the taxi as another Passenger has requested transportation.”

“Of course,” Kenneth said, a bitter smile twisting the corner of his mouth. Apparently not even the taxi company wanted him around. At least the house would never throw him out.

“Here,” he said as he jabbed his thumb at the meter.

The biometric device hummed happily as it read his thumbprint and charged the fare against his account.

Yeah, Kenneth thought as he slid out of the taxi and began walking up the artfully designed crazy paving that led to the front door. A box trundled three steps behind him, its wheels going clickety clack on the uneven flagstones.

The box contained the sum total of the last five years of his life: a mug, a couple of first edition text books, some clothes, the folded frame of his exercise bicycle, and a few letters of appreciation from the families of his patients. Everything else, all the important stuff, was proprietary, born of his mind, but not his to take.

At least he would not bring shame to the family by going to jail. That was something.

“Find something good in every day,” the therapist had advised his teenaged self, and Kenneth had tried to take her advice. But if not going to jail was the only good thing to emerge from this awful day, then what on earth was he supposed to find for the next day, and the day after that?

Placing his palm on the keypad, Kenneth let himself into the house and quickly reached for the control panel next to the doorframe, but he was not quite quick enough.

“Welcome ho-” The voice of the house AI began before it was cut-off mid greeting.

No, Kenneth thought as he listened to the echoes repeat down the long, empty hallway. This is not my home.

Home was his laboratory in Innerscape, but he would never be allowed to go there again.

I couldn’t wait to get into the second book of the Innerscape Series and check in on Miira, Kenneth, and the rest of the characters. AC Flory captured my imagination and heart with the first book, Miira, and she didn’t disappoint with the second. As good as the Book One was, it was also a set-up for The Godsend where the relationships deepen and challenges escalate.

Miira develops a true friendship with teenage Jaime and enters the virtual gaming world, a new experience for her. Kenneth struggles with the fallout of his actions from the end of Book One. And Marissa enters the story, an assassin with her future on the line, a future she’s willing to kill for without hesitation. Their stories start to overlap, the action and danger take off, and it’s a nail-biter by the end. Book Three promises to be quite a ride.

As in the first book, Flory’s world-building is captivating. Her knowledge of virtual reality, of the gaming world, and of Japan (where Jaime’s game takes place) is stunning. I was completely taken in and convinced of the authenticity of the places and experiences in the book.

That authenticity extends to the characters. Miira was always an engaging character with a strong personality and softer vulnerability. She grows in this book, pulled out of her shell by Jaime, who also blooms and drew me in. All of the characters are beautifully three dimensional, with a full range of emotions and honest motivations. Though set against some amazing world-building, this is primarily a human story and I was/am invested in their lives.

I’m eager to pick up the third book and continue the Innerscape journey. I highly recommend this book to sci-fi and fantasy readers, gamers, anyone who’s fascinated by the virtual world and anyone who loves great world-building and rich characters. Happy Reading.

A selection of books by A.C. Flory

I am Australian, female and an Indie science fiction/fantasy writer, not necessarily in that order. I am fascinated by technology, but my true passion is for the softer sciences – such as biology and psychology. I want to know what makes things tick, both inside and out. Like a little kid, I keep asking ‘why?’ and ‘why not?’.

To find out more about me and my writing, please join me on my blog : A.C Flory wordpress