Welcome to the Cafe and Bookstore  New Series 2020 – Share an Extract with an opportunity to show one of your earlier books some love and attention by sharing an extract.. Check out the above link for all the details.

Today Kevin Cooper shares and extract from his memoir  Miedo 2: A Reckoning With Fear 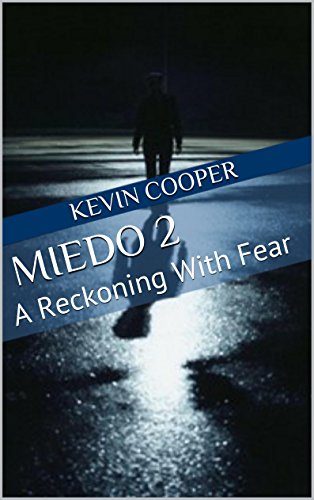 Miedo’s story continues in this chilling sequel to Meido: Living Beyond Childhood Fear. As Miedo comes into young adulthood, he is confronted with new demons while he searches for answers to his past through Spiritualism. But, rather than finding answers, he is left with more questions as a plethora of paranormal experiences occur in his life once again…

An extract from the book

Recollections of torment during his childhood, of the attic ceiling and walls closing in on him, the shaking of his bed and the demons that leered at him, among other horrifying experiences he couldn’t explain, rekindled the desire within him to conquer evil so no other child would have to suffer as he did.

The fire burns within and leads him to ask his aunt if she thinks he might have what it takes to become a medium, like her. Encouraged by his interest, she gets out some cards, the like of which Miedo has never seen before and holds the back of the top card up to him,
“What is on this card? I don’t want you to guess, I want you to empty your thoughts, focus on the card and tell me what comes into your mind.”

Miedo stops thinking about everything and focuses on the back of the card facing him. He imagines some sort of transparency through the card, but can only make out some wiggly lines.

“The only thing that comes to mind is some wiggly lines. I thought I saw them through the card.”

His aunt smiles and turns the card over to reveal four wiggly lines. She holds up another one saying, “And this one?”

She smiles again and reveals the black outline of a square. “One more…”

Once again he is correct. His aunt puts the card face-up to the light, but nothing can be seen through it.

“Would you like to start coming to the spiritualist meetings with me?”

“Ok, I have one this Saturday, come here first and we’ll go together. You can learn more about it then and meanwhile we can practise with the cards to help your mind grow stronger. You definitely have something, but you need a strongly focused mind if you’re going to be a spiritualist. Whether you become a medium or not remains to be seen.”

At the first spiritualist meeting, Miedo sits amongst others who have come to the meeting which is in a church-like setting but much smaller. There are rows of seats to either side and it is quite full. His aunt is introduced and then she welcomes everyone and looks around the room a bit. All is quiet.

“I’m getting a message for Sally…” she pauses, “is there a Sally in the room?”

“Sally, did you know somebody called Joe?”

Sally breaks an almost inaudible, “Thank you.” The woman sitting next to her puts her arm around Sally with a knowing nod and teary eyes. Sally cries into her tissues.

Several other messages are given to different people, deep feelings are stirred, one person becomes so emotional she gets up and leaves, apologising all the way to the door. After an hour the service ends and people waiting outside for their taxis comment on how good the service was.

Miedo is in awe of his aunt and wishes he was gifted like her.

I enjoyed Cooper’s first memoir, Miedo: Living Beyond Childhood Fear, and when I finally picked up this sequel, I liked it even more than the first. It continues the story of Cooper’s early life through his teens, including his struggle to find his place in the world, understand the role of faith in his life, and control the demons that continue to plague him.

Told in the 3rd person, the memoir reads like a story, and Miedo is a highly sympathetic character. I related to his feelings of displacement, and the rambling style of Cooper’s narration perfectly reflects that time of life when young adults are stumbling about and trying to define who they are. In some ways, the narrative reminds me of Frank McCourt (Angela’s Ashes) as it picks up on the day to day seemingly insignificant events that make up a life. People and jobs, plans and friends come and go like water through Miedo’s fingers. His sense of belonging never seems to have a strong anchor though there are some relationships that he relies on.

Cooper does an excellent job of telling his story in Miedo’s authentic “voice,” reflecting his age and education at the time events unfold. The narrative also happens in the moment. In other words, this is not a memoir that the authors relates with the benefit of hindsight, but one that unfolds for the reader as it happens.

Miedo 2: A Reckoning with Fear isn’t a long read. Cooper’s style is unique and his story is addicting. I recommend this book to anyone who enjoys memoirs and stories about the struggle to overcome difficult childhoods. I’m looking forward to the next book in the series.

A selection of other books by Kevin Cooper

You can connect to Kevin

47 thoughts on “Smorgasbord Cafe and Bookstore -Share an Extract – #Memoir #Drama – Miedo 2: A Reckoning With Fear by Kevin Cooper”