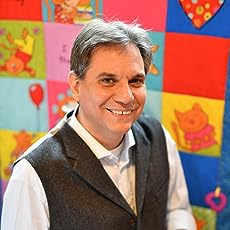 Nicholas C. Rossis lives to write and does so from his cottage on the edge of a magical forest in Athens, Greece. When not composing epic fantasies or short sci-fi stories, he chats with fans and colleagues, writes blog posts, and enjoys the antics of two silly cats and his baby daughter, all of whom claim his lap as home. His books have won numerous awards, including the Gelett Burgess Children’s Book Award.

In addition to his best-selling series, Pearseus, he writes short science fiction/speculative fiction stories, many of which have appeared in various collections and anthologies. These include Infinite Waters, which was voted one of the best 50 Indie books of 2015.

A small selection of books by Nicholas Rossis

One of the reviews for The Runaway Smile on Goodreads

The Runaway Smile is a delightful story about a young boy who wakes up one morning to find that his smile has disappeared. And so begins an eventful journey to find it and bring it back to its rightful place…his face!

If only I had this book when I was a child – I could easily imagine it being a class (and bedtime) favourite!

I love how Nicholas uses nonsensical situations to make a point about the importance of a smile (think book-reading superhero dog, a shirt-eating closet monster and salesman who sells subatomic particle accelerators!). As if the story itself wasn’t enough to make you feel all tingly and warm inside, Nicholas has teamed up with Dimitri Fousekis to bring you the most gorgeous and distinctive illustrations that bring it to life.

The Runaway Smile is so heartwarming, wholesome and will make you chuckle. I loved it and definitely think it should be a permanent fixture on the shelves of all budding bookworms.

Vashti Quiroz-Vega is a writer of Fantasy, Horror, and Thriller. Since she was a kid she’s always had a passion for writing and telling stories. It has always been easier for her to express her thoughts on paper.

She enjoys reading almost as much as she loves to write. Some of her favorite authors are Stephen King, Michael Crichton, Anne Rice, J.R.R. Tolkien, J.K. Rowling and George R. R. Martin.

She enjoys making people feel an array of emotions with her writing. She likes her audience to laugh one moment, cry the next and clench their jaws after that.

When she isn’t building extraordinary worlds and fleshing out fascinating characters, she enjoys spending time with her husband JC and her Pomeranian Scribbles who is also her writing buddy.

One of the recent reviews for Fall of Lilith

Amazon Reader 4.0 out of 5 stars An immersive fantasy with a new take on an old story  Reviewed in the United States on May 7, 2020

I really enjoyed this immersive fantasy read. It’s based on the fall of the angels from the Old Testament, but it brings an all-new spin to the story with the role of Lilith. I was engaged by all the details of this version of Heaven, and the progression of Lilith from a relatively harmless girl to a tragic anti-hero is interesting to watch. I do wish she had a little bit more goodness in her because that would’ve made her more sympathetic as a main character. Yet I also understand the restraints of telling a story like this, in which there is clear good and evil. After the fall of the angels, the story takes us to earth, where the angels are banished. Once again, I was pleased at the combination of both familiar and unexpected elements. Overall, well written and imaginative!

After spending around thirteen years as an ordained Buddhist monk, living in a Zen Buddhist temple, and six years after a life-changing injury following a surgical error, Harmony Kent returned to the world at the tender age of forty.

Now, she is famous for her laughter, and has made quite the name for herself … she’s also, um, a writer … and fairly well known for that too. She’s even won a few awards. Harmony lives in rural Cornwall with her ever-present sense of humour, adorable husband, and quirky neighbours.

Harmony is passionate about supporting her fellow authors.

A selection of books by Harmony Kent

A recent review for Creative Solutions

Robbie Cheadle 5.0 out of 5 stars A valuable writing tool  Reviewed in the United States on April 10, 2020

I read and enjoyed one of Harmony Kent’s fictional works and I was sufficiently impressed by her writing to pick up this non-fiction book about writing techniques and inspirational tools when it launched last year. I was not disappointed and learned a lot a developing good writing habits and ways of discovering inspiration for this book.

I have always edited as I write, this is largely due to the fact that I am a perfectionist and leaving something half done is difficult for me. This book encourages writers to not edit as they write but rather to ride the wave of your creativity and go back and edit later. I have tried this over the past week and have added double the words to my WIP. I didn’t not edit completely, but I did a lot less and felt I got a lot more words on paper this way. It is difficult to pick up on an incomplete idea so this advice makes perfect sense so that you get a piece of writing written down while it is fresh in your mind.

This books sets out lots of ideas for writing prompts which I find a great way of sharpening my writing skills. The author’s prompts have given me a lot of food for thought and I certainly won’t be running out of ideas in the foreseeable future. There are also great tips on using Tarot cards, horoscopes, chess boards and other items to generate ideas or to move your story along if you become bogged down or stale with your writing.

I thought this was a valuable writing tool and I will certainly be referring back to it going forward.

Thank you for joining me today for this series and I will be sharing another three authors and their work every weekday during June and July. It would be great if you could share. Thanks Sally.