Welcome to the Cafe and Bookstore with recent reviews for authors on the shelves.

The first review today is for His Revenge (Book Two of the John Cannon Trilogy) by John W. Howell.

America loves John Cannon, its newest hero, and the President wants to present him with the highest civilian medal for bravery for saving the Annapolis midshipman from a terrorist plot to destroy them. While in Washington for the award ceremony, John unwillingly becomes an accomplice in another plan by the same group to attack the credibility of the US President and the stability of the worldwide oil market. There is no way out as John either becomes a traitor to America or causes thousands of innocent people to die if he refuses.
The second John J Cannon Thriller moves from a barrier Island off the coast of Texas to Washington DC, then to Northern California, and finally to Ecuador. John is on the receiving end of an offer he cannot refuse. His avowed enemy Matt Jacobs now wants John to help him shake the reputation of the US in the world political arena. If John refuses, Matt plans to murder innocent Americans including John’s latest relationship. John’s only way out is to pretend to go along with the plan and hope for a miracle. An excellent holiday read.

His Revenge follows on the heels of the previous book, My GRL. I had fun revisiting a great character, John Cannon, an ordinary nice guy forced into the role of a hero. He’s once again kidnapped and trying to outwit the terrorist mastermind plotting to create havoc in the US. I do recommend reading the books in order, even though the author provides adequate backstory to get the gist of what previously happened.

There’s plenty of action and danger, though less than in the first book. The pace starts out a touch slow, but when it picks up, it charges ahead. John isn’t a macho, gun-toting character, and the solutions to his problems rely more on his wits and a clever plan, along with some strongly developed allies that added depth to the story. The characters face some tough choices that will make the reader squirm.

The bad guys are quite diabolical, heartless, and seemed to cover every base. But they also struck me as a touch gullible, especially since they’ve been outwitted by John before. That said, the rationale backing up the plot is detailed and the solution well-crafted. The writing is professional, the dialog and characterization excellent. I’ll be reading more of John Cannon in the future.

Read the reviews and buy John’s books: Amazon US

and on: Amazon UK

Connect to John via his blog: John W. Howell. com

The next author is Barbara Silkstone with a recent review for Smokey Eyes (Cold Cream Murders book 2).. 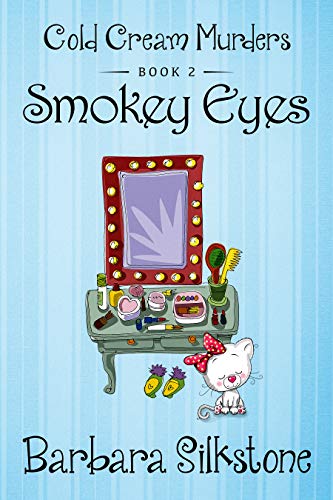 About the book
Olive and Lizzy’s Cold Cream shop on the beach is jumping—business couldn’t be better. But when land shark mogul Brent Toast is found floating in the Starfish Cove marina, with his sneer-side up and a knife in his chest, the prime suspect—among his many enemies—is his brassy daughter-in-law. Can Olive & Lizzy save their friend or will this be the end of the Loud Mouth of the South?

~~~
A series of quirky murders plague Olive Peroni and her Cold Cream shop partner. A psychologist by training and a miracle cold cream designer by luck, Olive leaves her family practice to start a new life in Starfish Cove, Florida. The gals make designer creams for ladies who spend far too much time at the beach. Business is brisk and life is good until bodies start popping and dropping—and Olive must rely on her people skills to separate the killers from their victims.

Olive isn’t a cop, but once again finds herself involved in a case that Chief Officer, Kal ‘Miranda’ is overseeing, and somehow inserts herself once again, as part of the investigation. With such colorful, painted characters and quick-witted dialogue, and just keeping up with Olive, this book is what I consider one of my great escape reads, offering a fun-paced story with interesting and humorously named characters, this book just takes you in to Olive’s sporadic life and keeps you engaged til the very end when only then we’ll learn who the killer is.

Olive has a compulsive need to help solve the crimes she stumbles into at Starfish Cove. Her people skills from being a psychotherapist come in awfully handy when it comes to analyzing suspects.

The story begins with the disembarking of passengers off Nancy’s boat, The Very Crabby, where Olive and Lizzie were attending a get-together with a few friends and unsuspecting characters. Lizzie is afraid of water, she doesn’t like getting her face wet, and sure enough in the kerfuffle with the boat next door with some other friends, turns out the boat owner Brent was just murdered and thrown in the water by someone on Nancy’s boat. Maybe? In the midst of it all, Olive gets thrown overboard and comes face-to-face with the killer underwater – only when it comes to identifying him, all she could see were a pair of smokey eyes in a foggy mist. Now, Olive is concerned that maybe the killer may not be done with her – and he’s not! Olive persists to snoop out who she thinks may have motive for killing Brent and discovers a few reasons why a few people may have wanted Brent dead. And besides being stalked by an unknown killer, Olive has to contend with other problems going on in her beauty business, like the gigolo chasing after her old Aunt Tillie who is really on a mission to steal Nonna’s secret magical cream recipe.

Never a dull moment in Olive’s life between the other little subplots in this book and the interesting and clever characters Silkstone bring to life in this witty little fun and cozy mystery. A bevy of suspects will keep you guessing whodunit til the end in this boat party gone wrong.

A small selection of books by Barbara Silkstone

Connect to Barbara via her website: Second Act Cafe

The final author is Stevie Turner with a recent review for her mystery Finding David.

When Karen and Mick Curtis attend a demonstration of clairvoyance for the first time, Karen is singled out by the medium, Rae Cordelle. Rae has a message from Karen’s son David, who passed over to the spirit world many years before. The message shocks Karen and sends her on a journey of discovery, rocking her previously happy relationship with second husband Mick, David’s stepfather.

Jul 01, 2020 Pete Springer rated it Five Stars it was amazing

What would you do if the person you are married to becomes a murder suspect? Not just any murder—one that involves her son, David. Karen faces this dilemma after Rae, a gifted clairvoyant medium, provides information that suggests that her husband, Mick, may be responsible. To complicate matters, the police sergeant refuses to offer any help after he finds out that Rae claims the deceased spirit of the boy has provided this information.

Karen has complete faith in Rae, but Mick thinks Rae is trying to swindle money with a hoax reading. Is the murderer Karen, Mick, or someone else?

Several elements made Finding David an engaging read. One appealing quality is the relationship that Mick had with David. Because neither character liked the other, this made for some fascinating family dynamics.

Stevie Turner doesn’t waste time getting right into the meat of the story. There were no lulls, and my mind did not wander at any point because the plot was gripping. Take two hours to read this excellent tale and put yourself in Karen’s shoes

A small selection of other books by Stevie Turner

Connect to Stevie via her blog: Stevie Turner on WordPress

Thanks for dropping in today and I hope you will be leaving with some books under your arm.. thanks Sally