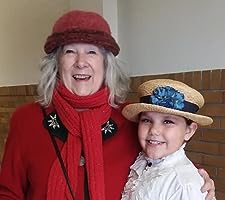 With her extensive background in Fine Arts, English Literature, and Humanities, she creates mixed-media fiber art for exhibitions and her writings that are published internationally. Lynda has been called “A Renaissance Woman” by a number of editors and her work appears in a number of prestigious anthologies in the US, UK, and Hong Kong.

Lynda  creates art and writings from the inspirations of her life-experiences of teaching, travels, and her home life in a century-old home located in the historic Germanic village where her ancestors lived for generations. Her home is situated on a ridge overlooking the 50-mile long, Connoquenessing Creek where she lives with her husband, Bob, and their rescued dogs and cats.

One of the reviews for Star Signs

Robbie Cheadle 5.0 out of 5 stars  Rich and theatrical poems  January 2, 2020
Star Signs: New and Selected Poems is a marvelous book packed with the most beautifully descriptive poems about a wide variety of different topics that are grouped together under the following four sections which indicate their overarching theme: Lights Across the Sky, Distant Legends & Metaphors, Transmutation of Earthy Elements and Seasons, Days and Years.The poet’s use of language is rich and theatrical as is illustrated by the following short extracts:
“Accomplishments seem possible
before dawn
concentric choices are unlimited”“The lively sonata of midday skies
responds to the muted notes of night skies.
Time is temporal. Immeasurable.”“My jewelry box embraces
yesterday’s vanishing dreams
favourite obsessions – polished and hidden.”
This quote is from one of my favourite poems in this collection: Sleeping Beauties.The poems are mainly written in free verse but there are a number that are pantoums, a form of poetry which makes use of repeating lines throughout the poem. It is composed of a series of quatrains; the second and fourth lines of each stanza are repeated as the first and third lines of the next stanza. I am in awe of the poet’s ability to create poems that form a perfect story using this style of poems. The repeated lines lead effortlessly into the new lines, which support them and continue the flow and rhythm of the words seamlessly.

Jean Lee is a Wisconsin born and bred writer excited to share her Young Adult Fantasy fiction with those who love to find other worlds hidden in the humdrum that surrounds us. Her first novel, Fallen Princeborn: Stolen, is available from Aionios Books. She is also the author of Tales of the River Vine, including the novella Night’s Tooth.

Stories are the fire that warms the soul. They melt fear, ignite hope, and spark relationships like nothing else. I’m honored you seated yourself here by my hearth to enjoy my fiction’s light. Please feel free to visit often, for there are many treasures bizarre and fantastic in my imagination waiting to speak with tongues of flame. Then we can talk about the writers that refuel us, as I do on my site https://jeanleesworld.com/, and the stories that stir us like marshmallow sticks poking a campfire’s embers.

One of the recent reviews for Fallen Princeborn Stolen

May 09, 2020 Briar’s Reviews rated it Four Stars and really liked it

Fallen Princeborn: Stolen by Jean Lee is a fabulous, fantastical, young adult novel that will keep you captivated!

This folklore tale follows a young girl trying her best to escape from a horrible situation. Suddenly, she is thrust into a fantasy world of epic proportions! All this girl wants is for her and her sister to be safe, but nothing is as it seems…

If you like world building, this story is for you. It’s full of lush lore and descriptions that will whisk you away into another universe. I was so intrigued by all that was going on, I could hardly believe I binged the whole book. This book is magical, whimsical and wild! The action and thrills just kept going and I barely had a minute to breathe (just how I like it!). On top of that, the characters are great! I felt like they were (almost) real! They had personalities, they grew throughout the story and had feelings and emotions. It was a well balanced story!

I like that Jean Lee finished this story up but left room for the sequel. Nothing kills me like a mighty cliffhanger! There’s still much to learn, but I didn’t feel like I was left disappointed.

I also feel like this book easily crosses the lines across YA, New Adult and Adult. While it does feature teenage characters, I think New Adult and Adult fiction fans will easily enjoy this book. With so much going on, it’s hard to place it in just one category.

If you haven’t picked up this book, I recommend it! It gave me great vibes and it was truly addicting. Four out of five stars.

Jean Lee, Buy: Amazon US – And: Amazon UK – Follow Jean Lee : Goodreads –   website:Jean Lee’s World – Twitter: @jeanleesworld
Thank you for joining me today for this series and I will be sharing another three authors and their work every weekday during June and July. It would be great if you could share. Thanks Sally.