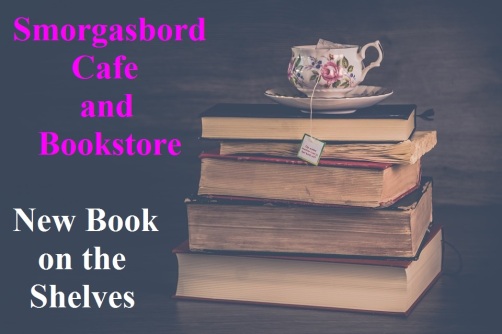 Delighted to showcase two new releases for authors in the Cafe and Bookstore today and the first is Teagan Riordain Geneviene with Hullaba Lulu: a Dieselpunk Adventure

Hullaba Lulu, a Dieselpunk Adventure is a wild and wooly 1920s fantasy story. Lulu, the heroine is inspired by the song, “Don’t Bring Lulu,” from 1925 ― so are her pals, Pearl and Rose. My Lulu loves to dance, and freely indulges in giggle water. She snores and burps and says whatever she wants. Lulu is a snarky but good-hearted flapper. The song’s inspiration stops there, but the story is just beginning.Travel with Lulu and her friends on a magical, dieselpunk train that belongs to the smolderingly handsome and enigmatic man known only as Valentino. They get into all sorts of trouble, usually due to Lulu’s clumsiness. It’s an intense ride through a number of pos-i-lutely creepy settings, including “sideways” versions of Atlantic City and the Cotton Club. At every stop and in between, Lulu ends up creating chaos. There’s no telling where they’ll end up. No, Lulu! Don’t touch that!Lulu’s the kind of smarty, breaks up every party,Hullabaloo loo, don’t bring Lulu,I’ll bring her myself!;

Head over to buy the book for only 99c: Amazon US –  And for 77p: Amazon UK- Rest of the World: Universal Link

A selection of other books by Teagan

A recent review for Ghost in the Kitchen

I’ve read a number of Geneviene books, and what I love about them is how light-hearted and whimsical they are, full of great characters, fantastical creatures, and quirky adventure. This one is no different. Pip and her grandmother have the ability to see ghosts and several show up in Granny’s kitchen, including a rather colorful Maestro who enjoys cooking. The story has mermen, cursed cowboy ghosts, and Daisy, Pip’s friend who died under mysterious circumstances. Pip and her friend Andy are determined to discover the truth.

This is a lively story with great characters and a lickety-split pace. Pip is a 1920’s flapper with an engaging personality, and the story is full of fun lingo. I haven’t read the first book in the series and though there are references to what occurred, this book worked fine as a stand-alone. A lighthearted, magical read

The next author with a new release is for bestselling crime author Sue Coletta and  Pretty Evil New England: True Stories of Violent Vixens and Murderous Matriarchs on Pre-Order until November 1st.

Female killers are often portrayed as caricatures: Black Widows, Angels of Death, or Femme Fatales. But the real stories of these women are much more complex. In Pretty Evil New England, true crime author Sue Coletta tells the story of these five women, from broken childhoods, to first brushes with death, and she examines the overwhelming urges that propelled these women to take the lives of a combined total of more than one-hundred innocent victims. The murders, investigations, trials, and ultimate verdicts will stun and surprise readers as they live vicariously through the killers and the would-be victims that lived to tell their stories.

Head over to pre-order the book for November 1st: Amazon US – And: Amazon UK

A selection of books by Sue  Coletta

A recent review for Hacked

Sherry Fundin 4.0 out of 5 stars Could this happen in real life?  Reviewed in the United States on June 3, 2020

Shawnee Daniels is an unforgettable character that lives by her own set of rules…so I wouldn’t recommend getting on her bad side. She is a forensic hacker extraordinaire, working for the police. She makes me think of Penelope Garcia on Criminal Minds. She is also a cat burglar, but we’re keeping that on the down low. I love a unique character and Shawnee fits the bill. Her BFF, Nadine, is quite the character in her own right. She is bubbly, effervescent and adds a lighter touch to the inherent danger that follows Shawnee around. I have wondered about this scenario in the real world and to see it play out in fiction is all too frightening. A quick reading novella that only whets my appetite for more.