Following on from The Colour of Life, my father-in-law Geoff Cronin wrote two more books with stories of life in Waterford and Dublin from the 1930s. He collected the stories on his travels, swapping them with others in return for his own and then treating us to the results of the exchange. Geoff also added some jokes overheard just for the Craic…Over the next few weeks I will be sharing selected stories from  Milestones Along the Way.

The Yards of Waterford.

In the 1930s the shops in Waterford City were dependent on farmers from the surrounding county for a considerable slice of trade, particularly at the weekends. Tradition was that a farmer and his wife would travel to town on a Saturday and as public transport was thin on the ground the pony and trap was the most common way of getting to the city.

At this point I must explain that well established pubs would have a yard with some stabling attached and a yard man would be in attendance, also many of these would be “bar and grocery” shops. So, having arrived in town the farmer could park his pony and trap in the care of the pub yard man, while he and his wife went up the main street – she to order bread for the week and to sell her eggs and home-made butter and he to visit the bank and the hardware shops, to order seeds and tools and the like. Instructions to the shopkeeper would be “send it to Dower’s yard, Grace’s Yard, Pender’s yard, Power’s yard”, or wherever the pony and trap was lodged. 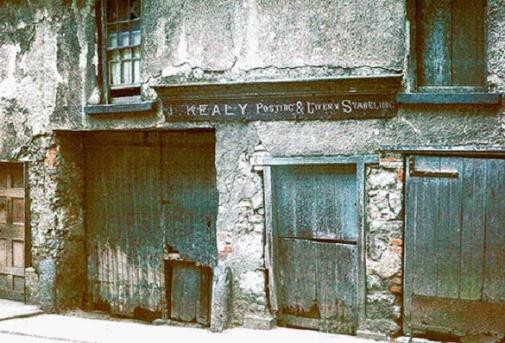 Now in those days no woman would be seen in a pub but in a ‘bar and grocery’ establishment there was always a ‘snug’ where a lady could be seated while giving her grocery order and waiting for her husband. And, what harm if a glass of port or a beer on a warm day, or even a whisky in the cold weather, was served in the process. And when himself would arrive he could join in with a pint of stout and chat for oftentimes there would be several ladies in waiting in the snug.

Serving behind the counter in my father’s bakery shop, I was quite familiar with the programme of the country people as we had a big proportion of our customers in that category.

There were great number of bars in Waterford and I often wondered why a pub should be called “A bar” until one day I noticed a very ornate, polished brass bar, elbow high across the window of a pub called the Dew Drop Inn in Greyfriars. After much research, I discovered that the origin of the “Window Bar” could be traced to a time when fairs and sales of cattle and horses took place in the street, or wherever there was a convenient square or open space.

On such occasions, the bar prevented large animals from leaning against the window and probably breaking it. The bar served another purpose too. When a patron of the pub who was the worse for wear was leaving the premises, he could grasp the bar and ease himself along the window and thereby make a dignified exit.

In recent times I spotted a not so decorative iron bar across the window of a very old pub in a narrow street in a small provincial town. But it was many a bygone year since a horse or a cow was sold in that street.

In the ’30s the horse was king of the road and you could see iron rings sunk into the street kerbs where a horse or donkey could be tethered while his owner went shopping. Also there was a huge variety of trades, related to the horse, blacksmiths, farriers, saddlers, feed stores, leather and harness makers, coach builders, coach painters, wheelwrights, tackle shops, stables, hay and straw merchants and even street sweepers. But gradually all these trades and the employment they provided disappeared with the demise of the horse drawn traffic and even the skills associated with those trades became largely extinct.

Horse racing and breeding still support some of the old trades and the now dying sport of fox hunting plays a part too, but it’s only a fraction of what used to exist. Such is progress.

Just for the Craic

In my father’s day there were many crusades against the demon drink, in fact there was a slogan popular with politicians of the time, “Ireland Sober, Ireland Free”. Hence it was no surprise when a company of evangelists appeared in local halls around the country, preaching about the evils of drink among other things. They were known variously as The Hot Gospellers, The Sankey Mudie Men and The Tin Chapel Men. Incidentally, men whose surnames were Sankey and Mudie were associated with this movement.

The modus-operandi was the same wherever they appeared. A local hall would be hired and leaflets advertising a free evening lecture distributed around the town and free tea and biscuits might even be suggested. So the hall would be peopled by a selection of layabouts, drunks and those who had nothing better to do and the meeting would begin with one of the preachers speaking about the evils of drink.

To illustrate the point he would hold up a glass of water in one hand and a common earth worm in the other and he would say “See what I hold in my hands, a glass of God’s own fresh water and a lowly earth worm. Now I drop the worm into the glass and you can see he swims about quite happily. But now I show you a glass of the demon whisky, I drop a worm into it and the unfortunate creature shrivels up and dies immediately. And now, my dear people, what lesson may we learn from this?”

He pauses dramatically, holding the glass containing the whisky and the now dead worm and a semi drunken voice from the audience says, “If you drink whisky you’ll never get worms”.

All I can say at this stage is, if it didn’t happen it should have!

A state of health

A man whose neighbour was recovering from a serious illness was asked by a friend how the man was doing and he replied,

“Well, sure he’s between the bed and the fire.”

I was born at tea time at number 12 John Street, Waterford on September 23rd 1923. My father was Richard Cronin and my mother was Claire Spencer of John Street Waterford. They were married in St John’s Church in 1919.

Things are moving so fast in this day and age – and people are so absorbed, and necessarily so, with here and now – that things of the past tend to get buried deeper and deeper. Also, people’s memories seem to be shorter now and they cannot remember the little things – day to day pictures which make up the larger canvas of life.

It seems to me that soon there may be little or no detailed knowledge of what life was really like in the 1930s in a town – sorry, I should have said City, in accordance with its ancient charter – like Waterford. So I shall attempt to provide some of these little cameos as much for the fun of telling as for the benefit of posterity.

I hope you have enjoyed this weeks stories from Geoff and I hope you will pop in again next Saturday. Thanks Sally.