By special request I am sharing Sam, A Shaggy Dog Story and I hope those of you who have not read his adventures will enjoy…

Last time we discovered Sam’s attempts at the Human language with varying success dependent on the food involved.

Chapters Nine and Ten – Other Pack Members and Respect your Elders

I considered Henry to be part of our pack despite being a cat. I also included the dog next door Danny, despite Sally trying to keep us apart.

Danny came to his new home and was allowed a level of freedom that is common in rural areas. He did not go for organised walks but was allowed to roam his two acres and the lane from a very early age.

These made him far more street wise than I was and also gave him access to the other gardens in the lane which did not necessarily make him very popular with the neighbours.
He would sneak in under the fence into our garden despite Sally spending vast sums of money “Danny proofing” our territory. She was afraid he would lead me astray and take me on one of his road trips. Whereas Danny was streetwise I was not and being a sheep dog, Sally worried that I might get too interested in the flock at the end of the lane and get shot by the farmer. One night I did actually crawl under the fence at his invitation and found myself in the dark, on the wrong side of the hedge.

I think Danny was having a laugh at my expense and was trying to teach me a lesson for my previous cowardice in not following him on one of his escapades. He disappeared into the darkness and through the back door of his house leaving me stranded.

Sally who had only turned her back for a minute while she fetched a flashlight was frantically calling for me on our side of the hedge and I barked to let her know where I was and that I was scared.

She came up our long drive and marched down the neighbour’s waving her torch and calling me. I had never experienced any form of mistreatment at her hands but I knew when she was not happy, and that this was one of those occasions. I hid behind the dustbins and heard her ring the doorbell.

When it was answered by the next door neighbour I heard a number of words that I did not understand only catching a few.

“Your damn dog has been over into our garden again and this time he has brought Sam back with him and now I can’t find him. Put your outside lights on so that I can find Sam and in future keep that dog of yours under control.”

It was more the tone that alerted me to the fact that Sally was angry and that I needed to please her immediately. I slunk out of cover and up to her where she attached me to my lead and walked firmly and quickly up the neighbour’s drive and into our own garden.

As we walked she only said two words repeatedly. “Bad Boy.” And although I could not see it I knew that she was wagging her finger at me. Tail between my legs I walked beside her and into our own house. I was upset that she was upset and sat down and offered my paw in penance. With that she leant down and hugged me tight.

“Sam don’t ever do that again, I was frantic with worry. I love you so much and couldn’t bear to lose you.”

Of course I did not understand all the words but I did appreciate the feelings that poured from her.

To this day I have never done anything like that again. I always know where both she and David are, and even though I may not be on a lead, I stay close enough at all times so that I can see them. Luckily my lead is 26 feet in length which means that I get the best of both worlds, room to roam on our walks but still in touch with them both. We were very lucky to have such a beautiful sandy beach and dunes on our doorstep in Ireland that provided plenty of safe walking and playing adventures.

I have to say though that Danny still used to come through the fence and we would play together in the long grass of the meadow behind our house. I reckoned as long as I stayed on my side of the fence within sight of the house I could still enjoy the friendship of this freedom loving dog. He told me of his adventures but after a while I realised that the lane and his garden was his entire world where as I travelled many miles in the car with my pack and visited many different places.

Eventually he got bored and frustrated hearing my tales of the world beyond the lane and stopped coming to play.

David and Sally had broken away from their own packs to form their own many years ago. However, unlike in my case, older former pack members retain a high status in their offspring’s circle and often visit. Siblings are also welcomed, although I have to say that when all the packs come together for an annual reunion, some of the younger members appear not to have learnt as much about pack protocol as I have.

Sorry, just an old dog talking and when I was younger I did enjoy the additional attention that I was given by small humans. I am afraid I have grown rather intolerant lately, and tend to find one of my favourite sleeping places hidden around the house when we have younger visitors.

Apart from immediate pack members there were also visitors from other packs that became very important in my life during the time David was in Madrid.

Sally’s mother was called Grand Mollie and I first met her when I was about six months old. At that time I was really only interested in my immediate needs but I stored away her smell and knew that she was part of Sally’s pack and therefore part of mine.

The next time she came to visit was when I was a year old at Christmas and this time I took my new job as head of security very seriously and guarded her at all times. I usually slept on the landing outside Sally and David’s room, but during Grand Mollie’s visit I camped outside her door, and escorted her to the bathroom during the night and always preceded her down the stairs etc.

Sally had given me strict instructions that I was to look after her and as her feet used to get very cold sometimes I took it upon myself to lie over them whenever she sat down.

She was very appreciative and of course whilst it had no bearing on my devotion to her, the odd sneaked snippet of cheese and sausage that she slipped me, only confirmed that she was a worthy member of the pack.

David’s father lived in Dublin and he would visit us out in the country. I went to his house once when I was still very young but unfortunately his head of security “Tuffy” was not going to allow some ‘wet behind the ears’ new pack member have the run of her territory inside the house or outside in the garden. She very quickly showed me who was the boss.

She backed me into a corner, sat and glared at me, daring me to move. Even though I was only a few months old, I was considerably bigger than she was, but I felt little inclination to cross teeth with her and I never visited again. I know that she was just doing her job and in her way she taught me that you have to respect other peoples territory and that you must be prepared to drop the ‘nice doggy’ persona for a slightly more resolute stance from time to time.

I have never bitten anyone although I have to say I have been tempted from time to time particularly at the vets. As I have got older I have become slightly less tolerant but have discovered that turning away and going and weeing as high up in a bush as possible is quite effective, particularly if confronted with one of the smaller breeds on a lead. If it is a larger dog, and he is off the lead, then I have determined that a dignified retreat to live and fight another day is by far the best approach. 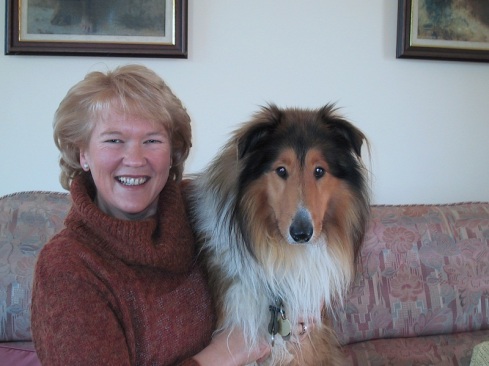 Sally Cronin waited until she began working for herself, and had the time to commit to the welfare of a dog. before she fulfilled a dream of having another Lassie Collie. From the moment that Sam came home at 8 weeks old they were inseparable, and travelled thousands of miles together and with her husband David, exploring Ireland, Wales, England and Europe. Finally they all ended up in a large house up a mountain to the north of Madrid.

Sam could charm the birds out of the trees and assumed that every human that he met was more interested in him than his humans that were tagging along. He developed a vocabulary and non-verbal clues as to his needs, cheese and sausages being the main ones.

They collaborated on this book, with Sam dictating his recollections and Sally correcting some of his more flamboyant claims pertaining to his adventures.

You can find out more about Sally’s books and their reviews: Sally’s Books and Recent Reviews

I hope you have enjoyed this chapter and will join us again next Sunday.. thanks Sally.

37 thoughts on “#Dogs – Sam, A Shaggy Dog Story – Chapter Nine – Other Pack Members and Respect your Elders by Sally Cronin”