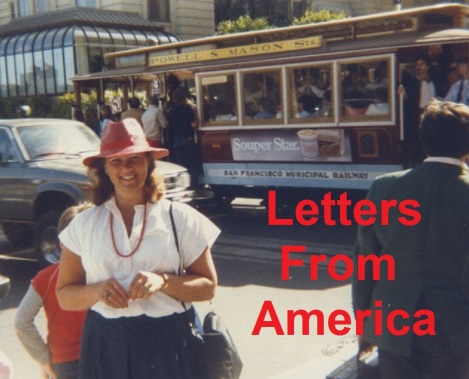 Welcome to the next post in the series Letters from America 1985 -1987 that I wrote home to my parents in the UK. My father kept them all in a folder and on his death they came back to me with a note to publish them.

This week one of my articles that I wrote and sent to the family about our first trip to New York.  I hope you enjoy the trip and the photographs I have managed to dig out.

Have a Nice Day… In the Big Apple

As with any flight the best part is reaching your destination. The final ten minutes of my flight from Houston was definitely spectacular, passing over the city of New York with its millions of lights that reminded me of a lady’s sequined evening dress. It was a slight anti-climax, to then have to wait for three hours in LaGuardia airport, for David who was flying in from Kansas, but I spent the time people watching, one of my favourite pastimes, and drinking airport coffee, which is not. 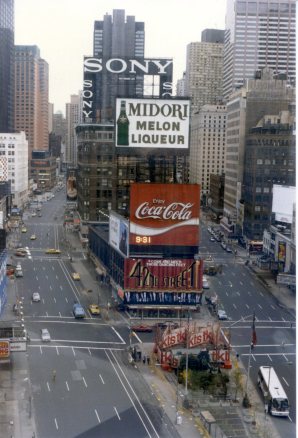 However, by 11p.m. we were on our way by taxi; through the city that never sleeps. It was a rather rapid transit, and slightly hair-raising experience, as I am sure our driver was a moonlighting Kamikazi pilot. We arrived at the brand new Marriott Marquis on Broadway with a flourish and a sigh of relief. In my teenage years, I did have aspirations to one day be a musical star and headline on Broadway… I fear this is the nearest I am going to get! We registered and retired to the bar for a much needed sedative.

The hotel is certainly impressive, from the outside it really looks like any other skyscraper in New York, but once inside you are greeted by the amazing sight of a forty-five storey atrium. A central column dominated the view, carrying brightly lit glass elevators; a ride to the top was not for those suffering from vertigo. 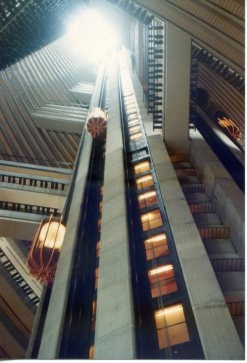 The revolving piano bar, which took you out over Broadway once an hour, was certainly the ideal place to start our first visit to the Big Apple… 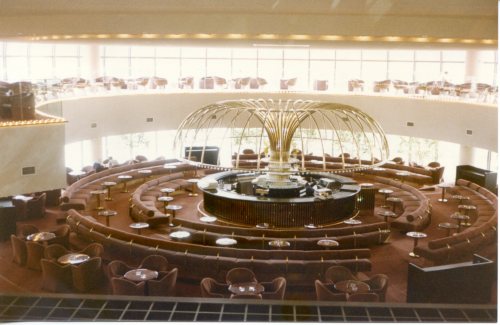 Of course, like any good New York tourists, we set out after breakfast the next morning, intent on seeing as much as possible of the city. Street life was quite a shock at first, and the traffic was horrendous. We were very pleased that we had decided not to hire a car for our stay, but our decision to use the Yellow Cabs was probably equally as hazardous! We walked to the Empire State Building and were duly impressed by both the building and the fantastic view over Manhattan. From ground level, the aspect is very much one of a concrete Grand Canyon, but from the top of the Empire State Building, you get the impression that you are looking down into Lilliput. 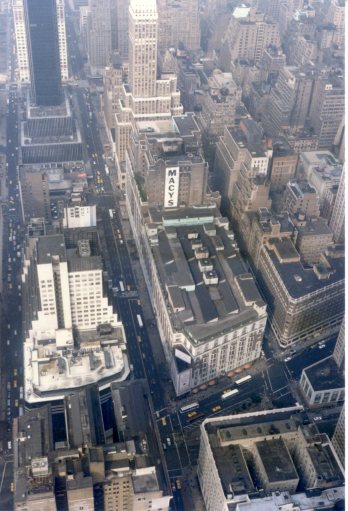 If you want to buy a camera, New York is certainly the place to buy one. There are camera shops on every block, but watch out for the salesmen. They are on commission only, and we saw several who dealt with time-wasters in a very abrupt way. Service with a smile was obviously not part of the deal, more service with a snarl. I have to say it rather took us by surprise as our experience so far had always been very different. We have had a fair amount of practice now at negotiating when buying expensive items and I don’t think we got rooked too badly, and we did try to do it in good humour!

Of course I did persuade David that I needed to visit the famous Macy’s, just to look you understand! 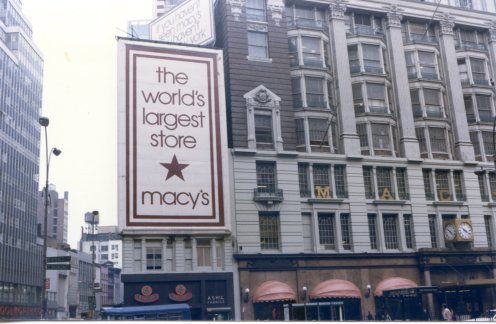 Saturday night is show night on Broadway, and after 3 p.m., half price tickets can be bought for the evening performances from a makeshift ticket office right in front of the Marriott. Unfortunately, the shows we were interested in, 42nd Street and Cats, were sold out. After consulting our guide books over a great coffee and salt beef sandwich, we decided on the French Revue and dinner at the Cafe Versailles. With its small stage and ornate decoration, it certainly gave you the impression of being in a Paris nightclub and the show was certainly entertaining. The showgirls of course were beautiful but the best part for me was a rather aged female impersonator who mimed to Madame Butterfly, while fortifying herself with every drug and drink under the sun, unusual but very funny. A quick revolve around the piano bar on our return to the hotel, ended a very tiring but fascinating day.

With out time being limited, we deposited our bags at the hotel and took a cab to the pier, where we embarked on a three hour river tour all around Manhattan. It was very good value for $12 each and I kept my new camera busy recording the truly impressive sights of the Statue of Liberty and the famous skyline. After the trip we treated ourselves to lunch in a small Italian cafe before returning to collect our luggage.

I am sorry that we didn’t have more time in New York, but I don’t think I could live there all the time. Stamina and nerves of steel are essential, and you know what? All those and films and cop stories you see on television about the Big Apple, they’re all true!

I hope that you have enjoyed this trip down memory lane… some photographs have got lost in the moves or packed away in the attic, but I was delighted to find this handful. Thanks Sally.