It is 20 years since I put pen to paper.. of fingers to the keyboard and wrote my novel Just an Odd Job Girl. I am delighted that it still gets the odd recent review, but I thought to celebrate the anniversary I would offer it FREE for the next few weeks. Particularly as I am in the middle of editing my next collection due out in November. 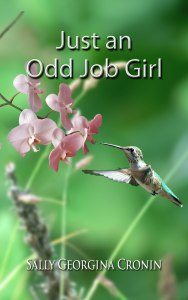 As an indie author on Amazon I don’t get to do free giveaways, so I would ask you to email me on sally.cronin@moyhill.com and let me know if you would like a Mobi for Kindle or an Epub version of the book for other devices. I promise I won’t share your email with anyone else. You can find out more about the book and its most recent review at the end of the post.

After a few unsuccessful attempts to keep our marriage together, my first husband and I finally split up. All our furniture and belongings were in storage, as our accommodation at the pub we ran was fully equipped. I headed off with two suitcases into a B&B for a few weeks and took some temporary jobs, as I looked for something more permanent. At the beginning of December, and now almost broke, I applied for the position of Housekeeper/Caterer at a public school in Sussex.

I went for the interview and my experience in steak house management, and also mass catering in the pub were very useful. Two days before Christmas I received a telegram asking me to report to the school on the 6th of January. My new living quarters were the ground floor of one of the farm cottages attached to the school, right opposite the pig sheds which infused my new home with an alluring aroma. The children were expected back on January 11th and my first job was to buy in the supplies to feed 120 children and 30 school and domestic staff.

I was lucky to walk into a brand new and purpose built dining hall and kitchen, which was a real bonus. I had one permanent assistant, and the housekeeping staff would also help at meal times. I spent the next few days ordering from the main dry goods supplier and local butcher and fish merchant. I also had to work out staffing rotas for the cleaning and maintenance of the residential areas of the main house and classrooms, which were my responsibility too. I planned the menus for the next four weeks so that I could buy certain foods in bulk which saved money. I also need to organise my own timetable, as I would be cooking four meals a day, seven days a week as well as checking on the housekeeping side twice a day. On Fridays one of my staff who had some cooking experience, would cook lunch, which to the delight of the children was always superb fish, chips and peas. That gave me some time to explore the local area and take a breather.

The children started the day with juice, cereal or porridge, and a cooked breakfast with a piece of toast with tea or milk. Let me tell you how daunting it is on your first day in the job to fry 150 eggs rotating through six large frying pans, watch flats with bacon in three ovens whilst toasting 150 slices of bread both sides, without burning, on two large wall-mounted grills which took 30 slices at a time. All dished up by 8.15 when juice, porridge or cereal was finished.

Table prefects would come and collect the serving platters and toast racks, allowing me to start my rounds of the dining-hall to make sure that each child ate all their breakfast. Twice a week, I would start half an hour earlier at 6a.m, so that I could crack 140 eggs into a giant Bain Marie to gently scramble. I would say the overall favourite breakfast was sausages and beans and fried bread, which disappeared in a heartbeat.

No sooner had the kitchen been cleaned and the crockery and cutlery sent through the washer, and it was time to do the lunch preparation. Even back then, I cooked food from scratch, instead of relying on the frozen entrees that were available for mass catering. The boys and handful of girls at the school soon became accustomed to eating Coq au Vin, Boeuf Bourguignon, Spaghetti Bolognaise, Lasagne as well as roast dinners with all the trimmings. There was always rice, potatoes or pasta and at least two vegetables. Dessert might be Apple Charlotte, Cherry Pie, Rhubarb Crumble, Spotted Dick all served with custard.

I did use frozen vegetables at times, but I did a deal with local farmers to take their odd shaped vegetables and fruit, and found a free range egg farmer who delivered stacks of eggs at the beginning of the week. Fresh fish was delivered every Friday to be coated in crispy batter with home-made chips.

Before I arrived all the main meals would be delivered to the tables in serving dishes and the table prefect would dish up. I was not sure that every child was eating a balanced diet so I changed the process. All the children would line up with a plate, and three of us would fill the plate with a portion of every item. Once they were all seated I would walk around the dining-room chatting to them and making sure that it was all being eaten.

There was short break in the afternoon as High Tea was served at 6pm, which might be beans on toast, egg or cheese and tomato sandwiches, homemade beef burgers, cake and a piece of fruit, with tea or a glass of milk.

Wednesday and Saturdays when we have visiting teams from neighbouring schools for cricket in the summer and rugby in the winter, there would be a games tea at 4.00pm. A variety of sandwiches and cake with milk or squash would keep them going until the official tea time.

My last cooking for the day was for the teaching staff which usually involved preparing a quiche and salad, risotto or chicken pie and potatoes and vegetables with fresh fruit salad. My working day finished at around 9.00p.m as the last plate went into the dishwasher.

Although during term time that was a heavy workload, over half-term and holidays I usually stayed in my cottage, and apart from making sure the housekeeping and grounds were maintained, I had plenty of time off. Most half-terms, a handful of children, whose parents lived abroad, stayed at school and we would go on outings and have picnics in the grounds. Meal times were much more relaxed and we would eat together with treats such as ice-cream.

I also had the company of Erin the goat, the school mascot who had the freedom of my garden every day. I would sit on a bench reading a book and he would pop over from time to time for a treat. On one occasion I had gone in to make a cup of tea and came back to find he had eaten half my book. The half I had not read yet!

There was not much time for a social life outside of school, but at the time, it was just what I needed to get back on my feet again. I became close friends with some of the live-in teaching staff and the matrons, and that too was something that eased the heartbreak I had been through.

It was a different time forty years ago in the public school system and despite some of the evidence that has come to light of ill-treatment or abuse I did not witness any of that. I have to say that every effort was made to feel that the children were living in a homely and warm environment. Most of the children thrived and for those who had just arrived and were feeling homesick, there were pancake making classes and they were appointed as pea and vegetables dispensers at lunchtime.

My time in the school and some of the characters I met there have been included in one of my books.

After 18 months, things were not going well on the divorce front, with some disturbing threats  being made, I decided to get as far away as possible. I applied for the job of senior receptionist in a luxury hotel in Mid-Wales in the Snowdonia National Park.

On Monday after 18 months in the Sussex countryside I travel to the far side of the UK to a hotel in Wales.

At 50 Imogen had been married for over 20 years, and was living in a big house, with money to spare. Suddenly she is traded-in for a younger model, a Fast-Tracker.

Devastated, she hides away and indulges in binge eating. But then, when hope is almost gone, she meets a new friend and makes a journey to her past that helps her move on to her future.

Feb 08, 2020 Pete Springer rated it Five stars it was amazing

Sally Cronin has written a delightful book with Just an Odd Job Girl. The central character, Imogen, is most likable and must return to the workforce after her husband, Peter, falls for a much younger woman. At age fifty, Imogen has not only lost her husband but faces the reality that she must find a job after more than two decades. What Imogen has going for her is a rich and varied employment history from when she first became employed at age fourteen.

What follows is extreme hilarity as Cronin skillfully recaps all of Imogen’s unexpected employment adventures. From chasing after shoplifters to unexpectedly filling in as a dental assistant when the regular hygenist faints, there are plenty of laughs. Every employment opportunity forces Imogen to acquire new skills with the most entertaining stint as a hotel assistant manager. Along the way, Imogen realizes that she can tackle any problem or situation that life throws her way. The ending is most satisfying, but I don’t want to spoil that for you.

To get your FREE copy of Just An Odd Job Girl for Kindle or in Epub please email me on sally.cronin@moyhill.com – your email will not be shared and whilst a review would be most welcome it is not expected.

Thanks for dropping in and more odd jobs on Monday and I hope you will join me then.. thanks Sally.