A wonderful Q & A between D.G. Kaye and her guest on Frinday Diane McGyver, talking about her novel Northern Survival.. apart from Debby’s usual terrific questions where we learn more about Diane’s inspirations for her stories and future plans, there is a wonderful excerpt for the book and definitely on my reading list.

Today I’m delighted to be featuring Canadian author Diane McGyver. Diane writes fantasy novels, and has recently started her Romance Collection, as she explains – not typical romance, but with themes of adventure, action, survival and awakenings that thread through her stories that take precedence over relationships.

Diane McGyver writes stories, some long, some short. Regardless of genre, each story contains a bit of adventure, romance, survival and humour. She loves writing stories with a fantastical theme, but her current release “Northern Survival” is all about surviving in the wilderness after a plane crash. She’s been writing a long time, and the journey has taught her to not squander words. Each new story is more concise with less clutter than the previous. McGyver: “Writing feeds my soul, fills my heart, keeps me wild and gives me freedom few other occupations can give. Why would I do anything else?”

Diana writes stories and articles and operates a publishing company based in mainland Nova Scotia. She’s written on many topics over the years, including genealogy, writing, publishing, gardening and history. Since 1997, a few thousand articles have appeared in dozens of publications, including Saltscapes Magazine, Plant and Garden Magazine, alive Magazine, East Coast Gardener and Canadian Gardening. 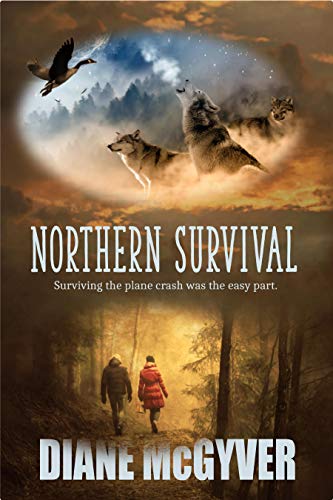 Olive Tweed planned her trip for two years. She’d vacation at Summer Beaver, gather the research material needed to write the next book and spend a few days hiking the vast wilderness. When she is called home unexpectedly and boards a chartered plane, she never dreamt it would crash, leaving her alone with a man who knew nothing about survival or the woods. If they don’t put aside their differences and work together, they’ll never escape alive.

Northern Survival was inspired by a video created by a pilot who recorded the crash of his small plane in Northern Quebec. The only reason he survived was because the plane had a parachute.

If you love stories of adventure, survival challenges and characters who test each others ability to endure, you’ll love Northern Survival.

Jacqui Murray VINE VOICE 5.0 out of 5 stars How to survive well-below-zero temps with little food, warmth, shelter, or medicine Reviewed in the United States on September 13, 2020

In Northern Survival (Quarter Castle Publishing 2020), two strangers–Olive, a writer researching an upcoming book and and Johnathan, a movie star–are returning to civilization aboard a small plane when a large bird slams into the windshield and crashes the plane. Everyone is killed except Olive and Johnathan and they are stranded in the middle of the frozen Canadian forests. Conventional wisdom says to stay with the plane but nearby hungry wolves convince them they must leave. They have little food, minimal shelter, and no weapons, and both think they know the right way to hike out of the desolate wilderness. That’s their first disagreement but by no means their last.

“I can do this.” “I know you can, but you can’t do it like I can because you’re a pampered city boy with no damn experience.” “Leave me alone [rephrased].”

Olive has some survival skills while Johnathan has none so she wins. Still, it is a daunting task that leaves them often weak, hungry, thirsty, cold, and frightened. As a reader, I’m left thinking it is only because of Olive’s brutal honesty that they even have a chance:

“I don’t expect you to do what I do, but I expect you to tell me your limits so we don’t exceed them and cause unnecessary injuries, which ultimately will slow us down or…”

A good read with lots of how-to information if you ever find yourself stranded in below-zero weather with nothing but trees around you.

Head over to enjoy the interview and the excerpt for the book.. with buy links direct to your nearest Amazon...Q & A With D.G. Kaye – Featuring Diane McGyver – Northern Survival

Thanks for dropping in today and I hope you will head over to read Debby’s post in full.. thanks Sally.