In Part Four of this series we looked at the 1990s and the films and music from that decade.This week brings the series into this new millennium as Barbra Streisand continued to entertain and delight her fans. 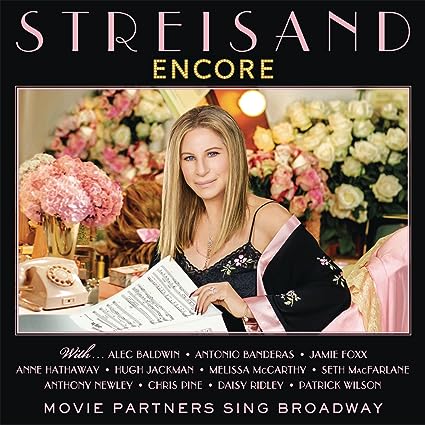 In February 2006, Streisand recorded the song “Smile” with Tony Bennett at Streisand’s home in Malibu. The song is included on Bennett’s 80th birthday album, “Duets.” They filmed a live performance of the song for a special entitled “Tony Bennett: An American Classic. The special aired on NBC November 21, 2006, and was released on DVD the same day. Streisand’s duet with Bennett opened the special.

“Smile” was originally the theme of an instrumental used in the soundtrack for the film “Modern Times” by Chaplin, in 1936. The music was composed by Chaplin and inspired by Puccini’s Tosca. John Turner and Geoffrey Parsons added the lyrics and the title in 1954. Nat King Cole recorded the first version with lyrics and the rest is history. Barbra Streisand and Tony Bennett do a fabulous cover of this great American classic. Enjoy.

Following the special with Tony Bennett, Barbra Streisand announced a tour which included the classical group Il Divo. She intended to raise both money and awareness for a number of charities that she supported. To date The Streisand Foundation has raised over 7 million in profits (2018 figures) to these charities which still occupy much of her time and efforts. Streisand: The Tour, over the 20 concerts, set box-office records grossing over 92 million with profits distributed through the foundation.

In “I Still Can See Your Face” Streisand’s tremendous vocal blend with Andrea Bocelli is outstanding and spine tingling. This duet is taken from the 2014 album “Partners,” with an all male lineup. “Partners” topped the Billboard 200 in the first week of its release, making Streisand the only recording artist to have a number-one album in the 1960s, 1970s, 1980s, 1990s, 2000s, and 2010s. It was also certified gold in November 2014 and platinum in January 2015, thus becoming Streisand’s 52nd gold and 31st Platinum album, more than any other female artist in history.

This musical powerhouse has produced some incredible statistics. Apart from producing dozens of gold and platinum selling albums she is second in the all-time charts ahead of the iconic Beatles and The Rolling Stones and only bettered by the King.. Elvis Presley.

Apart from selling around 250 million records worldwide, she is the only artist to have earned awards from all the major award institutions, including two Academy Awards, one Tony Award, five Emmys, 10 Grammys, 13 Golden Globes, a CableACE Award, the University of Georgia’s George Foster Peabody Award and the American Film Institutes’s Lifetime Achievement Award. In 2015, she was further honored as a recipient of the Presidential Medal of Freedom.

Streisand has been nominated 43 times for a Grammy Award, winning eight. In addition, she has received two special non-competitive awards; the 1992 Grammy Legend Award and the 1994 Grammy Lifetime Achievement Award. She has also been inducted into the Grammy Hall of Fame four times. In 2011, she was honored as MusiCares Persono of the Year by the Grammy Foundation for her artistic achievement in the music industry.

In a last performance for the series, a wonderful duet between Barbra Streisand and Celine Dion.

“Tell Him” was the first single from Dion’s “Let’s Talk About Love” and Streisand’s “Higher Ground” albums. This duet was rejected by non-adult contemporary radio stations. Sony Music Entertainment canceled the U.S. single release, because it did not have a broad enough support to put the song on top of the charts. The song did manage to peak at number five on the Adult Contemporary and number 58 on the Radio Songs charts. However, “Tell Him” was a huge hit outside the US and was, nonetheless, nominated for a Grammy Award for Best Pop Collaboration with Vocals in 1998. Uploaded CelineDion