Welcome to the Christmas Book Fair where I will be sharing authors with their recent reviews or new releases. Books make great gifts for Christmas and I hope you enjoy today’s selection.

The first author today is Jean Lee with her latest release the second book in the fantasy series, Fallen Princeborn: Chosen

CHARLOTTE’S FAMILY MAY NO LONGER REMEMBER HER NAME, BUT HER ENEMIES WILL NEVER FORGET.

Charlotte just wanted to start a new life with her sister Anna out of the reaches of their abusive uncle. When their journey led to Anna’s disappearance from human memory, Charlotte hunted for her sister and the mysterious creatures that took her behind an ancient Wall that hid a land of magic the world had long forgotten. Charlotte woke the Princeborn Liam Artair, and with his return the conflict between factions of the magical Velidevour turned cursed and deadly.

Now Charlotte must end this conflict before the land of River Vine and the inhabitants she’s befriended are consumed by Orna, Lady of the Pits, who is still very, very eager to see her beloved return. And Orna is not the only one who wants hold of the Princeborn Liam’s heart. These Velidevour come armed with firey wings, crimson claws, and pale fire, and like dead magic, they know no kindness.

The Bloody Days are soon returning, and they will not end until a choice is made, a choice that could tear the heart of River Vine apart.

Fallen Princeborn: Chosen is a direct continuation of Fallen Princeborn: Stolen. Recommended for fans of Neil Gaiman’s Stardust, Brigid Kemmerer’s A Curse So Dark and Lonely, and Sarah J. Maas’ A Court of Mist and Fury.

Squeaky Joe VINE VOICE 5.0 out of 5 stars A delight to read  Reviewed in the United Kingdom on 8 November 2020

Continuing her quest, Charlotte strives to end the conflict between opposing sides of the magical Velidevour, before the land of River Vine and its inhabitants are consumed by Orna, Lady of the Pits. Unfortunately, Orna is not the only one who wants hold of the Princeborn Liam’s heart. Can Charlotte keep Liam safe while battling the evil forces that threaten him?

‘Fallen Princeborn: Chosen’ continues on from the first book, ‘Fallen Princeborn: Stolen’, being a series of YA dark-fantasy novels. Though I’m not keen on long retellings of what happened in previous books, I did find it a little confusing trying to recall who everyone was, so a little bit of back story here and there would’ve helped enormously. As I’ve said before, I’m not a big fan of the genre, but Ms Lee has a particular way with language that makes it a delight to read. Her prose is rich and colourful, and her world-building skills are never perfunctory or half-baked (as with some fantasy authors). The characters are thoughtful and fully formed, with their own individual traits and quirks. Though I did get a little confused (again) with the variety of personalities, the story starts with a bang and rattles along nonstop thereafter. With plenty of action, weird monsters and shapeshifters, there’s lots here to keep fantasy fans happy for hours.

It’s worth noting that while this can be read as a standalone, I’d recommend reading the previous book first to avoid confusion.

Read the reviews and buy the book: Amazon US –  And: Amazon UK

The next authors with a recent review are Sue Vincent and Stuart France for their book, metaphysical fiction, The Initiate 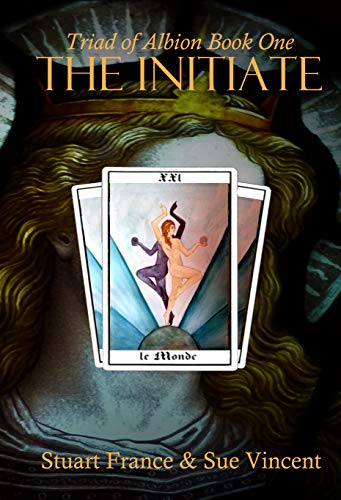 Don and Wen, two founding members of a new Esoteric School, meet to explore an ancient sacred site, as a prelude to the School’s opening event. The new School is based upon a psychological, nine-fold, system and operates under the aegis of the Hawk of Horus.

The trip does not unfold as planned.

Instead, Don and Wen, apparently guided by a plethora of birds, embark upon a journey that will lead them through a maze of spiritual symbolism, to magical mysteries and the elusive figure of the ‘Ninth Knight’.

The Initiate is the story of a journey beyond the realms of our accustomed normality.

It is a true story told in a fictional manner.

In just such a way did the Bards of old hide in the legends and deeds of folk heroes, the deeper truths of existence for those ‘with eyes to see and ears to hear’.

As the veils thin and waver, time shifts and the present is peopled with shadowy figures of the past, weaving their tales through a quest for understanding and opening wide the doors of perception.

GraemeCumming 5.0 out of 5 stars The Initiate Is You  Reviewed in the United Kingdom on 17 November 2020

At the risk of invalidating this review, I am going to open up by saying that I’ve met the authors on several occasions, each time with the anticipation of an adventure, followed by the knowledge that I’ve been educated. That education has been as a result of trips they’ve taken me on, going off the beaten track to explore caves, woods and stone circles, as well as stopping off at churches to learn more of the symbolism in them.

This is relevant, because it does skew my view of The Initiate. Not because I want to big up a book that’s poorly written. It isn’t. It’s very well written. But I know the content won’t appeal to everyone. There’s a possibility it wouldn’t have had the same appeal for me a few years ago. But, having been out there with them, discovering not only new things, but learning their history and the different interpretations of their meaning, the book served to remind me of those adventures, as well as opening up more ideas and meanings.

Because of my own experience of the book, I inevitably give it five stars. In truth, I may even have given it that if it had been less well written, but I don’t need to compromise there. Using a narrative thread and fictional versions of the authors, it tells a story, and uses that device to enlighten the reader. It’s not a unique approach, but it works especially well here.

For readers who are interested in concepts involving nature and supernature, as well as delving into areas that might be considered pagan, this is an easy to read introduction. The initiate of the title is the narrator, but it could just as easily be you.

A small selection of books by Sue Vincent and Stuart France.

The next author with a recent review is D. Wallace Peach for the latest book in her most recent series. Lords of Chaos (Unraveling the Veil Book 3)

In this thrilling conclusion to the Unraveling the Veil series, tensions mount and war looms.

After saving the changeling queen from a savage death, a second sworn oath sends Naj, Alue, and Talin to the mine where the first disappearances set the wheels of anarchy in motion. But it’s not the renders of Kalann il Drakk, the First of Chaos, who confront them in the blackness of the collapsed tunnels. It’s another foe, no less deadly.

When brutality strikes in the stone cells of the Authority, accusations and blame splinter trust. Once again, the fragile threads of loyalty that once bound the companions together on an impossible mission fray. The alliance finally breaks.

Naj, a goblin mage and traitor, returns to Jad’ra, determined to defend his home. With nothing to lose, Talin retreats to the changelings’ jungle to find his queen a stranger and his city on the verge of burning. Alue journeys to the Riverlands on a hopeless quest to enlist the aid of the elfin king.

All the while, the First of Chaos gloats. For only as allies will his three adversaries prevail. Above the hall of the First, his brethren, the Veil vanishes before the truth. The hordes of chaos descend on the known land, and the final battle begins.

D.L. Finn 5.0 out of 5 stars I highly recommend this fantasy series!  Reviewed in the United States on November 20, 2020

“Lords of Chaos” is the last book in the Unraveling the Veil Series. It starts up where the last book left off. The beginning was brutal when Talin is in prison. It felt very real and equally disturbing what one being can do to another. The trio of changeling, elf, and goblin fights the destruction of their world while societies were still fighting each other. There was a lot of depth and insight into our current social situations, which are weaved into the story seamlessly. The Lord of Chaos wants to end what Alue, Naj, and Talin are trying to save. I love the relationship between Talin and Alue and how Naj fits into it. They have all grown, changed, and learned not only about themselves but about the world around them. This is a fast-paced action tale where they are constantly fighting to survive, and the story and characters are riveting. This will be a series I won’t soon forget as it leaves a message to work together instead of fighting each other. Very timely. I highly recommend this fantasy series that was entertaining and thought-provoking.

Read the reviews and buy the books:  Amazon US – And : Amazon UK – Follow Diana: Goodreads – blog: Myths of the Mirror – Twitter: @Dwallacepeach

A book for anyone who has ever been eleven years old.

Erin Fitzwilliam-Beaumont hates her friendless life at secondary school until a mysterious app brings Carys Bowen into her life. The new friends are struggling to face their own demons when a surprise announcement from Carys brings a remarkable new dimension to the girls’ already unconventional friendship.

Will Carys help Erin find the fresh start she desperately needs, and can Erin help Carys restore her crumbling relationship with her father?

Helen Warburton 5.0 out of 5 stars Intriguing mystery  Reviewed in the United Kingdom on 7 November 2020

This is another page turner from Sian Turner (pardon the pun). It explores human relationships and isolation in the context of a compelling storyline which keeps you on your toes right to the last chapter, with a surprising twist. An insightful, absorbing and thought-provoking read, and an ideal stimulus away from lockdown and winter nights!

Thanks for dropping in today and I hope you are leaving with some gifts to share…thanks Sally.