Welcome to the Christmas Book Fair where I will be featuring all the authors currently on the shelves of the Cafe and Bookstore. 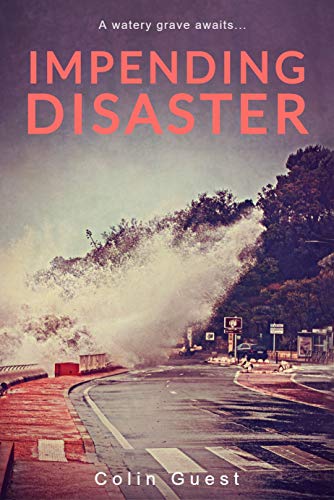 When friends Ian, Mark and Jane survive a horrific helicopter crash, they have no idea that their troubles are far from over.

Badly injured and making their way down the mountain to safety, they discover the lake has swollen to horrific proportions and the dam is about burst. For the people who live nearby, this means almost certain death.

Ian rushes towards the town, but it’s a race against time to warn them all and evacuate before they’re enveloped by the huge tidal wave. Will he make it in time?

A short but exciting story. A group of three friends have suffered a severe aviation accident that leaves them injured in the middle of the mountain, but they will soon realize that this disaster is nothing compared to the one that lies ahead.  A lagoon has formed at the top of the mountain that is about to collapse. If they do not arrive in time to notify the people living on the slopes, a huge wave of water, rocks and mud will claim the lives of everyone.

The next author today is Jude Lennon who is also a children’s author whose books are in that cafe and bookstore too. This is her short story collection for adults. A Slice of Lemon.

In this collection of short stories, you’ll meet a range of characters embarking on adventures of self-discovery, healing, resolution, intrigue and mystery. The settings are as diverse as the themes, tempting you into rugged landscapes, ancient castles, beautiful beaches and an icy wilderness. If you’re looking for a book that will make you laugh, cry, escape and reflect in equal measure, you’ve found it. Over the years, many people have asked when I was going to publish something for adults so the answer is – now! So, if you are about to sit down and enjoy a well-earned gin or other beverage of choice – A Slice of Lennon is the perfect accompaniment.

This collection of short stories was inspired by the writing group I’m part of. We meet every month to share our work and to give and receive feedback. There is always tea and cake consumption and sometimes even the odd glass of wine. We’ve used many things to kickstart our writing including photographs, quotes, poems, album covers and random objects. Many, but not all of the stories in this collection have started life following a writing prompt from this group. Although most of the books I’ve written to date are picture books for children being part of this group has allowed my writing pen to wander into the territory of the grown-up audience. I’ve thoroughly enjoyed the process. Like the writing prompts themselves, this collection is varied in content and theme and I hope I’ve captured a wide range of human emotions.

Gemma O 5.0 out of 5 stars A Brilliant and Beautiful Collection of Short Stories  Reviewed in the United Kingdom on 4 July 2020

A brilliant and beautiful collection of short stories for adults. Jude Lennon has put together a real treat for those who like a quick pick me up book to read. My favourite was Civilised Outrage as that short story is set in Amsterdam by the Anne Frank museum. Amaterdam is one of my most favourite places I have visited.

Read the reviews and buy the book: Amazon UK —And: Amazon US

A selection of Jude’s children’s books

The next author is Susanne Leist with a recent review for her latest book released in July 2020  Dead at Heart: Book Three of The Dead Game Series

William’s bite bonded Shana to him, but he didn’t ask her to mate with him for life. She isn’t ready for a lifetime commitment. Now, William excludes her from his vampire meetings. Shana understands he’s an original vampire with immense powers. For them to be a couple, he has to treat as an equal partner. If William doesn’t respect her, then what are their chances of finding happiness?

Shana speaks to Linda, her best friend, of her fears.

“Paradise is an illusion.” Shana’s face grows heated as her frustration mounts. “Oasis is a haven for vampires. I’m tired of their battles. The Watchers get rid of an evil group of vamps, and another group arrives and attacks. It’s a vicious cycle. Vampires are trouble.”

“We will have a happy ending.” Linda lifts her head. “Don’t lose faith. The Watchers will protect us, and Gregg has an elite force of original vampires.” She touches Shana’s arm. “William loves you; he won’t let something happen to you.”

“The vampires keep secrets from us.” Shana swallows the lump in her throat. “I don’t want to live with vamps anymore, and I need time to decide on my relationship with William. One minute, I’m suffocating, and then the next, I’m lost without him.”

As a new enemy descends on Oasis, Florida, Shana turns to Sheriff Sam, who broke her heart. Can she trust the human-vampire?

This begins Shana’s journey to fight vampires and werewolves with Sam at her side.

An explosion at Chateau Frontenac in Quebec doesn’t stop Shana and her friends from saving their town, and maybe even the world.

1DreamReader 5.0 out of 5 stars A Talented Writer and a Unique Storyteller!  Reviewed in the United States on October 2, 2020

The Dead At Heart is the third book in the Dead Game Series, and proves Susanne Leist is a talented writer and unique storyteller. I often read paranormal books, I must say This book held my interest and never let go, until the last page. And honestly that last page did not let go as it left me wanting to read more about the characters.

The twist and turns are amazing, and as in the previous books, you become attached to the uniquely interesting characters. Leist offers readers vivid descriptions of scenery making you feel as though you are alongside her characters. I’ve been a paranormal reader, so I give kudos to the author for drawing me into this novel.

This book is fraught with tension and fear and love and friendship. The friends all worry what each other will think and if they can still be friends. You get to read about the fascinating transformations. That is another thing that is so nice about these book, you are not left wondering how or why, you are given explanations on how these beings can live in our real world.

Susanne’s Imagination is completely off the charts. I guess the bottom line is that I loved this book and the characters.

Time now for a book for dog lovers… the memoir.  My Name is Danny – Tales from Danny the Dog, edited by his best friend Andrew Joyce.

Danny the Dog is a prolific writer. He’s written articles for bloggers around the world and has his own very popular blog where he dispenses his wisdom on a monthly basis. He’s humorous, clever, charming, delightful, and sometimes irascible. Or, as he would phrase it, “I’m a purveyor of wit, wisdom, and words.”In My Name Is Danny, Danny writes about his real-life adventures living on a boat in Fort Lauderdale, Florida, with his human, Andrew. He tells of their trials and tribulations … and the love they have for one another. Fans of The Art of Racing in the Rain by Garth Stein and A Big Little Life by Dean Koontz will enjoy this book.

John W. Howell VINE VOICE 5.0 out of 5 stars An Enjoyable Read About a Man and His Dog From the Dog’s Perspective.  Reviewed in the United States on October 29, 2020

Danny was a real dog and writer. He was a frequent contributor to several blogs and detailed his life and the challenges of putting up with his owner, author Andrew Joyce. If you like dogs, you will love this book. Danny tells it like it is. He does not hold back on any subject and frequently delves into the philosophical side by tackling matters that plague us all.

His subjects range from Andrew’s choice of women to locating the next meal. It is interesting to note that Danny and Andrew had been together for over thirteen years, and it appears that Danny tried his best to train Andrew. The reader can witness in the book that very little training stuck.

This book is filled with delightful stories of Danny and Andrew’s relationship and is an entertaining read.

A selection of books by Andrew Joyce

When the effects of a hypnosis inducing drug fade, April slowly begins a conscious awakening. Memories of her past are unclear and she has no recollection of her identity or her whereabouts.

As the days slip by, April realizes there is more to life than existing when she is introduced to an occupant who does just that—her sister. The more she learns about her environment the more she wants to escape.

Will April remember her past, her sister? Will she have the courage to leave? And if she does, where will she go?

Experience through April’s eyes her struggle to remember and her determination to escape in this sci-fi, post-apocalyptic, suspense story.

C. Morgan 5.0 out of 5 stars An Inescapably Claustrophobic, Diabolically Mind-spinning Ride!  Reviewed in the United States on October 4, 2020

Lead character, A2, is in a facility called C.E.C.I.L: the Contagion Eradication Center for Intelligent Life. There is a man named Jasper there, who provides and controls everything, including the drugs she is being pumped full of, because ….because….she doesn’t know why. Danger and mystery meld with confusion and hazy memories of a life she only barely recalls. A2 meets B2, and they discover they were sisters, before….before whatever happened that brought them here….whereever they are, though neither know why.

Jackson’s first book in the Escape Series, Playing in the Rain: When All That Matters is Freedom pulls you right into the story from page one, slowly yet inexorably, leaving you as dazed and confused as A2. Page after deliciously-mystifying page, you follow A2 and B2 as their situation goes from bad to worse, yet gets better and better. If you love immersing yourself into a story body and soul, where you can end up exhausted from the remarkable confusion the author maintains chapter after chapter, dragging you and her characters along an unforseen path to an undisclosed conclusion while spinning in a web of intrigue that will leave everyone ensnared and gasping for breath, then prepare yourself. This one will not disappoint you.

It will not give up its secrets quickly or easily, either. Settle in and prepare for the inescapably claustrophobic, diabolically mind-spinning ride of your life!

Thanks for dropping in today and I hope that you are leaving with some gifts to share.. thanks Sally.