In early 1965 a film was released in the UK that was to be a turning point for me and the start of a lifelong crush on the lead actor. Christopher Plummer was 36 at the time that The Sound of Music became available to the general public and not just musical theatre goers. I was just twelve but I saw myself as Maria from that moment on. I saw that film three times in the next 18 months and I could rattle all the songs off at a drop of hat including The Lonely Goatherd with requisite yodelling.

My ardour did not diminish, and when we returned to Portsmouth in 1967, I managed to coerce a school friend into forming a double act. At age 14 we were encouraged to reach out to the community at Christmas, and undaunted by the prospect of performing publicly, my friend and I dressed ourselves in replicas of the film costumes. Actually my mother was missing a pair of old curtains, so we did not stray too far from the script…and we offered our services to three old people’s homes in the local area.

We would turn up after school in the weeks before Christmas and join the residents for a cup of tea and a piece of cake before performing our repertoire of songs from The Sound of Music. I must admit that a couple of songs in and there was a fair bit of nodding off…not to be outdone I would burst into The Lonely Goatherd and it served to enliven the audience who would look around bemusedly at the sound of a strangled cat in between the verses.

I did however have a ‘moment’ in my early 40’s. We were on holiday in the French Alps one summer and had hiked up one of the surrounding mountains. We reached a plateau that was dotted with alpine flowers and after we had consumed our packed lunch and with no one else in sight, I took my chance. I stood in the middle of the meadow and gave the title song as loud a rendition as I possibly could. I threw my arms wide as I finished and turned in a slow circle to receive the applause of my husband, only to find that a large group of Japanese tourists had just reached the edge of the plateau and were snapping photographs and clapping madly…I think they thought that it was especially laid on for their lunchtime entertainment. A quick descent was called for in the opposite direction.

I was lucky not to be arrested for disturbing the peace! 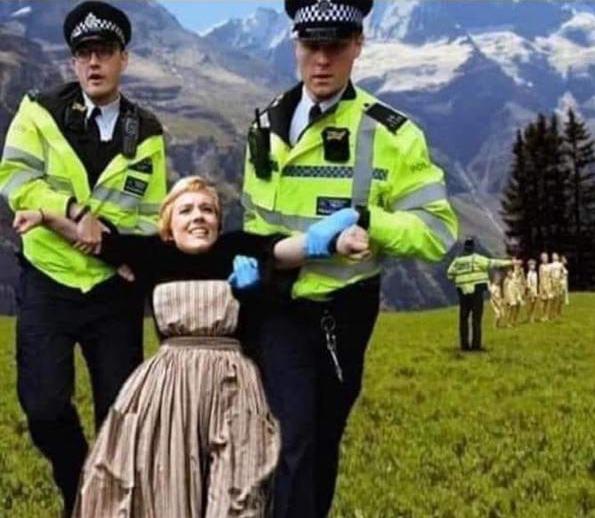 It would not be Christmas without sharing our very own music maestro and his tribute to the season  William Price King with The Christmas Song.

The Sixth day (30th December) is dedicated to St Egwin of Worcester. Egwin was of noble if not royal blood and was born in the late 600’s and became a monk. Because of his lineage the royal court and hierarchy in the church pushed for his elevation to Bishop in in 693. He had strict moral code and was a benefactor for the poor and orphans. He was also very strict with worshippers and clergy alike and became increasingly unpopular when he began insisting that marriage vows should be taken seriously and that the clergy should be celibate… In the end tired of the resistance to his firm stance on these issues he took himself off to Rome to get the blessing of the Pope.

A number of ‘miracles’ occurred on the route and having received vindication from the Holy Father he returned to Evesham. He lived until between 917 and 920 bringing about many changes including founding Evesham Abbey which was one of the most important Benedictine Monasteries of medieval times. He died and was buried there but all was destroyed in the purges in the 16th century.

Six geese a laying – some say this symbolises the six days of creation but most assume it was a continuation in the bird theme from the Four Colley Birds, Three French Hens, Two Turtle Doves and a Partridge in a Pear Tree…..

At this time of year we remember those that we lost and who will not be with us as we celebrate a family holiday. This haunting song by Sarah McLachlin always brings those I have lost to mind. In the Arms of an Angel. Sarah has a beautiful Christmas album Amazon US

Christmas Dinner has many popular courses, and it is likely these days that family members or friends who are coming to your home are vegetarian.. Carol Taylor has created an amazing menu for those who prefer to not have meat or poultry and I recommend that you head over to bookmark the lovely recipes that she has prepared: Vegetarian Christmas Menu

Now time for something to drink…..Whilst it is customary to see cranberries in a sauce on the Christmas Dinner Table, you can also enjoy in a cocktail during the holiday period. Cranberries have a great many health benefits…. which might be slightly diluted when adding alcohol.. but here is a video that will give you a recipe to try.

Thank you for dropping in today and I hope you have enjoyed the post, as always I would love to hear from you.. thanks Sally.