Unfortunately with social distancing, this flash mob from 2010 will not be repeated this year.. but thank goodness for YouTube.

After my time temping at the insurance agency which had been  an interesting experience of time management it was good pay and with still two weeks to Christmas I was keen to keep the money coming in. The temp agency contacted me and asked me if I would accept a two week contract that had been turned down by some of their regular temps due to the nature of the work.

It was for a receptionist/secretary at a large local funeral directors. Obviously many temps felt that at this festive time of year there might be little cheer to be had in such an establishment…. To be honest I was happy to have another two weeks work and on the Monday morning I turned up suitably attired in my most sombre outfit and rang the bell. A very nice lady showed me the ropes and gave me the guided tour of the public areas, explaining that only those involved in the actual process of preparing the deceased were allowed into certain areas. That was quite comforting I can tell you.

I had little contact with the public for the first couple of days as I settled into the routine but dealt with several enquiries by phone. The firm was an old established company and the two directors were brothers if I remember rightly. Eventually, after I had been properly versed on the etiquette involved, I was allowed to meet the general public. Of course the majority of these people were loved ones and family of those who had entered the building by the rear entrance.

This was my first real contact with the process of dying and I was heartened by the approach by all the members of staff publicly and privately behind the scenes. It was absolutely essential at all times to show respect for the deceased and their families, and I must say, I did find it hard at first to be natural but also sympathetic, with those that came to pay their last respects.

The other rule was to keep visiting families separate, and to this end there were two waiting rooms, and appointments made so that there were no log jams or queues. I would also escort the visitors out after the viewing and confirm final arrangements with them. This required a level of delicacy that was great training for me for jobs that I went onto in later years, and I actually enjoyed that part of the process where I felt I could help these grieving people.

At the end of the two weeks it was Christmas Eve, and since there would not be any funerals over the Christmas week, all the staff gathered in the office for sherry and mince pies. Everyone was very friendly and I had honestly enjoyed my time there. In fact they were happy too, and one of the directors asked if I would like to stay on full-time. I actually was considering this carefully during the party. I loved my job in Wales but Portsmouth was my home and I had missed my own family and friends. However, whilst pondering my future the doorbell rang and I offered to answer it.

I opened the door to find a tiny old man with a walking stick standing on the door step in the lightly falling snow. He had tears running down his face, and as I ushered him in he took my hand and simply said “Can you bury my dear wife for me love”. Luckily one of the directors had come through and stepped in to take the old man through to a waiting room. I was in bits and after composing myself in the ladies I gave my apologies and said that I would not be accepting their kind offer….

And if I had accepted their offer then I would have never have met my husband in Wales later in 1980!

But I remembered their kindness and over the years they took care of the funeral arrangements of my father first and then my mother in 2012. They will probably take care of me too when it is my time, as they have maintained their excellent level of respect and service to this day 40 years later. Which just goes to prove that good customer service is important to both the living and the dead.

Now for the amazing Leona Lewis with One More Sleep and lots more to enjoy on Leona’s official channel. leonalewis

The Ninth Day of Christmas (2nd of January) is a celebration of the life and times of St. Basil the Great and St. Gregory Nazianzen who with Gregory of Nyssa are referred to as the Cappadocian Fathers. Also known as Basil of Caesarea he was a Greek bishop in around 330AD in what is now modern day Turkey. As well as being a leading theologian of his time bringing together different factions within the Christian Church he is also revered for his work with the poor and underprivileged. He also set the guidelines for those entering the monastic life including community, work and prayer requirements. He is regarded as a saint in both Eastern and Western Christian philosophies.

The Cappadocian Fathers as a group advanced the development of early Christian theology, for example the doctrine of the Trinity and are highly respected as saints in both Western and Eastern churches.

The Twelve Days of Christmas 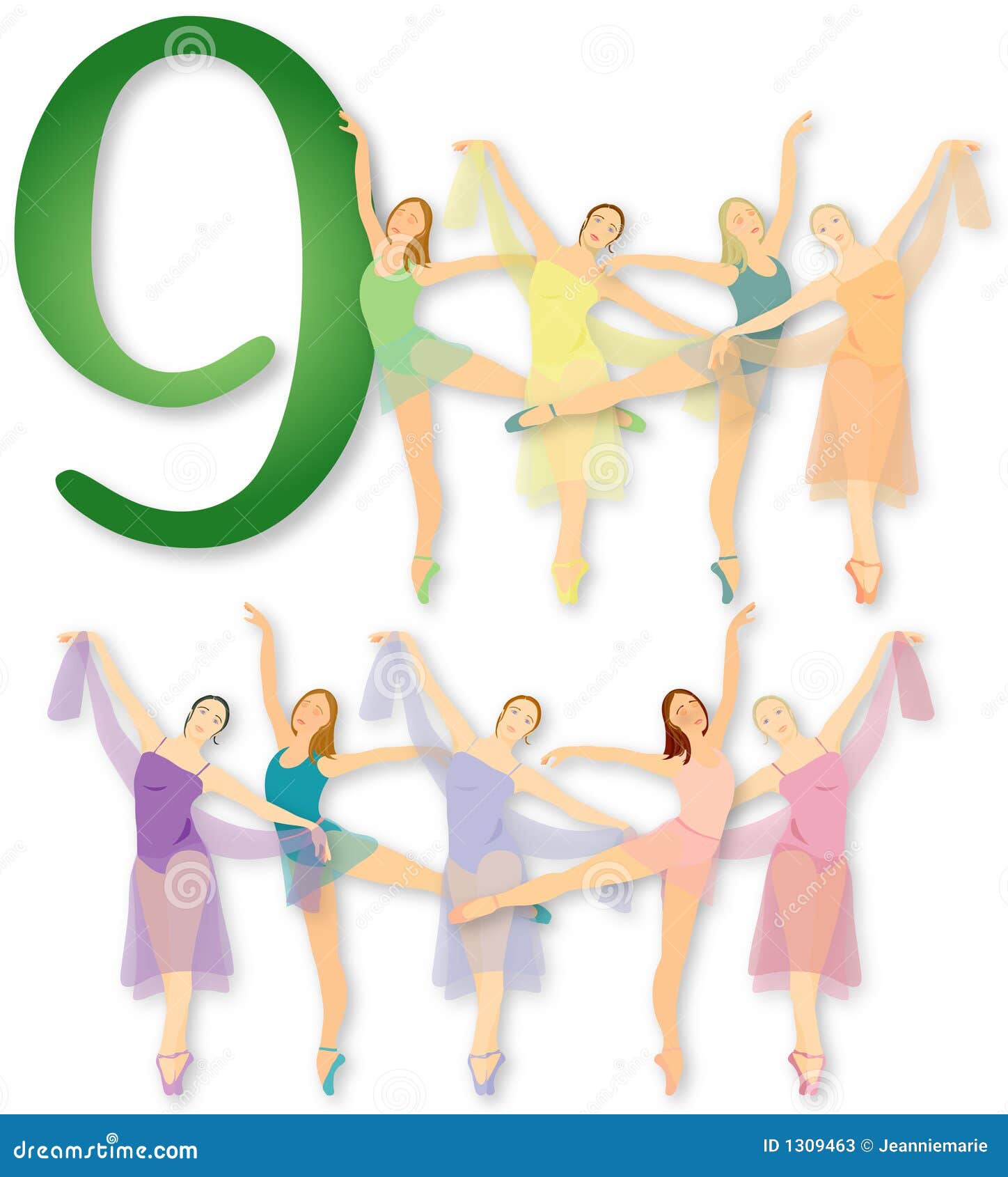 Nine Ladies Dancing allegedly is part of the covert message contained in the original song that allowed Catholics to celebrate their faith in the face of the appalling persecution all done in the name of Christianity. Nine ladies dancing were the nine fruits of the Holy Spirit-Love, Joy, Peace, Patience, Kindness, Goodness, Faithfulness, Gentleness, and Self Control.
However, since between the Catholic and Anglican faiths millions have been persecuted and put to death for their faiths I do not believe they have any place in a song associated with Christmas and the love and unity that it is supposed to represent – so for the purposes of our celebration – it is nine love ladies dancing and enjoying the festive season!

I expect many of you fellow chocoholics were beginning to wonder when I was going to get around to the good stuff! Well here we are on day nine and I think I have shown considerable restraint…For the odd one or two of you who have not been initiated into the wonders of this health bringing delight here is a master class.

The origins of the word chocolate hark back to the Aztecs and “Xocoatl” which was a bitter drink brewed from cacao beans – and the latin name for the cacao tree is very apt – Theobroma cacao which means ‘food of the gods.’ Recent research has revealed that cacao may well have been drunk as long ago as 1400BC. Anthropologists from the University of Pennsylvania discovered cacao residue on pottery in Honduras. It was fermented rendering it alcoholic and therefore may well have been the first ‘Baileys’ so beloved by most of us at all times of the year….

The cacao beans in the intervening 3,000 years or so have always had an important role to play as a currency with one cacao bean valued at a tamale (food wrap) or 100 beans which would have bought you a Christmas Turkey. At 16th century prices that was quite expensive.

The Mayans and the Aztecs, like most of us, believed that the bean had magical and divine qualities and used in the most sacred of rituals. Since many of these involved human sacrifice it is not surprising that to calm the nerves of those about to jump into the fiery volcanic depths or face the chop would be offered a cup of cocao sweetened with the blood of previous victims!

In fact there is a good reason why this ‘nourishment of the gods’ cheers us all up even if we are not facing certain doom.. The chemicals in chocolate stimulate neurotransmitters in the brain that produce a feel good effect. It also stimulates the production of theobromine, which is related to caffeine and apparently produces its renowned aphrodisiac qualities.

The original drink was very bitter like most things that do you good. The Aztecs mistakenly welcomed Spanish invaders into their cultures on the assumption that they were the gods they had been sacrificing victims to for the last millenium.. They offered their most prized possessions in the form of gold and of course their cocao drink which was apparently met with less than glowing reviews. Allegedly one food critic of the time described it as ‘a bitter drink for pigs’. However, like many natural flavoured drinks such as tea and coffee a spoonful of sugar or honey changed the history of cocao for ever.

By the 17th century chocolate was drunk throughout Europe and was given nutritional, medicinal and aphrodisiac star ratings. In around 1828 a Dutch chemist managed to convert the popular drink into its now more familiar form of solid chocolate. By 1850 Fry’s chocolate was on the shelves swiftly followed by Cadburys in England.

It is highly unlikely that an Aztec high priest would recognise any of the many types and flavours of chocolate that are now available but I am sure that he would appreciate that it still maintains its mythical status as ‘nectar of the gods’.

It is estimated that around 30% of us are non-drinkers and then add in those that are going to be driving, have to work in the morning or are on call for their jobs and you can add millions of others around the world who do not want to drink alcohol over Christmas. When we have a party we have always had at least one red and one white bottle of wine that is non-alcoholic.

To be honest they used to be awful but now you can buy some exceptionally good alternatives and because they are still made in the traditional way you get all the health benefits. I have linked to an excellent site in the US Arial Wines which takes you through the process and has won awards for their range. Also a link to a site that lists several high quality brands. In the UK all supermarkets now carry a good range of wines in this category but I do advice you to do your research first and I have a link to the best available.

To finish today I am sharing one of my favourite tenors and actor from Downtown Abbey Julian Ovenden singing Silent Night. Courtesy of  Julian Ovenden – Topic

Thank you for dropping in today and I would love to read your comments… thanks Sally.