Ani and Sue Vincent have been share a wonderful Advent party all through December and on Christmas Eve we were treated to a poem and a miracle that made one little black dog very happy.

Dear Santa, remember that ball that I’ve had?
For several years now…it was getting quite bad…
And all that was left was some chewed rubber stuff,
A vague hint of curve and some once-yellow fluff…
*
I’ve taken good care to be so gentle with it
Not tugged it or torn, so the ball would forgive it,
But age takes its toll and there’s naught that can stop it
Especially when I must ‘fetch it’ and ‘drop it’.

Please head over to read the rest of the story and be amazed at the ingenuity that saved the day: Ani’s Advent Party When Magic Happens

And on the subject of creativity, prolific author and master baker Robbie Cheadle has been working on a fabulous project… I don’t know where she finds the time…

I have finally reached the end of my gingerbread and chocolate Christmas diorama creation. My, what a job its been, but so much fun too. This is the final display!

Head over to see more images of the diorama and the individual masterpieces.. brilliant: Gingerbread and Chocolate Christmas Diorama

On Christmas Eve Miriam Hurdle shared the background to one of our most popular Carols..Silent Night.

Silent Night – The Composition, The Story of WWI, and The Choir 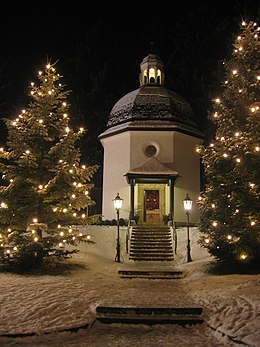 The Silent Night Chapel is located in Oberndorf dei Salzburg, Austria, where the song was first performed

“Silent Night” (German: Stille Nacht, heilige Nacht) is a popular Christmas Carol. The lyrics were written by Joseph Mohr in Salzburg, Austria. The melody was composed by Franz Xaver Gruber, schoolmaster and organist in the nearby village of Arnsdorf.

Before Christmas Eve, Mohr brought the words to Gruber and asked him to compose a melody and guitar accompaniment. The first performance of the carol was on December 24, 1818, in the Christmas Eve mass.

Over the years, because the original manuscript had been lost, Mohr’s name was forgotten and although Gruber was known to be the composer, many people assumed the melody was composed by a famous composer, and it was variously attributed to Haydn, Mozart, or Beethoven. However, a manuscript was discovered in 1995 in Mohr’s handwriting and dated by researchers as c. 1820. It states that Mohr wrote the words in 1816 when he was assigned to a pilgrim church in Mariapfarr, Austria, and shows that the music was composed by Gruber in 1818. This is the earliest manuscript that exists and the only one in Mohr’s handwriting. (Source)

Read more about the carol and the Story of the World War I Christmas Truce of 1914 by Naina Bajekal: Silent Night – The Composition, The Story of WWI and the Choir

And to end today something spicy especially for those of you with snow on the ground and in need of warming up … courtesy of Dorothy of The New Vintage Kitchen where you will find a fabulous range of recipes..

The good news is that we’ll certainly have a white Christmas. The bad news is I can’t find my patio…

They don’t look like much, but this is our family’s favorite cookie. They are humble in appearance, will never be placed in the top of the fancy cookie box, but they are also memorable with their intense flavor, crisp outside and chewy interior.

We were hoping for a white Christmas, and that will be the case this year with cold weather predicted through the holiday and almost three feet of delicious new snow on the ground.

Head over to get the recipe for these delicious sounding cookies: Snow Day Ginger Spice Cookies – The New Vintage Kitchen

Thank you for dropping in today and enjoy your holiday weekend.. Sally.