Since this series began in January 2018 there have been over 1000 Posts from Your Archives where bloggers have taken the opportunity to share posts to a new audience… mine. The topics have ranged from travel, childhood, recipes, history, family and the most recent series was #PotLuck where I shared a random selection of different topics.

It is an opportunity to showcase your writing skill to my readers and also to share on my social media. Which combined is around the 46,000 mark. If you are an author your books will be mentioned too, along with their buy links and your other social media contacts. Head over to find out how to participate: Posts from Your Archives 2021

This is the second post by Abbie Johnson Taylor and is her book review for a book about the iconic actress Sarah Bernhardt by C.W. Gortner. 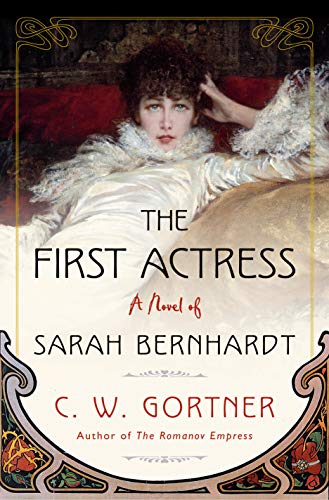 “This novel about Sarah Bernhardt, the iconic French actress, is both a riveting portrait of the artist as a passionate young woman and a luscious historical novel full of period detail.”—Melanie Benjamin, New York Times bestselling author of Mistress of the Ritz and The Aviator’s Wife

From her beginnings as the daughter of a courtesan to her extraordinary transformation into the most celebrated actress of her era, Sarah Bernhardt is brought to life by an internationally bestselling author praised for his historical novels featuring famous women.

Sarah’s highly dramatic life starts when she returns to Paris after her convent schooling and is confronted by her mother’s demand to follow in the family trade as a courtesan. To escape this fate, Sarah pursues a career onstage at the esteemed Comédie-Française, until her rebellious acting style leads to her scandalous dismissal. Only nineteen years old and unemployed, Sarah is forced to submit to her mother’s wishes. But her seductive ease as a courtesan comes to an abrupt end when she discovers she is pregnant. Unwilling to give up her child, Sarah defies social condemnation and is cast adrift, penniless and alone.

With her striking beauty and innovative performances in a bohemian theater, Sarah catapults to unexpected success; suddenly, audiences clamor to see this controversial young actress. But her world is torn asunder by the brutal 1870 siege of Paris. Sarah refuses to abandon the ravaged city, nursing wounded soldiers and risking her life.

Her return to the Comédie and her tempestuous affair with her leading man plunge Sarah into a fierce quest for independence. Undeterred, she risks everything to become France’s most acclaimed actress, enthralling audiences with her shocking portrayals of female and male characters. Sarah’s daring talent and outrageous London engagement pave her path to worldwide celebrity, with sold-out tours in Europe and America.

Told in her own voice, this is Sarah Bernhardt’s incandescent story—a fascinating, intimate account of a woman whose unrivaled talent and indomitable spirit has enshrined her in history as the Divine Sarah.

Abbie’s review of the book

When I was in college, my mother and I once had our palms read at a local fair. The palmist told my mother she had the hands of Sarah Bernhardt. Not knowing who Sarah Bernhardt was, I asked my mother, who told me she’d been an actress. Mother also loved to act and was involved in community theater and directed plays at the college where she taught English and communications. Go figure!

I must admit that if I hadn’t wanted to know more about this celebrity’s life and career, I probably wouldn’t have read The First Actress: A Novel of Sarah Bernhardt after reading Amazon’s detailed synopsis, which tells her story in a nutshell. I was intrigued to learn that one of the online book discussion groups in which I participate would be talking about this book. I’m glad I read it, long as it is. It’s one of those books that is hard to put aside once you’ve started reading it.

I love the author’s first-person narration of Sarah’s story, from her childhood, to her roller-coaster-like acting career, to her success in London, which was a major turning point in her life. It’s amazing how C. W. Gortner got inside Sarah’s head to tell us what she was thinking and feeling all the time. I found the afterword at the end, which provides detailed information about her life and career, fascinating. Even if you’re not into plays, especially older French plays, if you enjoy stories of courage in the face of adversity, you’ll love this book, as I did.

A review for The Red Dress August 2020

Head over to find out how to participate: Posts from Your Archives 2021