In this latest series I am offering authors in the Cafe and Bookstore a chance to promote an earlier book (not your most recent) by sharing an excerpt from the book of 500 words. At the end of the post you can find out how to participate.Smorgasbord Cafe and Bookstore – Share an Excerpt from a previous books 2021 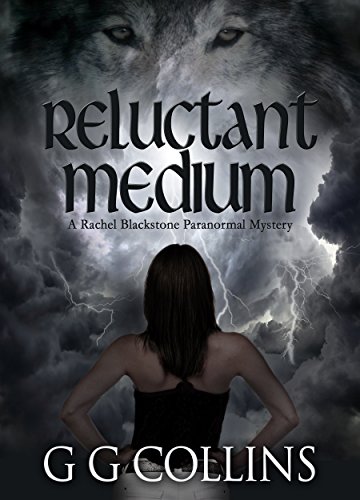 The shaman told Rachel: “Allow the power to flow through you. Don’t try to capture it. You wish only to borrow it.”

All Rachel Blackstone wants is to talk with her father; solve the mystery of how he died. Using a Native American ceremony given to her by a shaman, she summons him in this paranormal mystery. Instead, a soul intent on revenge slips through and threatens people she loves. Now the Santa Fe, New Mexico reporter must follow the evil spirit, uncover its purpose and send it back. The shape-shifter has horrific powers. Rachel is tormented by what she has unleashed. There’s more. She’s seeing dead people; which frankly give her the creeps. Some are helpful; others lead her away from the truth.

One spirit, a lone wolf, seems to have an uncertain allegiance. What she, and friend Chloe—both fledgling women sleuths—uncover is an earthly scam involving both the quick and the dead. Rachel must play a dangerous game of fantasy treasure hunt to stop the ruthless ghost. To survive, she must discover her own psychic powers during a climatic supernatural storm of earth, wind and fire. In this thriller, to fail is to die.

An excerpt from Reluctant Medium

Joseph had not disclosed what would happen, probably because she hadn’t asked. At the time, her father was alive and it never occurred to her she might want to attempt such an experiment. A shape began to form in front of her; subtle colors carried on smoke eddy, sluggishly wrapped around a central shaft of air. Fear kicked in. She expected joy at the opportunity to see her father again, but how would he appear?

Rachel hadn’t considered that possibility. She willed the confusing ethereal episode away. But the coming proceeded. She could not stop it. What was that movie? The Monkey’s Paw? A grieving mother wished for the return of her dead son, only to discover him at the door, not as he lived, but as he died in all its horror.

Rachel continued to watch and wait. New sounds began. Like shot hitting a window in a staccato report, small fragments of matter were being yanked from the gaseous haze only to become magnetized to the core of whatever was developing. The room had become so hot she felt clammy.

“Dad?” she asked cautiously. Instead of her father’s gentle voice another reverberated inside her head.

“Fool!” It streamed through her mind like a banner trailing a plane. “You dare to intrude in things you do not understand. Once you have opened the gates of heaven or hell, there is no return.” Rachel shook her head to clear the disturbing statement. The mask fell, hitting her arm, tumbling to the floor. The cuff link came loose and bounced, stopping near a heating vent. She tried a reality check, reminding herself she was in the living room of her house. Safe. There was nothing to fear, but an occasional mugger or drive-by shooter.

She wanted to stand, but fatigue held her down. Her hand rose to her mouth as a figure materialized. This couldn’t be right, she thought logically. Her father looked nothing like this.

The man was too tall, too dark. She studied the figure searching her memory for a matching image.

“Where’s my father?” Her words were barely audible her mouth was so dry.

“Daddy’s busy.” The voice was contemptuous. “How did you know I wanted to come back?”

She willed her legs to work and pushed herself upright. The twig snapped in her hand, causing her to drop the paho. “No!” The scream of rage caught in her throat, thwarted by the mix of odors.

“You’re sputtering, Rachel.” He knew her! “How is brother dearest? Still looking over his shoulder?” The comment carried a threat.

Before she could think of anything to say, the arrogant spirit hastened to the front door and vanished, through it, beyond it, into the night.

Rachel stared at the door, willing it to reveal the truth of what just happened. She’d made a terrible mistake. “Oh, my god,” she whispered. “What have I done?”

One of the reviews for the book on Goodreads

I totally enjoyed reading “The Reluctant Medium,” and am thankful to see it is a series, so I can look forward to more. A very fast-paced story, yet there are pauses for the reader to recuperate, while the protagonist enjoys her friendships-long-term as well as new and budding-and takes time out to think through the situation in which she has, completely inadvertently, immersed herself and others.

Rachel Blackstone, a reporter, left Santa Fe when she left her husband, moving to Tulsa and experiencing a depressing reduction in her life style. Then her father died in an inexplicable vehicular accident below the Santa Fe Ski Basin, and Rachel is convinced it was more than an accident. An interview with a wise elderly Hopi shaman inspires her to try to recall her father to life temporarily, but instead, the ritual unleashes a “monster,” an evil spirit determined on returning from the dead to wreak havoc and achieve vengeance. The spirit claims a link to Rachel’s brother Chris, disliked mayor of Santa Fe, so she drives all night back to Santa Fe to help. What she finds is a complex of difficulties, danger, budding romance, and tension, which renders the novel engrossing and thought-provoking.

A selection of other books by G.G. Collins

G G Collins writes the Rachel Blackstone Paranormal Mysteries, the Taylor Browning Cozy Mysteries and young adult novels. Her love of mysteries began as a teen when she read “We Have Always Lived in the Castle” by Shirley Jackson. From that time on she loaded up on mysteries from the library: cozy, police procedural and romantic suspense. Later on, it was Stephen King who drew her attention. “That scene when a character looked into her sink at a bowlful of lettuce that filled with blood; I was hooked!” With an interest in many metaphysical subjects and science fiction, she began writing paranormal mysteries. They are infused with Native American traditions and the American Southwest with many of her stories set in New Mexico and Arizona.

G G Collins loves the southwestern US where many of her stories are located. She can be found hiking through ruins of the ancient ones and enjoying New Mexican cuisine. When not traipsing about, she makes up stories with great friendships, quirky characters and, oh yeah, dead bodies. In real life she shares her time with a man, several neurotic—and psychic—cats and the ongoing struggle to grow a garden.

Thank you for visiting today and I know that GG would love to hear from you.. thanks Sally.