Delighted to share the news of a new release by Lucinda E. Clarke –  The psychological thriller –  A Year in the Life of Belinda Brand – on pre-order until May 14th at a special price. 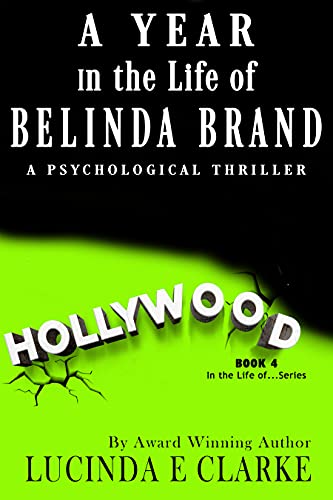 Belinda Brand becomes an overnight sensation when Hollywood offers to make a film of her runaway bestseller. A confident, modern woman, she has the world at her feet – and a secret she is convinced no one will ever discover. Leah, her gentle and long-suffering stepmother will guess, but she would never betray her, or would she?

When menacing notes appear after the Awards ceremony in London and then follow her across the Atlantic, Belinda realizes someone is threatening to expose her.

As she struggles to stay calm, her best friend disappears, Belinda’s celebrity life turns into a nightmare and there is no one she can trust.

If the Brand family thought they could lead a quiet, normal life, they were wrong. Danger continues to lurk in the shadows.

A selection of books by Lucinda E. Clarke

Lesley Hayes5.0 out of 5 stars Another superb book from this award winning author!  Reviewed in the United Kingdom on 15 September 2020

As a long-time fan of Lucinda E. Clarke’s writing, I was delighted to be given a review copy of her latest book. I hadn’t read either of the previous ‘A year in the Life…’ novels, and wondered whether it would spoil my enjoyment to be picking up the story from Deidre Flynn’s perspective. It definitely didn’t! The clever device of three separate journal accounts (written by Deidre herself, Leah, and her niece Belinda), added extra depth and history, and the author skilfully wove the back story contained in the previous books into the narrative, so I was quickly up to speed with the details that led to the ongoing drama.

I won’t reiterate the story itself – the blurb tells you enough – but instead I’ll focus on what a gripping tale it is, with memorable characters and true to life dialogue, and enough plot twists to keep me eager to find out what unexpected happening the storyline would throw up next. There are characters who made me laugh (and not always kindly!) and ones who made my blood boil. No spoilers, so you’ll have to find out for yourself who the heroes and villains are in this superb psychological mystery thriller. Once again, I applaud Lucinda E. Clarke for her mastery as a writer. I’m just going to have to read the first two books now!

Lucinda E Clarke [not her real name] was born in Dublin, but has lived in 8 other countries to date. She wanted to write but was railroaded into teaching. She had a habit of “falling” into other careers, announcing on radio, then scriptwriting for radio and television. She has been a professional writer since 1986 winning over 20 awards for her work, including mayoral speeches, company profiles, drama documentaries, educational programmes for radio and television, adverts, news inserts, court videos, National Geographic, cookery programmes, to name but a few!

She lectured in scriptwriting, had her own column in various publications, and written for national magazines. She was commissioned for two educational books by Heinemann and Macmillan, and book reports for UNESCO and UNICEF.

She graduated into running her own video production company in South Africa.

Thanks for visiting and I hope you will take advantage of the pre-order price for Lucinda’s new book and will check out her others. Thanks Sally.

52 thoughts on “Smorgasbord Cafe and Bookstore – New Book on the Shelves – Pre-Order – #Psychological #Thriller A Year in the Life of Belinda Brand by Lucinda E. Clarke”