In this latest series I am offering authors in the Cafe and Bookstore a chance to promote an earlier book (not your most recent) by sharing an excerpt from the book of 500 words. This series is now closed

Today V.M. Sang shares an excerpt from The Wolf Pack (The Wolves of Vimar Book 1) 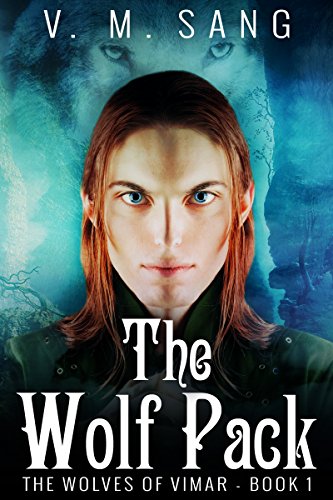 All Carthinal wants is admission to the ranks of the mages. Traveling from Bluehaven to Hambara, where his rite of passage is to take place, he doesn’t expect to end up on a quest to find the long-lost sword of the legendary King Sauvern.

With strangers he meets on his journey, Carthinal sets out on the seemingly impossible quest. Followed by Randa, the snooty aristocratic daughter of the Duke of Hambara, and the young runaway thief Thad, Carthinal and his companions face tragedy and danger.

Watched by the gods and an implacable foe, they will have to accept help from the least likely sources and face their innermost fears. As the fate of their world hangs in the balance, they realize that this is more than an adventure. This quest will change them all.

An excerpt from The Wolf Pack

Close to the beginning of the book – Asphodel, having been sent to the Temple in Hambara in disgrace after disobeying orders in Bluehaven finds the temple in Hambara very severe and thinks her punishment excessive.

Asphodel reached the temple of Sylissa shortly after leaving her friends. Her heart beat faster as she ascended the steps, and her mouth felt dry. What would happen to her? She knew she had been sent here in disgrace and that Mother Caldo could not do any more with her, but what was the Great Father like here in Hambara? He would be stricter than Mother Caldo or she would not have sent her here.

She entered the temple through the great double doors. Inside found herself in a large circular area. Seats surrounded a central altar and windows pierced the walls and the dome high above. These windows concentrated the light so it fell onto the altar and on the alcove opposite the doors. In that alcove stood a life-sized marble statue of Sylissa that glowed as if from an inner light.

The walls of the temple shone with white marble and the floor was paved with a beautiful mosaic showing Sylissa giving the gift of healing to her first priestess. Asphodel stopped to admire the beauty.

“Yes, it makes everyone stop the first time they see it, Sister.” The voice came from behind her.

Asphodel jumped. “Oh! I didn’t hear you coming,” she said. Spotting his deep orange sash she added, “Minister”, bowing her head to a superior.

“Sorry, Sister. I’m Minister Micory. I’m on duty today. Can I help you? I don’t recognise you.”

“I have a letter for the Great Father, Minister Micory. Could you tell me how to get it to him, please?”

“Wait here. The Great Father will send a reply as soon as he is able. I’ll let him know where you are. Use the time in meditation and prayer, Sister.”

Asphodel found herself thinking of the others as time passed. Where were they? What were they doing? Where had Carthinal decided to stay? In the Mage Tower or in the Golden Dragon Inn with the others?

Asphodel sat in the pew waiting for a message, but none came. Minister Micory left and another priest, this one a vicar, took over.

She approached Asphodel. “You are Novice Aspholessaria?”

“The Great Father won’t be seeing you today He’s been called away on urgent business. You’d better stay in the guestrooms tonight. If your letter needs a reply, the Great Father will send a message tomorrow. Follow me, please.”

She led the way to a door to the right of the altar. The vicar stopped at the second door on the right along the corridor.

“You can rest here tonight.” She pushed the door open and stepped back to allow Asphodel to enter. “The evening meal is served in the refectory in about an hour, and breakfast at the second hour in the morning, after the dawn service. You’ll want to attend that. It commences at the twenty fourth hour of the day.”

John Thornton 5.0 out of 5 stars A solidly done, and crafted fantasy novel  Reviewed in the United States on October 6, 2015

“The Wolf Pack” is an original and well crafted fantasy novel. If you like novels like the “Earthsea Saga” by Ursula Le Guin or “When the Heavens Fall” by Marc Turner then I suggest that you may well enjoy “The Wolf Pack.” British style and spellings throughout. Not really a negative, just a difference to be noted.

Positives: I found the characters well developed, and complex (in a good way).

The plot is unique and unusual. It is not easy to explain, but does unfold nicely as one reads through the book. I am trying to avoid spoilers, so I do not want to give too much away.

Dialogue is well written and each character has his or her own voice.

Negatives: It took me a bit to “get into” the book, but that might be because fantasy is not my favorite genre. Some might call this “high fantasy” but I am never quite sure where the lines are on the various types of fantasy novels.  Otherwise a solid book. My rating, A-

Read the reviews and buy the book: Amazon UK –  And: Amazon US

A selection of other books by V.M. Sang

I started writing after I took early retirement from teaching. I taught science, Maths and English at secondary level.

My first book, which morphed into The Wolves of Vimar Series, was based on a D&D scenario I wrote in the 1990s. Since then I have written the second and third parts. I am currently in the process of writing part four.

I have another fantasy two-book series published by Next Chapter, who have also published my other books/ It is called Elemental Worlds, and the books are The Stones of Earth and Air and The Stones of Fire and Water.

I have also written a historical novel set in the time of the Romans in Britain, Vengeance of a Slave.

I live in East Sussex in the United Kingdom. I enjoy doing a variety of crafts as well as painting and drawing and also walking.

Travel is another of the things I enjoy doing, especially to places that have a historical interest. I have been visiting all the places in Germany where J.S.Bach lived and worked.

Another thing I like to do is to cook and I have produced a recipe book of some of my family’s recipes dating back to 1909 a link with history here. (It’s called Viv’s Family Recipes).

Thanks for dropping in today and I hope you will be leaving with some books thanks Sally.

38 thoughts on “Smorgasbord Cafe and Bookstore – Share and excerpt from a Previous book 2021 – #Fantasy -The Wolf Pack ( The Wolves of Vimar Book 1)by V.M. Sang”