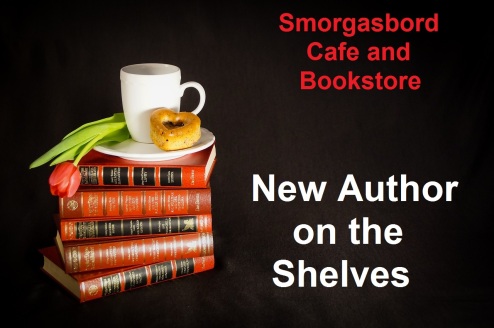 Delighted to welcome Thorne Moore to the Cafe and Bookstore with her books. Today I am featuring her recent release, the science fiction space opera Inside Out. 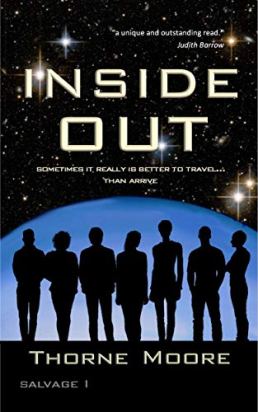 Triton station, Outer Circles headquarters of Ragnox Inc, on the moon of Neptune, is as far as the intrepid can go. It’s a place to make money, lots of money, and for seven lucky travellers, bound for Triton on the ISF Heloise, that’s exactly what they intend to do.

Does it really matter what they want? The journey to Triton will take them eleven months – eleven months to contemplate the future, come to terms with the small print of their contracts, and wish they’d never signed. But changing their minds is not an option.

Sometimes it really is better to travel… than arrive.

judithanne 5.0 out of 5 stars Recommended to Any Readers Who Enjoys Character-led Stories – Whatever the Genre  Reviewed in the United Kingdom on 13 May 2021

For many years I have admired Thorne Moore’s work. She has written in various genres but, threaded through all, there is always a psychological mystery: a need to know why her characters have acted in a certain way, what were the circumstances that “upset the applecart”, as I like to think of it. The mystery may have parallel themes of crime, or the introduction of historical or contemporary, events, or the exploration of relationships, but there is always the psychological ‘why’ lurking. I think this is one reason I have always been gripped by her stories and the intricate ways they move along.

And this smooth progression of the plot is often reinforced by the background of the novel, whether it’s of the countryside and life at a certain era, an old house that’s been lived in by generation, or myths and legends. And, as an added extra, to give atmosphere and emotion to these settings, there are always short evocative descriptions of the weather to reflect the mood of the scene. Wonderful!

So, I have to admit, I was surprised and not a little perturbed to hear she has delved into writing Science Fiction. After all, one of this author’s greatest qualities is her innate ability to bring setting to life, by just a line or two of description that instantly evokes a sense of place and an immediacy to the background that her characters move around in.
I mean, a spaceship in Outer Space! No weather, no interesting ‘moving around settings’ for the characters, no historic background, no real characters (Maybe ET-Type aliens?).

Yes, yes, I know; I have little knowledge of the Sci-Fi genre. Which I was to learn. Very quickly.

It is at this point I always say that I don’t give away spoilers.

But what I will say is that Inside Out is not just science fiction, it is a story that includes all that I admire of Thorne Moore’s writing..

There is mystery and intrigue. Excellent individual dialogue from the brilliantly rounded main characters, all with their own back stories and reasons for being on what initially seems to be a luxurious cruise liner for rich, middle-class passengers. (I say “luxurious” but there is a ‘wait and see’ moment – and that’s all I will say about that). Together, with a cast of minor characters as foil to the main ones, there is crime, danger, adventure, humour, and even a little romance. And … there are brilliant settings: of the layers and decks of the ship, of the various planets that the ISF Heloise docks at, and of a chilling description of outer space. And, then, ultimately, we land on Triton, the destination of the group of main characters, where we are made aware of the truth of life with Ragnox Inc.

All I will say, is that Inside Out is a novel I thoroughly enjoyed and one I would recommend to any readers who enjoys character-led stories – whatever the genre

Read the reviews and buy the book: Amazon UK –  And: Amazon US

A selection of books by Thorne Moore

Thorne Moore grew up in Luton and studied history at Aberystwyth. Nine years later, after a spell working in a library, she returned to Wales, to north Pembrokeshire, to run a restaurant with her sister, and a craft business making miniature furniture. She took a law degree through the Open University, and occasionally taught genealogy, but these days, she writes, as she had always intended, after retiring from 40 years of craft work. She has had four novels published by Honno and two by Lume, all psychological crime mysteries and three of them historical and she is now writing science fiction.

Thank you for dropping in today and I hope you will be leaving with some books… thanks Sally.