Last week I shared my decision to leave the school where I was happily feeding 140 three times a day and managing the housekeeping team… also my application to a hotel in Wales and my arrival outside a gothic mansion late on a cold windy night….

What lies behind the door, Anne Murray and Star Trek

There I am nearly midnight, standing in front of this gothic edifice waiting for those thunderous footsteps to arrive at the door and open it…….

As it did with a bit of a squeak. There stood a perfectly normal looking young man of medium height and build, with a smile on his face.

‘You made it okay then,’ he opened the door wider. ‘I am Richard the manager, come on in and we will get you settled for the night.’

After a quick chat Richard took me back outside and around to the front of the hotel where there were some large windows beneath the long terraced dining-room.

Here I was introduced to my room mates who sleepily grunted hello to me and who I met in the morning. One of them was the assistant manager and the other two were newbies like me and made up the reception staff for the hotel.

The hotel was due to open for Easter so it was all hands on deck for the next few days. The opening weekend was usually booked out by an Insurance company from Liverpool and the kitchens, housekeeping staff were hectic getting the rooms and the menus prepared.

For those of us beginning life working in the hotel it was also a hectic time getting acquainted with all the usual reception duties and processes, but we enjoyed working and living with each other.

The one drawback was that I didn’t drive and on my day off was usually a Sunday. In Gwynedd at the time this meant no public transport and unless I could get a lift into either Dolgellau or Barmouth, I walked the five miles each way to one or other.

This meant that within about six weeks I was skinny as a whippet! 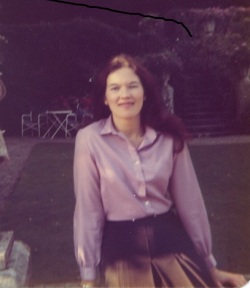 A few weeks into the season and the Assistant Manager who was there for the second year in a row decided to leave and run her own B & B in the Lake District. I was offered her job and one of the perks was my own little flat on the ground floor of the nearby Chapel House, with the chambermaids and waitresses living above me in a number of bedrooms.

This was great and despite the fact that I never seemed to be off duty I loved that spring and summer exploring my local surroundings on foot and meeting new friends. If I was lucky, a friend with a car would organise day trips along the spectacular coast and here I am at the famous Portmeirion.

We had our moments in the hotel as every establishment does and they certainly added some colour to the proceedings. We had a number of celebrities through the restaurant and staying. Film crews for the Holiday programme with Judith Chalmers, The Radio One Road show with Tony Blackburn and Margaret Thatcher’s husband Denis one lunchtime.

I loved the atmosphere and the hectic schedule and largely managed to keep myself out of trouble that first season.  I opted to stay for most of the closed season in my flat in a caretaker and maintenance role in my small flat. That meant that I did even more walking back and forth for my shopping as there was only a small shop in the village. Although I had taken driving lessons at age 17 I had not taken my test so that winter I took the plunge and Mr. Evans from Dolgellau became my driving instructor. It would be August 1980 before I took my test.

I went home to Portsmouth for a few weeks at Christmas and did some temp jobs and then headed back in February to start to get the hotel ready again for the 1980 season.

I had a small transistor radio that went with me everywhere and managed to keep more or less up to date with the charts… One of my favourites was Anne Murray I Just Fall in Love Again.. fabulous singer. thanks tohappysun

I did manage to get to the cinema during the Christmas break and Star Trek The Movie... and whilst I wouldn’t call myself a Trekkie.. we have certainly watched every series since then… thanks toOrange Band Media

Next time 1980 and my divorce comes through on April 1st!!! Just in time for the new season.. I had a few more adventures that season and then in the September I was swept off my feet.