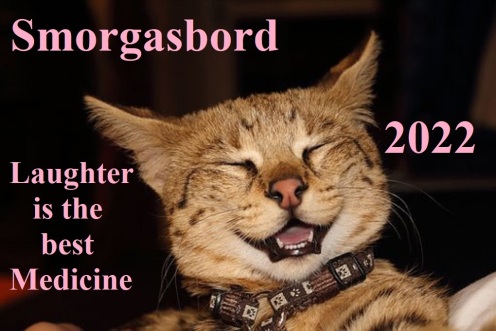 A taste of what is to come in 2022… and whilst I will be cutting back on blogging in general, there will always be room for laughter, not quite as essential as air, water and sustenance, but up there with the top health giving elements in our lives.

I will be posting a Laughter is the best Medicine once or twice a week and will be sharing humour from the archives, the internet and also from special guests including your favourites Debby Gies, Danny Kemp and Martin Allen.

The Health Benefits of Laughter

It is very important that as well as feeding the brain nutrients and supplying healthy fats, oxygen and fluids, you provide it with stimulation.

One of the causes of dementia is lack of stimulation. Visual, aural, verbal. For elderly people the world begins to shrink back until they are restricted in movement within a small space, with perhaps just the television or radio for company. Even with the television you will find that eventually there will only be one or two channels watched; the news, soap operas and more than likely Midsummer murders!

This is why any social interaction is so important as we get older. For most, not all, our natural instinct is to recede to a safe zone but those who do stay in the world and continue to laugh, enjoy new music, movies, plays and group activities, stay mentally and physically healthier.

About 12 years ago my friend and radio producer Kelli Brett and I put together a couple of programmes on the subject of laughter as one of our regular health segments. We called it the Laugh Academy and it went down a storm. It was intended to show how laughter is one of the most beneficial exercises you can participate in without spending a fortune or damaging a muscle – well I believe that there were one or two cases where someone laughed themselves into a heart attack but it was nothing to do with our show – honest.

Laughter is universal – every culture will have its particular funny bone that others would not see the point of, but put most of us in a room with other nationalities and eventually someone will start us off. It might be a stand-up comedian in front of a packed theatre – or it might be round the dinner table after a couple of glasses of good wine.

I think we have all been in the room when for no reason someone we are with starts laughing and can’t stop and we have felt embarrassed… at first.. and then we begin to laugh and soon everyone around you is laughing too… Here is a great example from two laughter experts…Laurel and Hardy Tom Scruffy Cammarata

Children have a natural ability to laugh from a very early age – they are not afraid to express themselves – they do not have years of conditioning about what is appropriate or not. I remember getting a fit of the giggles at my mother’s funeral – imagining her reactions to the proceedings. I only managed to hang onto my decorum by severely grasping my husband’s left thigh in a death grip which to onlookers might have looked equally inappropriate!

It is very difficult to keep a straight face when someone else is hysterical and I dare you not to start laughing when you watch this baby giggling so naturally. BruBearBaby

There are actually laughter clubs around the world where people gather and start a voluntary laughter cycle rather than a spontaneous one.  No humour or jokes involved, just a steady Ha,ha,ha.

Hasyayoga is performed in groups with eye contact and you will be surprised how soon the deliberate laughter turns into the infectious kind we are used to in a crowd.  The belief is that forced laughter holds the same benefits as the naturally occurring variety and here is an example of what you might expect if you join a club. Gulf News

I hope that the last thing I do on earth is to go laughing at one of my husband’s jokes – well some of them anyway!

So it strengthens your immune system, increases your cardiovascular flexibility, makes you think clearly, improves your mood, releases stress, relieves pain, lowers your blood pressure, boosts the entire body and if it is shared with a friend doubles the effects.

There is no doubt that attitude does make a huge difference when you are battling a serious illness and laughter plays a major part in turning infusing the body with a positive energetic and healing environment. 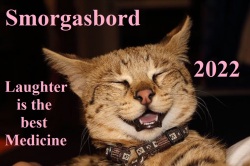 This student got a D for his exam when he should have got an A….

I would have given him 100%! Each answer is absolutely grammatically correct, and funny too. The teacher had no sense of humor.

Q1.. In which battle did Napoleon die? *His last battle

Q2.. Where was the Declaration of Independence signed? *At the bottom of the page

Q4.. What is the main reason for divorce? *Marriage

Q5.. What is the main reason for failure? *Exams

Q6.. What can you never eat for breakfast? *Lunch & dinner

Q7.. What looks like half an apple? *The other half

Q8.. If you throw a red stone into the blue sea, what will it become? *Wet

Q9.. How can a man go eight days without sleeping? *No problem, he sleeps at night.

Q10. How can you lift an elephant with one hand? *You will never find an elephant that has one hand.

Q12. If it took eight men ten hours to build a wall, how long would it take four men to build it? *No time at all, the wall is already built.

Q13. How can you drop a raw egg onto a concrete floor without cracking it? *Any way you want, concrete floors are very hard to crack.

I hope you will drop in from time to time to enjoy this year’s laughter posts enjoy the rest of the holidays…Sally.