I am sure like me, there have been times when you have wondered what difference might have been made to your life, if your younger self had been gifted with the experience and knowledge you have accumulated over the years.

I invited several friends from the writing community to share their thoughts on this subject which I am sure you will enjoy as much as I did.

Today Gwen Plano shares her appreciation of the love and strength she received from her father throughout her life and the lessons she absorbed.

I wish I knew then what I know now. by Gwen Plano 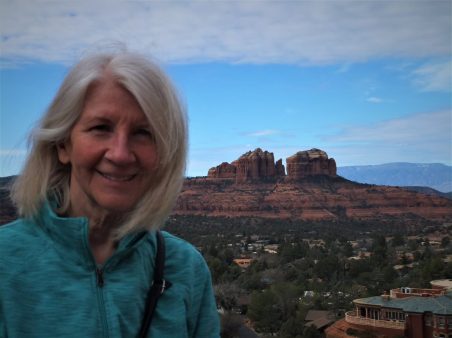 A few weeks ago, in Sedona, AZ

When I was a child, I knew that life had ups and downs. It was everywhere visible on the farm. But I didn’t understand that each moment is a gift. It’s only these latter years that have helped me realize this fact. I’ll backtrack a little to explain what I mean.

Through tears and plenty of fearful situations, my dad would make sure his seven children were safe. When I was thrown from a horse face down on a gravel road, it was my dad who picked me up and took me to the hospital where I remained for the week. When I had pneumonia and could no longer breathe, it was my dad who rescued me. Time and time again, he did that for me and my siblings. And because of his actions, I always knew he would take care of things, take care of me.

What I didn’t know was that there would come a time when I would be on my own. Truly on my own. Such a thought didn’t register when I was young. I wasn’t reflective about life in that way. Dad was there, and he was larger than life. 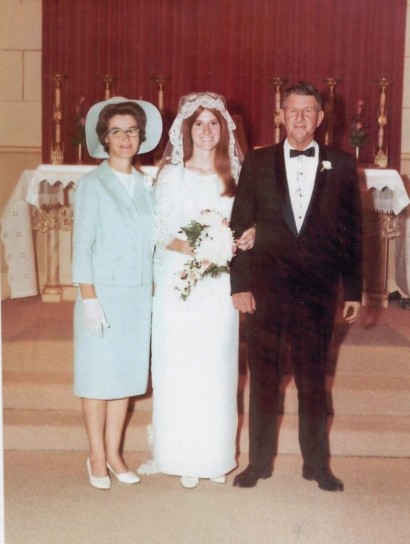 Gwen and her parents at her first wedding.

As I moved into adulthood, my dad slipped slowly to the background and with that movement, I became responsible for my life and soon the lives of my four children. I always worked at one college or another, and when I returned home in the evenings, I attended to other demands. Sometimes life was a blur – diapers to change, little bellies to fill, appointments to keep. And imperceptibly, I slipped into a world that barely included me.

It was tragedy that woke me up, opened my eyes and my heart. And I realized that Dad’s strength was mine. At first, I didn’t understand all the ‘whys’ of the challenges of life. But as the years passed, I began to see the hidden giftedness of those trials. I experienced how pain could bring me into compassion for others, and how fear drew me to a crossroads of choices.

At some point, I stopped thinking in terms of what is fair or not. Life simply isn’t fair in the ways we normally think of it. Rather, I began seeing that life is about learning – learning how to love ourselves and others. Learning about who we are and finding our voice.

Learning about why we are given life in the first place.

Gwen at 22, with her first son. Living in the country, attending Purdue University in Indiana.

When this shift began, I thought a lot about my dad. As a farmer, he wasn’t one for words, but when he spoke, I listened. He lost his arm in a farm accident, but after recovering, he determined he would learn to do what any man could do with his one arm. And he did. “If you put your mind to it,” he’d say, “you can do anything.” I didn’t believe him at that time, but I do now.

As my dad aged into his 90s, he struggled to stand, sometimes to remember. But with a few laughs, he’d claim, “This is better than the alternative.” When he was about 92, I drove him to the hospital for surgery. He asked that I first drive him past his fields. One by one we paused by expanses of wheat, sugar beets, and cotton. Dad would take a deep breath and say, “Isn’t it beautiful, Gwen?” I’d always acknowledge that it was, and in heart I registered that he needed that glimpse of beauty before undergoing a mastectomy for breast cancer.

The above experience prompted the realization that my dad and I were more alike than not. Nothing calms my soul more than nature, and clearly this was true of him as well.
So, what do I wish I knew as a young person that I know now? I wish I really, really understood that though life is full of challenges, every moment is a gift worth embracing. I wish I knew that we are given life to learn and to become more fully the gift itself. I wish I understood that sorrow pursues each of us – the good and the bad, the rich and the poor.

But through sorrow’s arrival, we learn. I wish I knew that beauty is inherent in our spirits, and it can lift our souls during the darkest moments. I wish I knew that Dad not only protected me, saved me, he loved me tenderly – even though he never said the words.

My thanks to Gwen for this post that underlines the need to appreciate that we all face sorrow in our lives but we can learn from this and treasure the support and love others give us.  I know Gwen would love to receive your thoughts on this.

Gwen M. Plano, aka Gwendolyn M. Plano, grew up in Southern California and spent most of her professional life in higher education. She taught and served as an administrator in colleges in Japan, New York, Connecticut, and California. Gwen’s academic background is in theology and counseling. Recently retired, she now lives in the Midwest with her husband and enjoys writing and travel.

Gwen’s first book is an acclaimed memoir, Letting Go into Perfect Love. Her second book, The Contract between heaven and earth, is a thriller fiction novel, co-authored by John W. Howell. It has received multiple awards and is an Amazon Best Seller. The Choice, the unexpected heroes is the sequel to The Contract. It is also a thriller, involving the attempt of an unfriendly nation to take over the world. The third book in the series, The Culmination, a new beginning is an action-packed military thriller that spans the globe and involves multiple Heads of State and the threat of World War III. Only love can change the fate of humanity.

When Gwen is not writing, she out and about in the beautiful Ozark mountains which she now calls home.

One of the reviews for Culmination

Mae Clair 5.0 out of 5 stars A Political Thriller with Strong Characters Reviewed in the United States

Book three in a series, The Culmination reads easily as a standalone novel. A political thriller, that addresses denuclearization, tensions in the Middle East, and the fate of refugees, much of the story echoes current headlines. The plot is complex involving multiple heads of state, along with the strategical give and take of political maneuvering on a global level. The author clearly put an extensive amount of research into this book, and it shows. Adrenalin-fueled scenes alter with more cerebral moments, and even a few romantic interludes.

I especially loved the evolution of the relationship between the two central characters, Margaret Adler, VP of the United States and Ivan Smirnov, acting President of Russia. During the course of the novel those titles change, and we learn more about each, including richly developed backgrounds. I was thoroughly invested in the difficulties Margaret and Ivan faced, both on personal and political levels. Their scenes together were among my favorites of the book. There’s also a young refugee child who factors into the story and who stole my heart.

A unique combination of character-driven and plot-driven fiction, I recommend this compelling tale to readers who enjoy strong character development and complexly-plotted intrigue.

Thanks for dropping by today and it would be great if you could share Gwen’s post. Thanks Sally.

127 thoughts on “Smorgasbord Blog Magazine – Guest Post – I Wish I Knew Then What I Know Now! by Gwen M. Plano”