Delighted to welcome Brendan James to the Bookshelf with his recently published debut novel. Gerard Philey’s Euro-Diary: Quest for a Life

‘Could there be a world of interest and adventure beyond the Midlands? A world of confidence, sex and excitement? A better life – a better me?’ These are the questions Gerard Philey grapples with over New Year, 1995. Sitting in his rented Black Country room, reflecting on his thankless teaching job and miserable love life, he courageously decides to abandon his humdrum existence and embark on a quest for Euro-fulfilment, fun and fitness on the Continent.

After a shaky start in Brussels, events manoeuvre him to Amsterdam where chance encounters shift his world well and truly into fifth gear. He samples the trials and tribulations of new relationships, alongside managing a sex shop in the city’s Red Light Area – on top of the challenges of fat-free living and international travel!

Through his bittersweet diary, we see how Gerard steers a laugh-out-loud course through farcical episodes and fanciful characters…and how entanglements from past and present draw him unwittingly into a criminal underworld where events ultimately take their toll.

Helen Grundy 5.0 out of 5 stars Gorgeous little book! Reviewed in the United Kingdom on 27 March 2022

What a totally gorgeous read! Very ‘Adrian Mole’, heartwarmingly funny and quite poignant. The book moves at a brilliant pace and it’s funny how you can get a feel for who to love, hate, trust and mistrust in characters who are presented in such short bursts with the diary style. I found myself ‘just reading one more day’ as the drama of Gerald’s new life unfolds in Amsterdam and it was a book I was sad to finish. I can’t find any more by this author but I’m really hoping there’s one in the pipeline as I want to know what happens next. A lovely read for a holiday to make you chuckle. 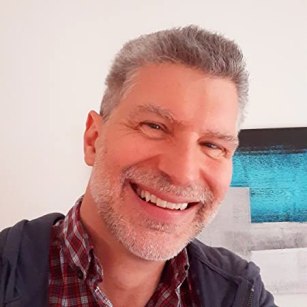 Brendan James is the author of the new comedy novel, “Gerard Philey’s Euro-Diary: Quest for a Life”. Though this is his first novel, he has a large number of non-fiction publications (under the name Brendan Bartram) as a former university lecturer and researcher. A passionate linguist and Europhile, he spent a number of years working in the Netherlands, France and Germany. He lives in the West Midlands with his husband. Many thanks for visiting his page and for your reviews!

38 thoughts on “Smorgasbord Bookshelf – New Book on the Shelves – #Humour – Gerard Philey’s Euro-Diary: Quest for a Life by Brendan James”