The first book today is a poetry collection by Bette A. Stevens – My Maine – Haiku through the seasons.

Inspired by The Pine Tree State—Maine’s diverse landscape, natural beauty, rural communities, and independent people—the author’s 150 haiku poems, along with her photographs, reflect the Maine she knows and loves. Bette A. Stevens’s imagery draws the reader into her world of wonder and delight. My Maine takes readers on a poetic journey through Maine’s four seasons. Whether you’re a native Mainer or from away, Stevens’s short story poems and photographs will resonate.

The collection opens with a haiku tribute, “Maine Pines and People.” The journey continues with the rejuvenating spirit of “Spring Awakenings” and “Summer Songs”; then on to more of the magic and majesty of the places and people of Maine in “Autumn Leaves” and “Winter Tales.” This is a poetry collection to be slowly savored, made even more delectable with the author’s original drawings and photographs. In addition to its poems and photographs, My Maine includes state symbols and interesting facts about The Pine Tree State.

Elizabeth Gauffreau5.0 out of 5 stars For Readers Drawn to the Constancy of the Seasons  Reviewed in the United States on May 16, 2022

I was first drawn to Bette A. Stevens’s poetry collection, My Maine: Haiku through the Seasons, because I have connections to Maine myself, and I’ve become interested in syllabic poetry the past few years. For readers with similar interests, I would recommend My Maine as a must-read. For general readers, I would highly recommend the collection just for the sheer enjoyment of it.

The paperback is beautifully laid out with color photographs emblematic of a particular mood of the season. On the facing page, a series of haiku speak to each photograph. The book also features appealing section dividers and lettering. I mention the book design because it added another dimension to my reading experience, which I appreciated.

In terms of form, haiku aligns perfectly with observational nature poetry. The poems in My Maine follow the traditional 5-7-5 syllable count used for haiku written in English. They break with tradition by employing metaphor, alliteration, and rhyme. For me as a reader, this breaking with tradition to serve the needs of each poem ensures that the collection as a whole is more than an exercise in form. (Form purists may disagree with me!)

I read the book twice, and my experience reading My Maine for a second time was quite different from my first reading. With my first read, I wished that each poem had been placed on its own page, so that I could savor them individually without being distracted by the others.

The second time I read the book, I immediately realized that the placement of several poems on the same page was not a design layout decision. Each series of poems can actually read as a single poem moving through a progression of thought. The fact that my second reading experience was different from my first is the hallmark of a book that is rich in nuance, cohesion, and resonance.

I cannot end this review without citing my favorite poem from the collection:

Potholes irk drivers
As roadways turn to washboards
Kids giggle in back.

Finally, I highly recommend My Maine to anyone looking for a constant in tumultuous times. The book will be a comfort.

Read the reviews and buy the book: Amazon UK – And: Amazon UK

Also by Bette A. Stevens for Children and adults

Read the reviews and buy the books:Amazon US – and : Amazon UK – Follow Bette:Goodreads – Blog:4 Writers and Readers – Twitter:@BetteAStevens 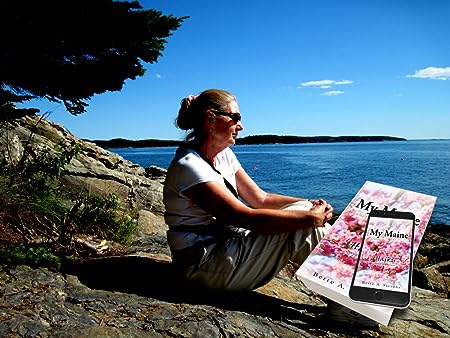 About Bette A. Stevens

Inspired by nature and human nature, author Bette A. Stevens is a retired elementary and middle school teacher, a wife, mother of two and grandmother of eight. Stevens lives in central Maine with her husband on their 37-acre farmstead where she enjoys reading, writing, gardening, walking and reveling in the beauty of nature. She advocates for children and families, for childhood literacy and for the conservation of monarch butterflies (milkweed is the only plant that monarch caterpillars will eat). The author has also published the photography and poetry collection MY MAINE: Haiku through the Seasons

Stevens’s children’s book, THE TANGRAM ZOO and WORD PUZZLES TOO! was first published in 1997 by Windswept House Publishing, Mt. Desert, ME; a second edition was self-published by the author in 2012. AMAZING MATILDA, Stevens’s second children’s book, self-published in 2012 won a 2013 Purple Dragonfly Book Award (Honorable Mention for Excellence in Children’s Literature – Ages 6 and older category) and also placed #9 on The 2013 Gittle List for Self-published Children’s Picture Books. Stevens has written articles for ECHOES, The Northern Maine Journal of Rural Culture based in Caribou, Maine. In 2013, the author published her first book for the YA/Adult audience: PURE TRASH, a short story of a boy growing up in rural New England in a family whose poverty and alcoholism mark him as a target for bullying by young and old alike. This short story is a prequel to Stevens’s début novel DOG BONE SOUP (KCT International Literary Award Top Finalist 2017).

The next book today is David’s Bin Day from the prolific children’s author and teacher Sue Wickstead.

As a bin lorry clatters down the street one morning, a little boy is watching with interest.

Just like the binmen, David is wearing his brightly coloured bobble hat, and he is ready to tidy things up.

But everything in his home begins to disappear!

And what happened to Daddy’s important letter?

“David’s playtime adventure stirs up a bit of trouble in this sweet book about playing pretend.” Sarah Flores, Write Down the Line.

David loves Wednesday’s as it’s Bin Day Collection and he loves nothing better, than watching the Refuse collection.
He even has he’s own Bobble Hat just like them.

Once the collection has finished David sets out to pretend to be a Binman, collecting all the rubbish he finds laying around the house… nothing is safe when Binman David is on the case! lol

I really enjoyed this light hearted picture book. Children will definitely be able to relate to the story as refuse collections happen every week. The only thing lil thing is some might prefer the terminology refuse/waste collectors instead of binmen.
It also teaches children to pick up rubbish and throw it away and to pick up toys after they have been played with. So it teaches children about responsibilities and even you could talk further and discuss recycling etc …

Once again Sue has written a Heart-warming story, with beautiful illustrations and relatable characters.

The length is perfect for younger readers and I think it’s best suited to ages 4-8years.
If you haven’t yet had the opportunity to read more of Sue’s books, then I highly recommend you do ( see my blog for more books) I can’t wait for Sue’s next book!

A small selection of books by Sue Wickstead

Sue Wickstead is a teacher and an author with Award winning books.
Shortlisted in the Wishing Shelf Book awards. and has written children’s picture books with a bus theme. In addition, she has also written a photographic history book about the real bus behind her story writing.

Her bus stories are about a playbus. Have you ever been on a Playbus?
When Sue’s two children were young, they attended a playgroup on a bus, but not an ordinary bus taking you on a journey, exciting though this is, but a Playbus stuffed full of toys to capture their imagination!

For over 20 years, alongside her teaching career, she worked with the charity, the Bewbush Playbus Association.

As part of the committee she painted the bus, worked in the groups, helped raise the profile of the project and its work and was part of the team involved in raising funds to replace the old bus with a newer vehicle. This led her to write a photographic history book about it.

‘It really was a fun journey to be involved in’, said Sue. The bus really got into her blood and became a work of the heart.

Having written the history book Sue soon found that many children had never been on a bus before, let alone a ‘Playbus’ and they wanted to know more. So, she decided to write a fictional tale, his number plate JJK261, gave him his name.

‘Jay-Jay the Supersonic Bus,’ came out in print in 2014. It is the story behind the original project and is his journey from a scrap-yard to being changed into a playbus for children to play in. From Fact to fiction the bus journey continues.